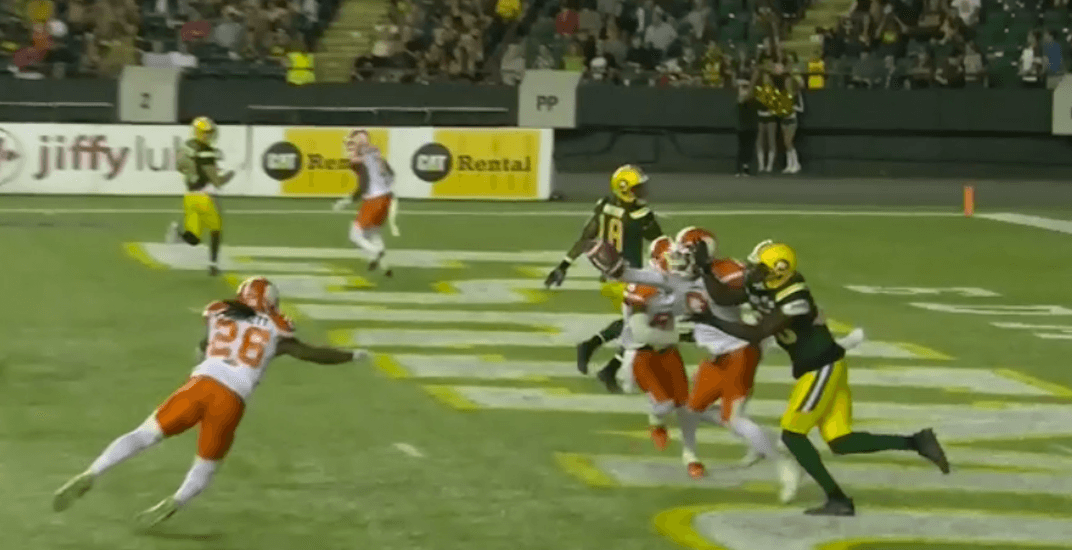 Video replay is an important tool in nearly every sport.

With elite athletes moving at high speed, it’s impossible for referees to get every call right. And when that affects a big moment in the game, fans want to see the correct call being made.

But something is broken with the CFL’s video replay system.

The BC Lions lost 37-26 on the road to the Edmonton Eskimos on Friday, in a game they probably deserved to lose.

But when video replay results in a reversal of the correct call in favour of the wrong call, you can’t help feeling hard done by.

With the score 23-20 for the Eskimos early in the fourth quarter, they gambled on third and goal from the 14-yard line.

The bizarre decision came about because kicker Sean Whyte was injured moments earlier.

If you are wondering why the Eskimos didn't go for the traditional convert and a 10-point lead, kicker Sean Whyte is hurt and not returning.

Without a backup at Whyte’s position, Edmonton would play the fourth quarter without place kicking being an option.

An attempted pass to the end zone was knocked down by Lions DB Loucheiz Purifoy. It was a great defensive play and a huge break for BC, who would get the ball back trailing by three.

…until video replay got in the way.

Purifoy’s reaction said it all:

The soft PI call gave Edmonton another chance, which they converted on with a touchdown to take a nine-point lead.

It should also be consistent. Lions head coach Wally Buono threw a challenge flag later in the game after similar contact, but was denied.

Just to be clear, I thought on field officials did a good job tonight..now the command centre is a completely different story.#terrible

If that’s the standard for pass interference, I’m afraid there’s going to be a hell of a lot of penalties and challenge flags in our future.

Injured kicker was a blessing in disguise

Having an injury to your kicker is not usually a good thing, but it was in this game for Edmonton. After ending up with a TD with the help of the bogus video replay decision, they capitalized on the blessing in disguise on their next possession.

Facing third and 11 from the BC 26-yard line, conventional wisdom would be to kick a field goal with a nine-point lead. Instead, they gambled and converted again. It led to another Edmonton touchdown to give them an insurmountable 37-20 lead.

The high point for BC

The Lions trailed for most of this game, giving up a touchdown on the first possession. They trailed by 14 at one point in the second quarter, and by 10 points at half time.

BC erased the deficit quickly in the second half though, with Ty Long kicking a field goal on their first possession and Jeremiah Johnson scoring a touchdown on their second drive of the half.

Credit to Buono for choosing to gamble on third down, needing three yards on the Edmonton five-yard line. Travis Lulay scrambled, and Johnson got open for a TD reception on what was a huge moment at that time in the game.

The talking point coming into the game was the matchup of best friends starting at quarterback.

Lulay and Mike Reilly – former teammates in BC – faced each other for the first time since 2013.

Statistically, it wasn’t a mismatch.

The only thing Reilly had over Lulay was the ability to stretch the field, as he did on a remarkable 108-yard touchdown reception by Vidal Hazelton in the second quarter.

Stretching the field is something the injured Jonathan Jennings – who dressed as the Lions’ third-string quarterback on Friday – can do. Jennings is expected to be ready to play in two weeks.

With a 4-2 record, BC sits in second place in the West, trailing only the 5-0 Eskimos. The Lions return home to BC Place next week for a Saturday afternoon (4 pm) game against the Saskatchewan Roughriders.