An exhaustive experience of repetitive cycles of the subjective body in an objective space, Donna Redlick’s Body as Site elicited the human errors in measurement and emphasized the gestural base of human movement to be calculated and well-designed. Presented in partnership with the Roundhouse as a Dance Installation Event, Body as Site created an atmosphere of skin-tingling immersion paired with an opportunity to observe and question bodies in the space.

Redlick’s process and research drew on the history of measuring – which originated in the human body and evolved into universal concrete numbers and units – to reexamine the body’s ability to measure, build, and create. Reading the terms “objective” and “subjective” in the program notes, I was compelled to see the performers as bodies, moving machines, meant only to perform physical tasks in a physical space with no sense of humanity or personality. Yet I still noticed narratives and relationships between the performers that constructed their own structures within the physical arrangements being assembled in the space. 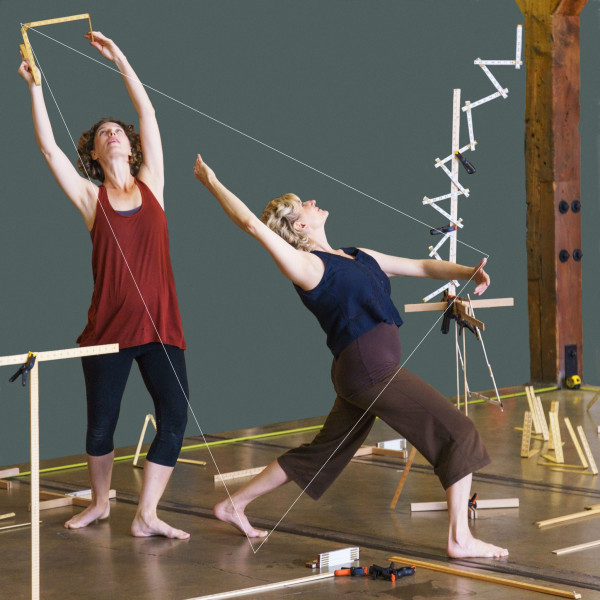 Marked by foldable rulers, Donna Redlick’s first steps into the space immediately brought attention to the inherent inaccuracy of measuring by hand – asymmetrical and uneven, the spacing of Redlick’s step-markers starkly contrasted the square and framed space they cut through. Filling the space with movement explorations that highlighted the beauty of the body’s asymmetry, the four dancers, Salome Nieto, Mirae Rosner, Amy Woods and Donny Redlick, physically showed how the natural roundness of human movement and the ease in which the performers utilized their physical abilities mimicked the rigidity and linear exactitude of measuring devices of all sizes.

From the simple comparison of the human form against the impersonal rulers I drew a parallel to the malleability and adaptability humans possess to evolve under pressure – the bodies in the space became a site for stories and a place for experimentation.

The Roundhouse was set up in an intimate gallery-like setting where the audience was invited to move around the performance space and play with the proximity between themselves and the performers. Some audience members remained in one spot for the shows entire duration, but I rummaged about, sat near, stood far, and paced around the space to challenge my perception of how I saw the two dimensional props interact with the fluid bodies. The well-lit space created a dynamic that visibly engaged the audience with the performers, yet unsuspectingly forced the audience members to engage with one another. 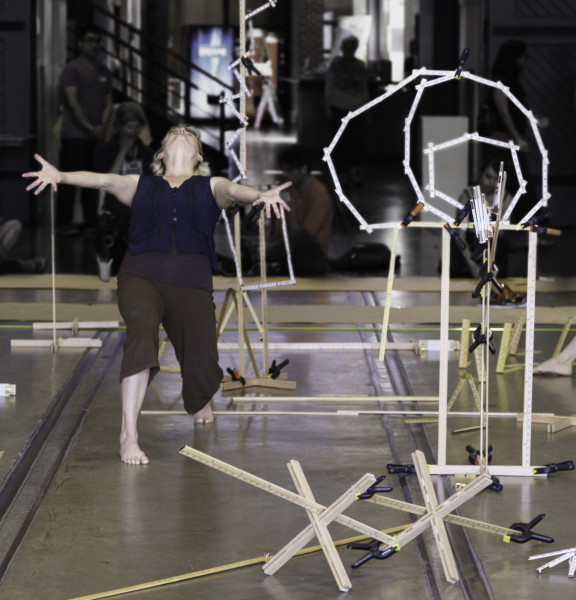 With the central focus of the space being the performers, Body as Site was aptly described as an installation that could be installed into any space. However, as an installation, it progressed slowly (with a two-hour duration, things progressed at a snail-like pace) and the quality and dynamic of movement was rarely increased or decreased. I would have loved to see humongous physical movement and snappy isolations to evolve the contrast between the body and the space’s construction. Thankfully I had the challenge of moving around to keep myself engaged in the moments of monotony.

The dialogue created during the performance between the second, third and fourth dimensions was intriguing, but the dialogue became monologues through the performer’s attention before I could find a connection or through line between myself as the audience, to the performers, and to the space being constructed. Regardless, Body as Site left me questioning how swiftly we problem solve human errors of measurement and examine the importance of proximity. Donna Redlick’s rigour of research has emphasized the curvaceous natural world’s coexistence with angular and rigid “man-made” artifacts.