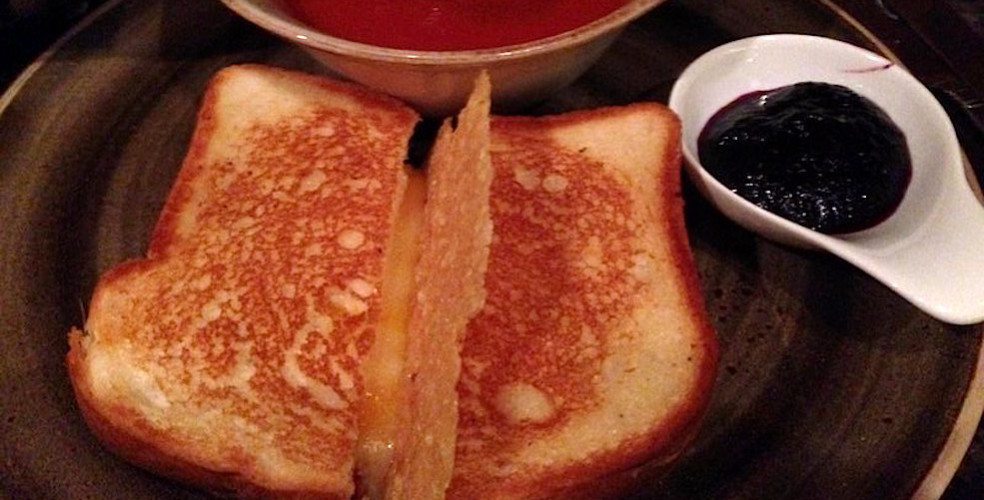 “The Rennie” Grilled Cheese is on the YEW lunch menu, and is described simply as having “Aged Farmhouse Cheddar, Heirloom Tomato Soup.”

We love a good grilled cheese, and often file them in our ongoing Cheap Eats series (even a basic one at Mom’s Grilled Cheese truck won’t totally break the bank), but the duo of legendary local real estate marketer Rennie and some grilled bread and melty cheese with a hefty price tag is possibly even more delicious than the combo of sandwich and soup itself.

Considering that YEW is well-known for being a power-player lunch spot in the downtown core, the naming and the pricing isn’t too surprising, but the sandwich has already gotten a little media attention and of course, there has been some fun(ny) reactions on social media.

The Bob Rennie grilled cheese sandwich costs $23, and yes, you’ll have to trust me because no, I’m not hyperlinking to Vancouver is Awesome

Basically what I’m saying is I don’t think a grilled cheese should be $23 and I don’t like Bob Rennie and I am somewhat emotionally fragile. — Emily Wight (@emvandee) October 26, 2015

However, no one had quite as much fun with the tidbit as local journalist Justin McElroy, who first shared some witty observations about the Rennie Grilled Cheese, then did a tweet-by-tweet telling of his day-off hands-on research experiment of going to YEW to try the sandwich himself.

“Rennie said that in Vancouver, the dream of everyone having a soup+sandwich combo was dead. Denser, sandwich-only combos are the future.”

“@MayorGregor defended the $23 Rennie sandwich, saying the city ensured there would also be affordable yam fries for 20% of the restaurant.”

It’s my day off. I pretty much have to eat the $23 grilled cheese sandwich/tomato soup combo named after Bob Rennie today, right? — Justin McElroy (@j_mcelroy) October 27, 2015

Have made my way to a (hotel) tower to try Bob Rennie’s $23 grilled cheese sandwich. There’s a line, of course. pic.twitter.com/7SjTnfUjA9

Can confirm “The Rennie” costs $23. But look at every other option. Is Rennie an unfair scapegoat in this matter? pic.twitter.com/OiDlAfQFnb — Justin McElroy (@j_mcelroy) October 27, 2015

The Rennie has arrived! The key, value-added touch that justifies the $23 price is the blueberry jam. pic.twitter.com/9rMkjC4kBj — Justin McElroy (@j_mcelroy) October 27, 2015

There’s a lot of aged farmhouse cheddar in the Rennie. And it’s good! But it’s still cheddar and bread for $23. pic.twitter.com/tODMsRM3qW — Justin McElroy (@j_mcelroy) October 27, 2015

And outside the scones I really have no clue what the blueberry jam accomplishes. It is the Rennie’s second kitchen. pic.twitter.com/xokHdkivz6

When you think about it, it makes sense that Bob Rennie’s $23 sandwich in a hotel. Implicitly marketed to people who don’t live here. — Justin McElroy (@j_mcelroy) October 27, 2015

Including tip, $27.77 for a grilled cheese, soup, and high-end blueberry jam. Work will expense this, right? pic.twitter.com/kOdVPHALEb

Verdict: the Rennie is well marketed with no real drawbacks, stupidly overpriced, but will still sell. Would you expect anything less? — Justin McElroy (@j_mcelroy) October 27, 2015

Thank you, Justin, for not only doing this investigation and tweeting it, but also for letting us use the tweets in this story. Really, Vancouver thanks you. You totally took one for the team.

We asked the media liaison for the Four Seasons Vancouver and YEW about the sandwich, and they told us this:

In keeping with our flair for creativity, a sense of humour and a touch of rebelliousness, YEW seafood + bar strives to deliver delicious food with our legendary Four Seasons service in a fun, welcoming atmosphere for all guests – whether you are joining us for a grilled cheese sandwich or whatever your palate desires.

It will be interesting to see if many locals will be biting when it comes to this new sandwich offering in town. We’ll also keep our eyes out for the very meta event of Rennie eating The Rennie.