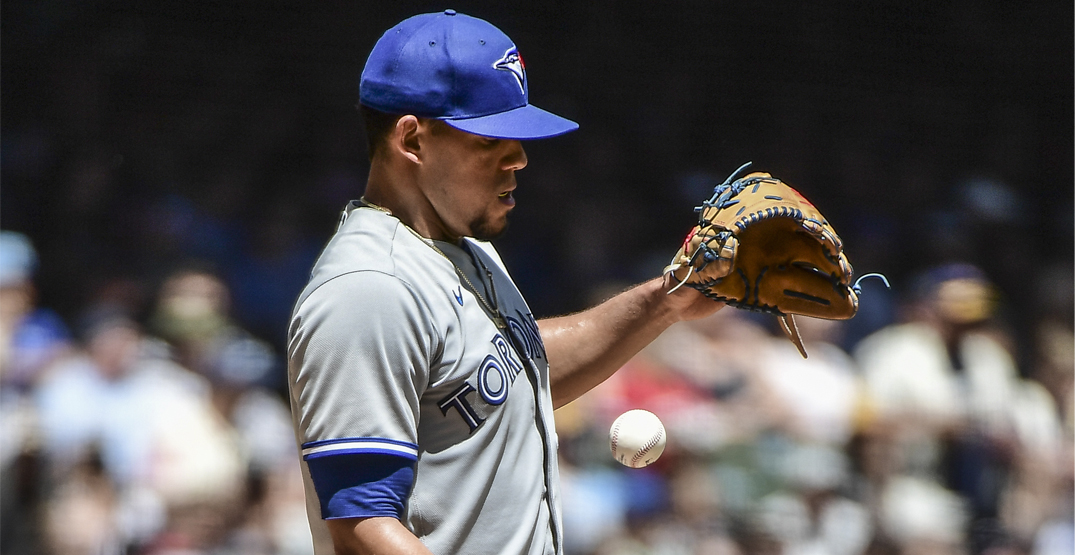 What was once perceived as a strength for the 2022 Toronto Blue Jays has suddenly become a weakness. On paper, they went into this season with one of the best rotations in the American League.

After 62 games and entering one of the most crucial stretches of their campaign, some the Blue Jays’ starting pitchers are falling apart at the seams, and the timing couldn’t be worse.

Toronto’s most hot-and-cold starting pitcher, Jose Berrios, served the latest disappointment on the mound. After surrendering eight runs to the Milwaukee Brewers on Sunday, he failed to escape the third inning. It’s the third time that’s happened this season.

Pair Berrios’ struggles with that of Yusei Kikuchi, who’s also had a rough go as of late. In his latest start this past Friday, he failed to escape the third inning as well, tasking the Blue Jays bullpen to pick up six innings of work.

The Blue Jays own the 20th lowest starting rotation ERA this month of June at 4.72, and their overall team ERA of 3.91 ERA slips them to 13th overall in MLB. Coupled with some recent bullpen troubles, the Blue Jays pitching staff is worse for wear.

Toronto’s starting rotation has experienced some rough sailing as we approach the mid-point of the season. Hyun-Jin Ryu is out for the year with Tommy John surgery. Berrios and Kikuchi are sporting ERA’s north of 5.86 and 5.08.

It’s a problematic trend and surely setting off alarm bells in the Blue Jays front office. This past winter, they signed Berrios to a seven-year $131 million contract extension, and inked Kikuchi to a three-year $36 million dollar deal. Despite their issues, these guys aren’t going anywhere soon.

Alek Manoah, Kevin Gausman, and Ross Stripling have all performed admirably, but those other two slots have turned into huge question marks as of late. Which means the Blue Jays have a huge starting pitching problem.

With Kikuchi, limiting damage in the first inning has been his fatal flaw. Opponents have a 1.013 OPS against Kikuchi in the opening frame, and if he somehow turns the lineup over a few times, the opponents’ OPS balloons from .888 in their first plate appearance to 1.093 in their third.

It’s almost as if Kikuchi is pulling the reverse Robbie Ray from 2021. Kikuchi’s first pitch strike percentage is down 7.3% compared to last year. He simply isn’t attacking the zone, and opponents are making him pay for it.

Kikuchi’s 9.39 ERA in June is already one of the top-15 worst months for a starting pitcher in Blue Jays history. And his rotation-mate Berrios isn’t far behind with a 6.28 ERA in five starts this month.

Regarding Berrios, his inability to miss bats as of late is incredibly concerning. In his second last start against the White Sox, the Blue Jays right hander induced two swings and misses. And against the Brewers, only four whiffs in 2.2 innings of work.

Toronto’s lineup has held up their end of the bargain and started scoring runs at a regular pace again. But now that dichotomy is out of sync again, and despite some impressive offensive numbers, the starting pitching is hemorrhaging badly.

Losing Ryu for the season was a big blow to the rotation, but Stripling’s emergence helped cushioned that loss. For the other two slots in the rotation, the Blue Jays are in a much more precarious position.

They can’t jettison Kikuchi’s contract in year one, and Berrios is a mainstay in their starting rotation. The Blue Jays haven’t been shy about eating contracts if necessary (see Shun Yamaguchi and Tanner Roark last year), but these are much different scenarios.

There aren’t many other options for the Blue Jays but to run Berrios and Kikuchi out there every five days. So, unless a trade materializes soon, it’s incumbent on the Blue Jays to help both starters make the adjustments to right the ship again.

With few options in the minor leagues (none all that intriguing, to be honest), to steal a quote from Charlie Montoyo during the disastrous 2019 Blue Jays season: “We don’t have anybody else.”

Until a few weeks ago, bullpen help was arguably the number one priority heading into the trade deadline, but considering how leaky this rotation has fared, I’d argue a starting pitcher (or two) should be at the top of the wish list for GM Ross Atkins.

The Blue Jays find themselves 12.5 games back of the AL East division lead, and while it’s not completely insurmountable, that’s a lot of ground to make up on the 53-20 Yankees. The most realistic playoff aspiration for the Blue Jays is as a Wild Card team.

But if they do nothing, and hope that Berrios and Kikuchi turn their seasons around, Toronto might fall out of the Wild Card race as well. So it’s never a bad thing to bring in reinforcements, just in case.

It’s a dangerous tightrope which the Blue Jays are walking on right now. They aren’t burying themselves by keeping Berrios and Kikuchi in the starting rotation, but if their collective slides continue any longer, some sort of intervention has to take place before the Jays find themselves on the outside looking in for a playoff spot.