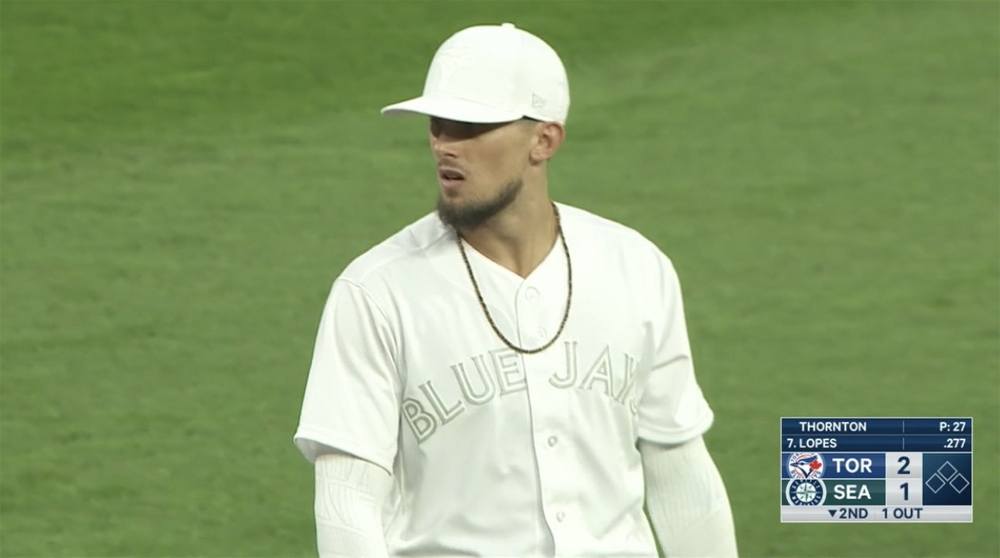 Major League Baseball made an interesting choice for this year’s Players’ Weekend uniforms by asking teams to wear either all-white or all-black numbers for the August 23-25 games.

Judging by the response from social media, those uniforms should have never made it past the prototype stage. As the visiting team at T-Mobile Park in Seattle, the Blue Jays sported monochromatic white uniforms, while the Mariners wore all-black uniforms.

These uniforms elicited a great deal of response from fans, writers, and broadcasters alike, and most was negative feedback. If it seemed the Blue Jays looked like a boy band on the field, they did.

I'm looking at the uniforms the #BlueJays are wearing and all I can think of is… pic.twitter.com/UKh9vezJ5h

Or maybe you were expecting them to swing by on an ice cream pedal cart with a freezer full of Bomb Pomps and Drumsticks?

It almost looks like somebody forgot to add colours to the uniforms and helmets before these things went out to the players.

These guys could’ve also doubled as cricket players with their all-white numbers.

“Fancy yourself a cricket match?” pic.twitter.com/WbRTBjhEDG

The tradition of door-to-door milk delivery has been dead for decades, but maybe the Blue Jays might look at reviving that time-honoured practice?

The #BlueJays will also wear these uniforms when they deliver milk in the morning. pic.twitter.com/av7ozCPNdM

I swear I'm not a get-off-my-lawn type, but #Bluejays look like a group of cricketers and I don't even know what to say about the black-on-black #Mariners are wearing.

Players' Weekend is fun and all, but this is just a terrible, terrible look.

Maybe you like the Players Weekend uniforms, maybe not (personally: nope)

Regardless, uniforms normally serve a practical purpose (home team in white, number/name easy to see,
umps in black are easily distinguished from players)

Even Kristen Smoak, the wife of Blue Jays’ first baseman Justin Smoak (and their daughter) felt the same way about what the Blue Jays wore on the field.

These uni’s are kind of the worst look I’ve ever seen… and this is what my child looked like at dinner tonight pic.twitter.com/CFkKwshabn

Or hey, maybe this was just Major League Baseball’s way of promoting their Field of Dreams game next summer by having half of the teams wear all-white uniforms?

“The Blue Jays look like they just walked out of a corn field to play this game.” – @SNETCampbell Absolutely brilliant.

At the very least, this look translates as evening attire.

The white cap, the long chain, the goatee: Cavan Biggio is every guy waiting in line at a Fox & Fiddle in Richmond Hill. pic.twitter.com/o6EPv1Ocjh

Believe it or not, the Blue Jays and Mariners (and every other team in Major League Baseball) will wear these numbers the entire weekend.