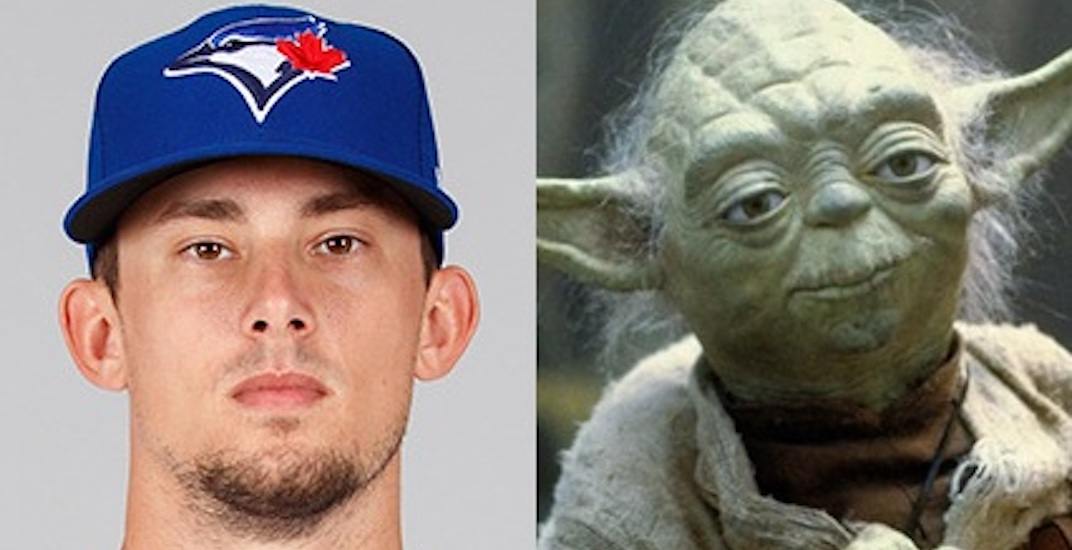 A long time ago in a ballpark not far away, the Toronto Blue Jays are preparing for their second annual Star Wars Night at Rogers Centre tonight.

The Blue Jays were a little late to jump on board the Star Wars promotion bandwagon (virtually every team in the majors and minors does one now), but the fan favourite promotion gets underway this evening at Rogers Centre.

If you think about it, the Jays draw some parallels to the rebel alliance; they’re under-manned at the moment, yet the franchise has some promising young stars who could champion this team and take down the evil empire (meaning the Yankees).

Just in case you’ve ever wondered who the Blue Jays’ twins would be in the Star Wars universe, wonder no more! 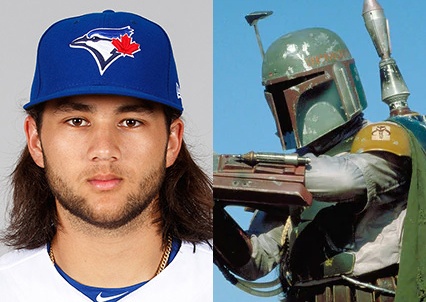 Never has there been such a perfect marriage between the Blue Jays and Star Wars than Bo Bichette and Boba Fett. It’s almost too good to be true, but the rookie shortstop’s name rhymes perfectly with one of the most notorious bounty hunters. 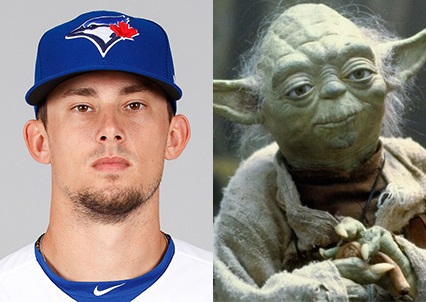 Cavan Biggio is only 24 years old, but the Blue Jays rookie is wise beyond his years. He has a Hall of Fame father and has apparently already taken a leadership role in Toronto’s clubhouse. Yoda would be proud: “Do or do not Cavan, there is no try.” 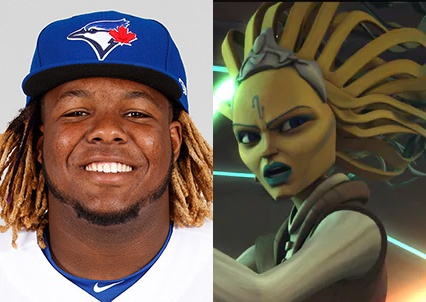 With his signature dreadlocks, Vladimir Guerrero Jr. can’t go anywhere in Toronto without getting recognized. Perhaps his hairdo is a salute to the Mikkians in the Star Wars universe, like the Jedi master Tiplar. 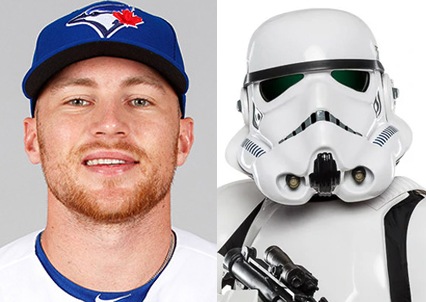 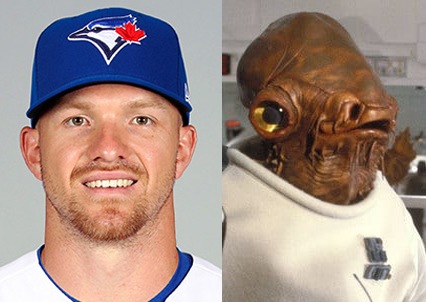 Admiral Ackbar is a member of the amphibious species, the Mon Calamari. And Derek Fisher’s last name is FISHer. The pun practically writes itself. 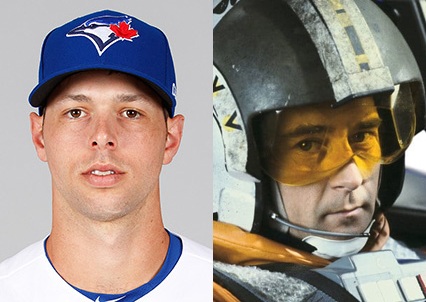 As one of the few members of the Blue Jays rosters who has witnessed both the 2018 and 2019 seasons, Sam Gaviglio’s been through some battles. So too has Wedge Antilles; the only rebel pilot who survived both Death Star attacks. 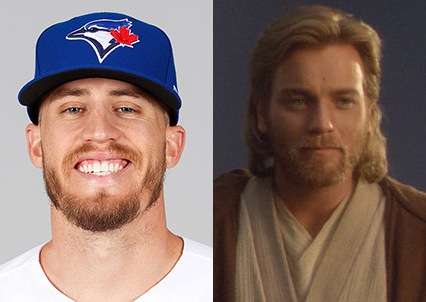 Ken Giles and young Obi-Wan Kenobi bear a resemblance here, although here’s hoping that Giles doesn’t spend the offseason in the sand dunes on Tattooine and goes off the grid decades. 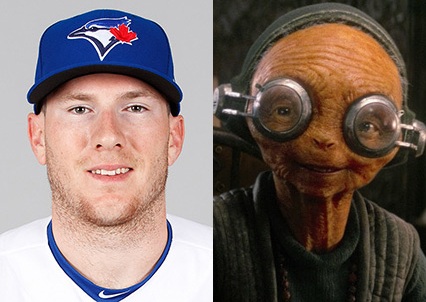 Danny Jansen can barely see a baseball without his prescribed glasses on the field. Lord knows how Maz Kanata would even get around without her signature Coke-bottle glasses. 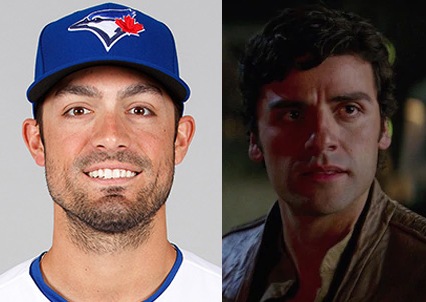 Randal Grichuk is an Adonis in his own right and Poe Dameron is one of the most rebellious rebels in the galaxy. The two practically look like brothers, right? 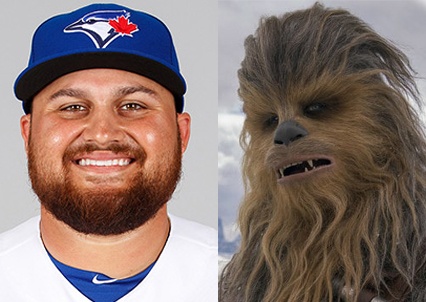 Rowdy isn’t his given name, but since it’s basically his first name, Rowdy Tellez bares a similarity with Chewbacca; they both have nicknames that would make awesome wrestler personas. 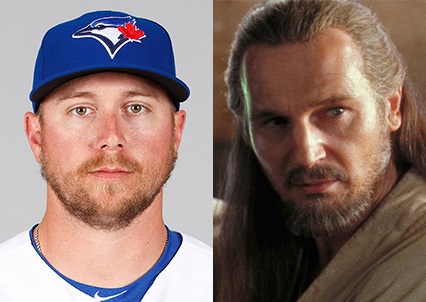 At only 32 years old, Justin Smoak is one of the elder statesman on the Blue Jays’ roster. Hanging out with 20 and 21-year-olds most days, the veteran first baseman has knowledge to bestow on his apprentices, much like Qui-Gon Jinn. You know, before he was impaled by a light saber. 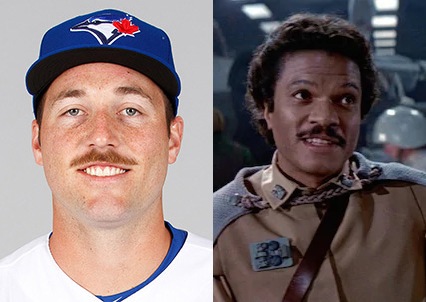 It’s all about the moustache. Sean-Reid Foley and Lando Calrissian are kindred spirits because of the lip sweater. 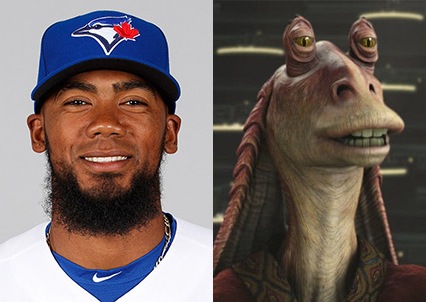 Even though the galaxy is melting down around him, Jar Jar Binks always knows how to add some levity to the moment. Similarly, Teoscar Hernandez is the life of the party in the Blue Jays dugout, sprinkling sunflower seeds on his teammates after home runs. 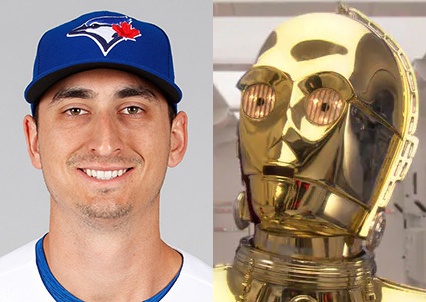 Jacob Waguespack is the tallest member of the Blue Jays’ 25-man roster and C-3P0 is a tall protocol droid … and that’s about all we’ve got for that one.