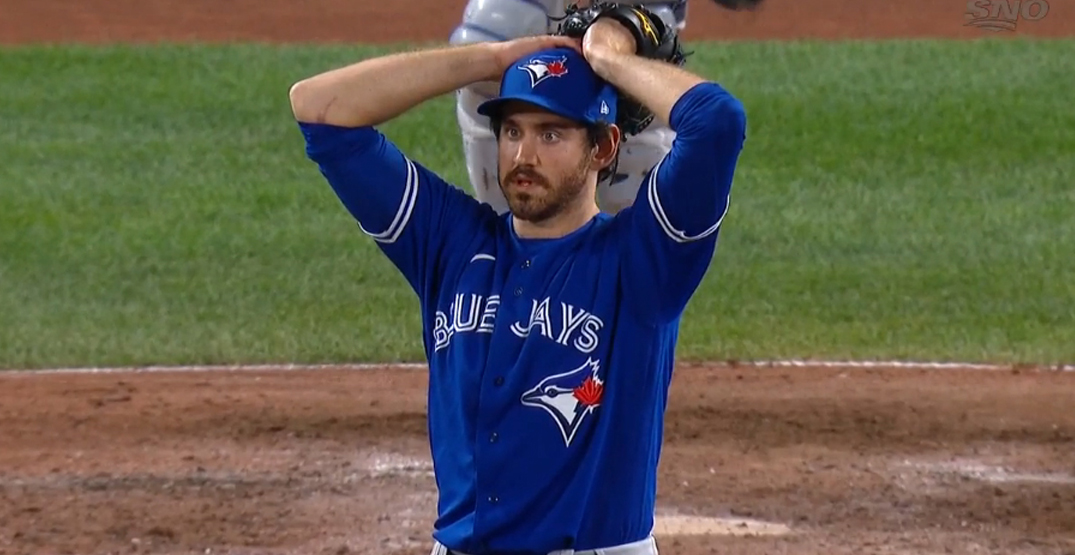 Call the Toronto Blue Jays “the comeback kids.” For the third time this season, their win expectancy was on life support with only a handful of outs to go, but they stormed back to pull off the unthinkable.

The Blue Jays managed not one, but two victories in their doubleheader against the Baltimore Orioles, but both were in oppositely dramatic fashion. For win one, it was an improbable five-run comeback after the O’s bounced Hyun-Jin Ryu in the third inning.

Then, for win two, the Keegan Akin of the Orioles was no-hitting the Blue Jays through six innings before Toronto stormed back for an 11 run explosion in the top of the seventh inning to secure their second victory of the day.

The Jays secured their 28th and 29th comeback victories in the span of six hours. Their division rival, the Tampa Bay Rays, lead all of MLB with 43 comeback wins this season.

In a word, it was a bonkers day for the Blue Jays. In the first game, they were down to a 1.9% win expectancy after the first out of the fifth inning. With seven outs left and down by five runs, the Jays miraculously closed the gap.

Who else other than “Mr. Clutch” George Springer to provide the go-ahead two-run home run for the Blue Jays in the top of the seventh inning. It’s the second time in the last month that Springer has come up clutch with a huge go-ahead home run.

When he came to the plate in the top of the seventh, the Orioles were one out away from winning, and the Blue Jays had a 7.8% win expectancy. And then this happened.

That was the most dramatic win for the Blue Jays on the day, but it might not have been the craziest. That insanity was reserved for the second game of the double dip, an eventual 11-2 victory. But the box score does not tell the entire story.

With three outs left, the Blue Jays had a 15.8% win expectancy, but Vladimir Guerrero Jr. slapped a single into right field and started a string of six consecutive hits for the away team.

Against Akin, the Blue Jays had zero hits through six innings and were trailing 1-0 to the Orioles. With their meat of their order due up in the top of the seventh, Toronto exploded for 11 runs on 11 hits in their final inning of the game.

The Blue Jays tied a franchise record with 11 runs in an inning, something they also did on:

Their 11 hits in the inning are also tied for a franchise record, with the 1984 inning above

For whatever reason, bizarre things usually take place during doubleheaders, but even this was a new level of wackiness for the Blue Jays. In both games, they combined to score 22 runs on 24 hits, which also included eight home runs.

In one game, the Blue Jays stormed back and won by the skin of their teeth. Then they were in danger of being left out of the hit column entirely, woke up in the seventh inning and said: “Let’s party.”

And with the pair of victories on Saturday, the Blue Jays briefly moved into the lead for the second Wild Card spot in the American League. After the Blue Jays, Red Sox and Yankees all lost on Friday, Toronto didn’t lose any ground against their rivals.

But these two W’s nudges them just ahead of the Yankees. 13-2 over their last 15 games, the Toronto Blue Jays are still the hottest team in baseball, and despite a loss on Friday night to the Orioles, the Jays picked up where they left off before arriving in Baltimore.