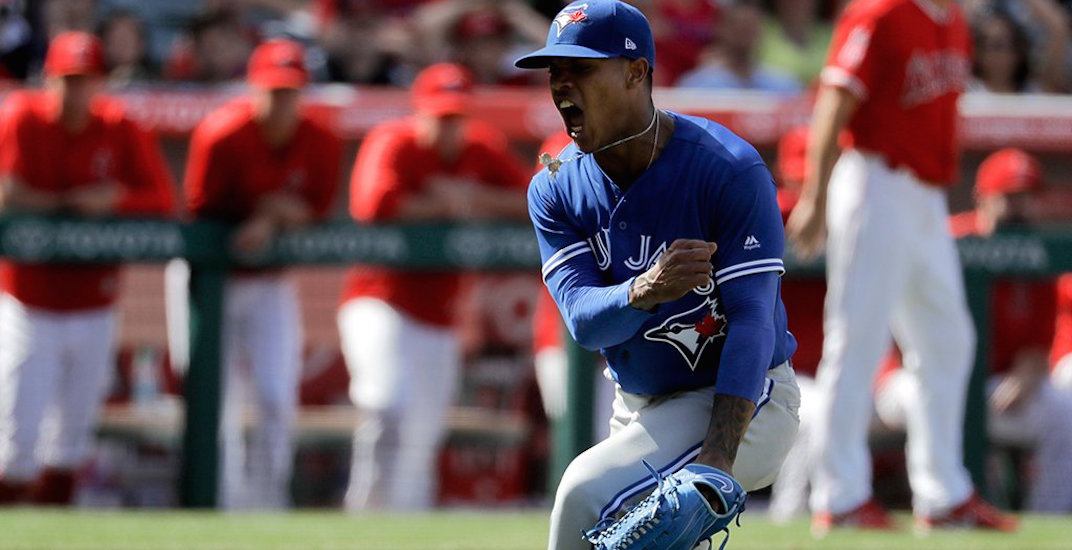 It’s turning into a banner year for one of the Toronto Blue Jays’ most promising young pitchers.

After starting the year by capturing a World Baseball Classic title – in which he was named MVP – Marcus Stroman is now top-five in ERA in the American League and enjoying one of the best seasons of his career.

He has become a household name.

On that same token, Stroman gained notoriety for his often exuberant displays on the field, which have irked competitors and in some cases, even umpires.

Benches cleared because Stroman struck out Anderson and he didn't like it pic.twitter.com/gg5Fcf1Hl7

Tuesday night’s incident between Stroman and Tim Anderson of the Chicago White Sox was the latest in a string of on-field altercations involving the Blue Jays’ starter.

As with most incidents on the baseball diamond, tensions rose between Stroman and Anderson after the 26-year-old pitcher struck him out. Anderson stared out to the mound as he walked back to the dugout, waiting for the Jays’ starter to look back so he could employ his own psychological warfare.

“It was one of those things I stepped out and he just complains and cries like he always does,” the White Sox infielder told reporters following the game. “That’s what it led to.”

The funny thing is, Stroman paid absolutely no attention to Anderson as he walked back to the dugout. Only upon turning around did Stroman realize Anderson had been staring him down the whole time, which led to the verbal jousting between the two and the benches clearing.

This altercation wasn’t all that dissimilar from what happened with Stroman last week and home plate umpire Will Little. After Stroman argued balls and strikes, Little wasted no time in ejecting Stroman, Russell Martin, and manager John Gibbons.

It all leads into this bigger semi-existential question about Stroman. Should he dial it back a little?

These aforementioned instances are only a few examples of when Stroman’s emotions have gotten him into trouble. If Tuesday night’s fracas between the Blue Jays and White Sox taught us anything, it’s that Stroman himself is becoming a lightning rod.

But like it or not, Stroman only has one setting: “himself”.

He admitted that to reporters last week following the run-in with the home plate umpire.

“I’m an emotional guy,” he said. “I’m going to continue to be myself regardless of who doesn’t like it.”

In a sport where fans are practically begging for players to show emotion, Stroman is the poster child. Those fans often want these guys to show emotion on the field and “look like they care.” Stroman does exactly that and yet from the other side, he’s criticized for being too emotive on the mound.

There isn’t any middle ground here; you either get a cold, calculated robot that comes to the ballpark, does their job and never smiles, or you get the player that rides the highs and lows just as closely as the fans who watch the games.

Stroman is the latter and that’s exactly why Blue Jays fans tend to gravitate towards him. He has an exuberant personality, but has the talent to back it up.

For whatever reason, opposing players (and even umpires) have taken exception to the way Stroman acts at the ballpark. They may be misconstruing it as Stroman trying to show them up, but in actuality, he’s just celebrating … mind you, it’s to the nth degree.

If Stroman’s guilty of anything, it’s the way he treated his post-game questions from reporters. He responded with short answers and resorted to the phrase Barry Bonds made famous: “next question”.

It boils down to this: you either get him or you don’t. You’re all-in with Stroman’s fist pumps, screams and huge verticals as he celebrates a strikeout, or it rubs you the wrong way.

Love him or not, Stroman is an incredibly talented pitcher and at the very least, the Stro Show always provides a great deal of entertainment.