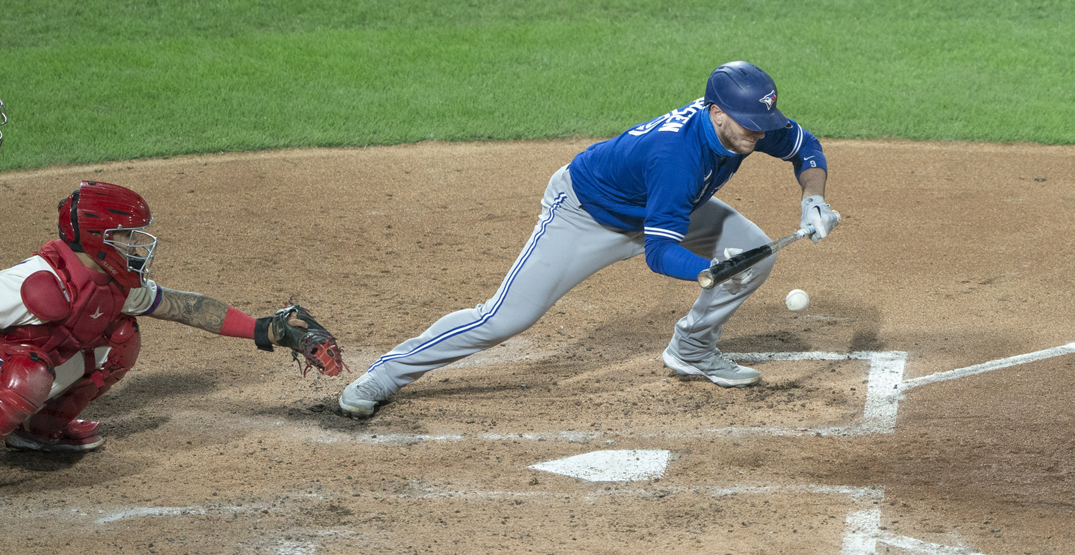 For the second time this season, Blue Jays manager Charlie Montoyo called for his hitter to bunt in extra innings with two strikes, and Santiago Espinal struck out on a bunt attempt into foul territory.

With runners on first and second base with nobody out in the bottom of the 11th inning, the Blue Jays squandered a golden opportunity to put the Tampa Bay Rays away in the series opener. Instead, they lost 9-7 in 12 innings.

It might seem odd to nitpick on one particular play from that game, but that 11th inning at bat with Espinal at the plate is where things fell apart for the Blue Jays.

Montoyo put on the bunt for Espinal (which he is known to do), but the problem is everybody in the ballpark knows that once the Blue Jays manager puts on the bunt sign, his hitters have every chance to lay the bunt down, including with two strikes.

Here’s where the Rays were positioned on Espinal’s at bat; with first baseman Ji-man Choi about 35 to 40 feet from first base with holes all over the infield for Espinal to spray the ball.

Even if the Blue Jays third baseman were to lay down the bunt to third base successfully, Yandy Diaz was there to intercept the ball and fire to first base, anyway. So any strategic advantage in that situation was null and void.

And to take that hypothetical one step further, if Espinal successfully advances the runners with a sacrifice bunt, that brings the Blue Jays backup catcher and number eight hitter Reese McGuire to the plate to play hero.

It would be one thing if this was an isolated incident with Montoyo, but this happened earlier this season on April 1 when Danny Jansen struck out in extra innings while trying to lay down a bunt.

He made three unsuccessful attempts and struck out, and despite Jansen’s feeble attempt at plating a run, the Blue Jays won anyway over the Yankees, 3-2.

This might be a weird anomaly, but there have been four sacrifice bunt attempts with two strikes in extra innings this season. Guess which team has two of them?

This time around, the Jays weren’t so lucky as the Rays stormed back the following inning courtesy of a go-ahead grand slam by Rays catcher Francisco Mejia. By that point, the Blue Jays had used up all good will they earned with the baseball gods, it seems.

In the top of the 11th inning, the Blue Jays escaped a huge jam when reliever worked his way out of a bases loaded jam and fought all the way back from a 3-0 count to Brett Phillips to deliver this pitch for a called strike three.

The Blue Jays intentionally walk the bases loaded, Payamps goes to a 3-0 count, then strikes out Phillips on this 3-2 slider. pic.twitter.com/410RgQ7864

When asked in his post-game press conference about the potential of taking off the bunt call in the 11th inning, Montoyo rationalized his decision to ask Espinal to bunt, no matter the count: “He’s got to get the bunt down. Just bunt it to third; we only needed one run.”

A sacrifice bunt is a baseball fundamental which managers should trust their position players to lay down at any given moment. But with the game on the line in extra innings two two strikes against a hitter, doesn’t it make sense to let the hitter try to put the ball in play?

Especially for a hitter like Espinal who can get the bat on the ball. His .303 BABIP ranks seventh on the team among Blue Jays with 30 or more plate appearances this season.

Advancing the runner at second base an extra ninety feet in extra innings is paramount for the team at the plate, but should it come at the expense of someone at the plate winning the game with one swing of the bat?

If ever there was a time to call for a sacrifice bunt, it would be in extra innings with nobody out and the go-ahead run at second base. But the calculus suddenly changes when the batter goes to two strikes. That doesn’t seem to faze Montoyo, who left the bunt sign 0n anyway and Espinal struck out on his third bunt attempt.

I’m not against the sacrifice bunt play as a concept (it always has its time and place), but unless you are confident your hitter can lay one down with 100% certainty, a bunt attempt in a two strike count is always ill-advised.

Sure, it’s only one game of 162. But it was a squandered opportunity by the Blue Jays – and there were many junctures in that game when they could have overcome their shortcomings and won.

But when the manager doesn’t put the team in the best position to win like Montoyo did in the 11th inning, it’s an uphill battle to claw back and win the game.