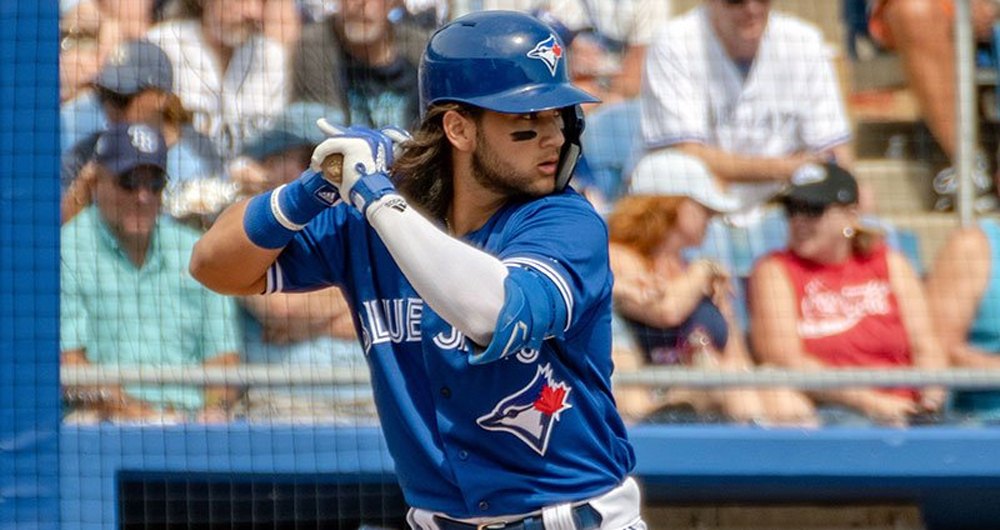 2019 was supposed to be the “spring of Vladdy”, (you know, like the “Summer of George”). After a mass exodus of the Blue Jays’ veteran players, eyes shifted towards the team’s up-and-coming third baseman, Vladimir Guerrero Jr.

He came exactly as advertised through the first few weeks of spring training. He displayed his tremendous power — hitting a double to the left field wall — one-handed, mind you. However, after the Blue Jays announced Guerrero Jr. suffered an oblique strain, the “Vladdy Show” is on hold for at least three weeks.

While most of the attention has fallen squarely on Guerrero, the emergence of Bo Bichette is the second most fascinating storyline to watch surrounding the Blue Jays this spring. Much like Guerrero, he was a non-roster invitee, meaning he’s receiving ample playing time with the big club.

So far, he’s started nine games at shortstop through the Grapefruit League schedule for the Blue Jays. Judging by his numbers, Bichette looks every bit ready to play with his MLB brethren. “I feel ready. I feel ready to play in the big leagues”, Bichette told MiLB.com.

Prior to his injury, Guerrero’s timeline was on the horizon. Barring an injury, he would join the Blue Jays 25-man roster at some point in 2019. In the case of Bichette, his timeline to the big leagues isn’t quite as concrete. He posted impressive numbers in his sophomore season in the minors, but a realistic call-up date for Bichette might not happen until late 2019 or early 2020.

That hasn’t stopped the 20-year-old shortstop from raking. Hitting tape measure shots like this one from last week, Bichette displayed his pure hitting ability by pulling an inside slider for a home run. It’s a tremendous piece of hitting for a young player wise beyond his years.

Along with arguably the best hair in minor league camp, Bichette possesses all the skills a baseball organization could ever want; the ability to play a premium position, and he hits for power and average (Bichette won a minor league batting title during his rookie campaign in 2017).

Realistically, Bichette will get optioned to the minor leagues to start the 2019 campaign and plays at triple-A with the Buffalo Bisons. Bichette would graduate one level from last year, where he played the bulk of his 2018 season hitting .286/.343/.453 in double-A for the New Hampshire Fisher Cats.

Most people marvel at Guerrero’s pure hitting ability. In fact, he might have the best bat of any Blue Jays player at any level, both major and minor leagues. The 19-year-old forecasts to be a generational talent at the plate. According to FanGraphs 2019 projections, Guerrero is projected to be the 14th best position player in MLB this season.

But as the focus shifts away from Guerrero Jr., fans should keep their eyes glued to Bichette in minor league camp. Of the two young phenoms, he’s the better all-around player and can make an impact on both sides of the ball. That’s not to say Guerrero isn’t a defensive wizard, but his calling card has always been his bat. Bichette is the complete package.

If anything, it will be fascinating to watch the progression of both Bichette and Guerrero over the course of the next few seasons as they settle in as big leaguers. They’ve grown up together these last few years as they’ve progressed together through the ranks of the Blue Jays organization.

They played together with the Bluefield Blue Jays in 2016, with the Dunedin Blue Jays and Lansing Lugnuts in 2017 and the New Hampshire Fisher Cats in 2018.

In order for the Blue Jays to claw their way back into contention, without question, it has to be on the back of Bichette and Guerrero.

Within the next few years, if Guerrero develops into anything less than a perennial All-Star, it will feel like a disappointment. The Blue Jays have never had this much hype surrounding any one prospect. In fact, Guerrero is one of the most hyped baseball prospects, period, in recent memory.

Bichette, on the other hand, is flying under the radar as one of the Blue Jays’ most interesting prospects to watch in 2019. Bichette may not hit one-handed doubles to the wall, a la Guerrero, but onlookers will be mesmerized by the play of the Blue Jays’ next star shortstop … simply known as “Bo”.