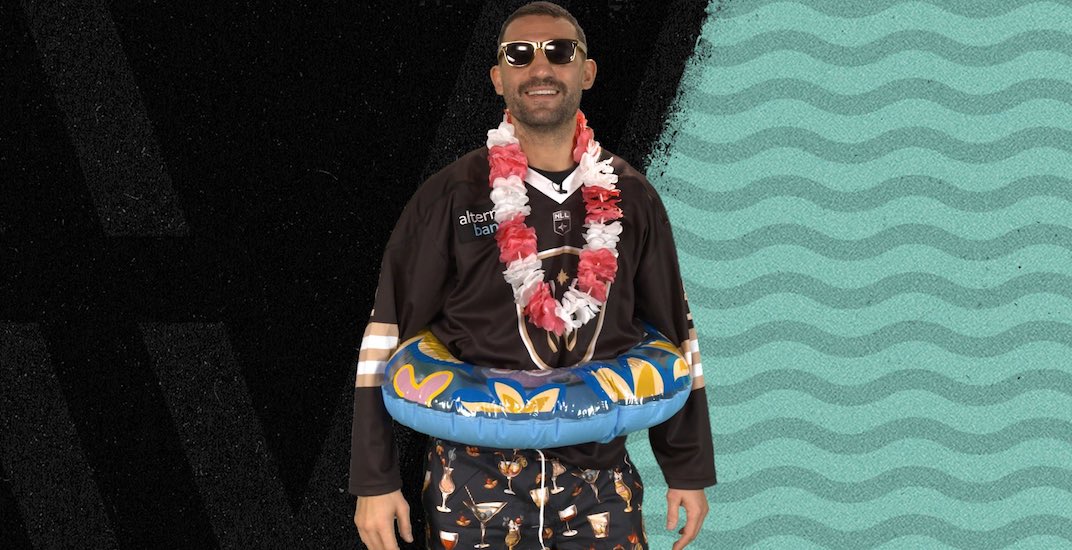 It may be snowing outside, but there’s a beach party happening in Vancouver this week.

The Vancouver Warriors return to the turf inside Rogers Arena Friday night, as they host the Colorado Mammoth. Among those in attendance will be Paul Bissonnette, the popular former NHL enforcer known as “BizNasty” to his 1.1 million followers on Twitter.

$500 on the board for a victory on Hawaii night. Tell the boys I got the Roxy tab Saturday night too. Come get weird with us Friday night Vancouver. @nllwarriors @NLL @LoganSchuss18 https://t.co/1N549sKTqA

It’s “Beach Party” night, with the team encouraging fans to wear Hawaiian shirts and flip-flops. As part of the promotion, the Warriors will be giving away 2,000 leis as well as one trip to Mexico. They’re also going to be serving $5 Coronas during happy hour.

Or, as Biz explains:

BizNasty is acting as the Warriors “Team Ambassador” this season. He’s also going to be hosting a halftime limbo contest, which is one of many beach-themed in-game activities planned.

The Warriors are offering fans a chance to party with BizNasty in a couple of ways.

First, there’s a contest to win a suite for the game. The suite holds up to 20 people, plus Biznasty, who will party with the group for one quarter. The contest runs until Thursday at 6 pm:

Enter to win a suite for Friday’s #VancouverWarriors game and hang out with @BizNasty2point0 for a quarter!

You can guarantee your chance to party with Biz with a “BizNasty ticket” (yes, that’s what they’re calling it). A BizNasty ticket includes your seat for the game as well as access to the after party, for $19.95 (promo code: Biz20).

You must be 19 or older to attend the after party, which will feature Bissonnette, the Bud Girls, and the Warriors Dance Team.

It is time once again to swipe up #BIZ20 promo code on some #VancouverWarriors tickets! 🎟

Join the post-game party with @BizNasty2Point0 this Friday at @RogersArena! Get your ticket + party access for just $19.95.