After more than half a century of operating as a public house, the Biltmore Cabaret was re-launched in 2007 with an emphasis upon hosting both Canadian and international musical artists, as well as being a stomping ground for Vancouver’s thriving local music scene.

The popular East Vancouver venue now turns eight years old on May 11 and is ringing in the occasion in only the most appropriate of fashions — with a live show. 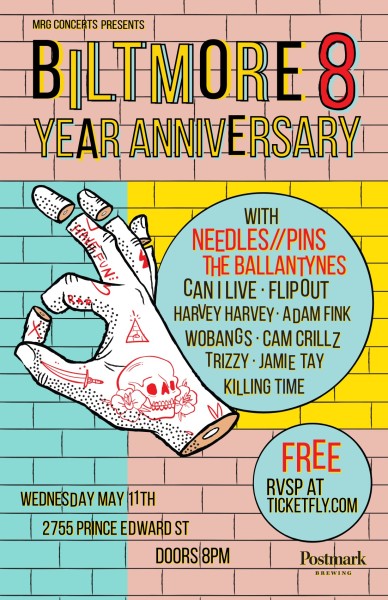 Two local bands, punks NEEDLES//PINS and R&B-garage group The Ballantynes, are set to take the Biltmore Cabaret’s stage, as will a large handful of DJs, including DJ Flipout, Adam Fink, and Wobangs, who’ll keep the party going well into the night.

Craft beers from local small-batch makers Postmark Brewing will be flowing, alongside the regular beverage offerings.

Admittance is free before 10 p.m. with an RSVP.