Shortly after November’s municipal election, we wrote about how Vancouver voters rewarded the “Vision and Courage” shaping our city’s emerging bike culture, and how investment in a AAA-rated (all ages and abilities) network of bike infrastructure has substantially changed the number and demographic of people cycling for transportation since Mayor Gregor Robertson’s election in late 2008.

With the start of a new year, and a new political mandate, we wanted to take an opportunity to state – for the record – what we feel are the crucial projects needed to build on that momentum, and expand our network for ages 8 to 80, encouraging more and more Vancouverites to consider the healthier, happier, simpler act of getting on a bicycle, as one of the many different ways they move around their city.

A Commercial Drive for everyone 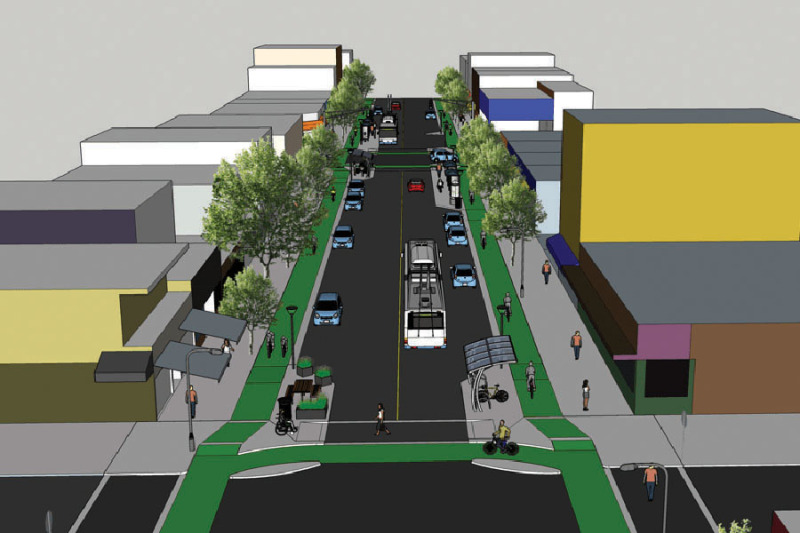 There is no doubt in our minds that Commercial Drive represents the next bold step in firmly establishing the bicycle as a reliable, everyday mode of transportation in Vancouver. In a neighbourhood with the highest rates of walking and cycling in the city, a community group named Streets for Everyone has stepped forward with a proposal for widened sidewalks, increased public seating; bigger, better bus stops; one-way, grade-separated cycle tracks; and Dutch-style, protected intersections.

As we have written in the past, the Drive represents a tipping point for this city’s ambitions of world-class liveability, sustainability, resiliency and accessibility. While we have a quite functional bike network, it is still mostly designed for recreation and longer, single-purpose trips (such as cycling to work). The many other multi-purpose trips one makes in a day (shopping, dining, banking) become incredibly problematic — especially with children. This is a rare opportunity to create a street that works for all of its users; a destination Vancouverites will go out of their way to spend time shopping, dining and socializing. People of all ages and backgrounds will be able to live, work, and play on the Drive, regardless of how they get from A to B. 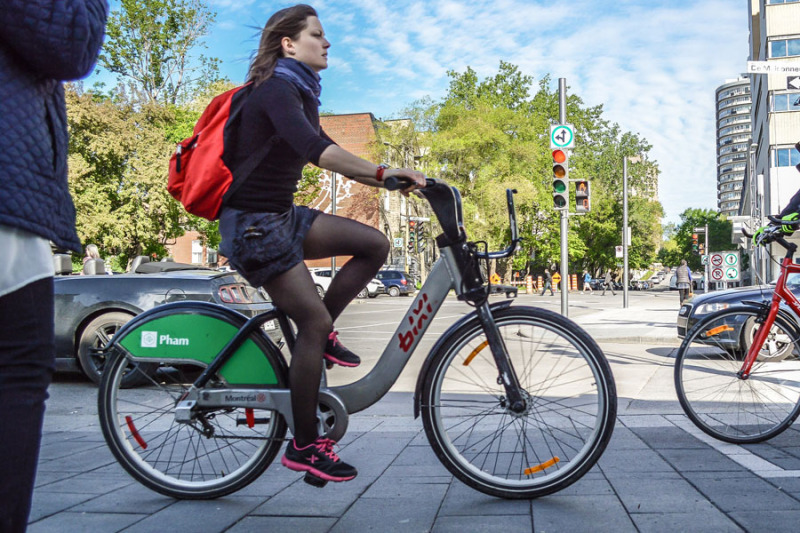 There are now 780 bikeshare schemes around the world, functioning as low-cost, high-return extensions of the public transit system, and providing a “last mile” solution for just pennies a day. Only three of these systems (Melbourne, Brisbane, and Seattle) operate under an all-ages helmet law, averaging 0.3 to 1.1 trips per bike per day (versus 6 to 8 in helmet-optional cities such as Paris and New York). These schemes have also proven to be remarkably safe, having delivered over 23 million (helmet-optional) trips across the U.S. over seven years without a single fatality.

Rather than follow the lead of Dallas, Mexico City and others that revised their helmet law, Vancouver stubbornly appears set to launch just the fourth helmet-mandatory bikeshare in the world, without once appealing to Attorney General Suzanne Anton for a revision or exemption. Not only can we expect supressed ridership, but also vastly inflated start-up and on-going maintenance costs, in order to provide (untested) automated helmet disposal machines. We believe this to be a terrible mistake; one easily rectified with the stroke of a pen, allowing bikeshare to flourish as an indispensible characteristic of a healthy, vibrant, and liveable city. 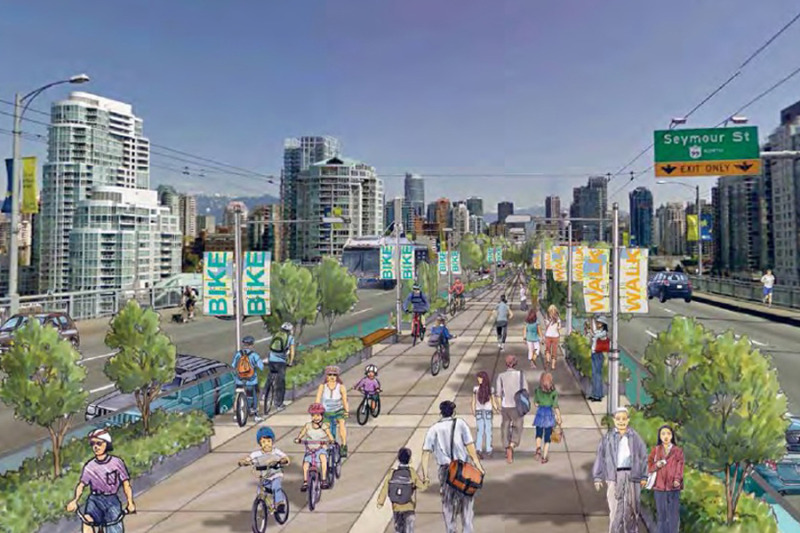 One only needs to look at the map of bike routes in Vancouver to notice the sizeable gap across the middle of False Creek, in between the Burrard and Cambie crossings. The eight-lane Granville Bridge was vastly overbuilt when first constructed in 1954, and is still seldom subject to congestion, yet remains downright hostile to anyone on foot or bike. As a result, the city’s own proposal for a two-lane raised greenway down the centre of the bridge makes perfect sense. Maintenance upgrades are scheduled in the coming years, and a brave, permanent upgrade to the bridge deck would be a most welcome addition to our growing walking and cycling networks. 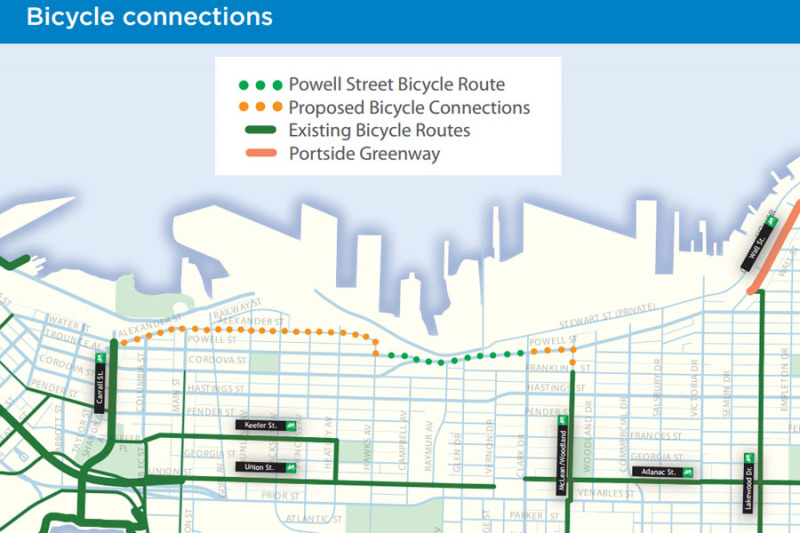 Gastown (including Railtown) is quickly becoming the high-tech employment centre of this city, yet, strangely, continues to be incredibly difficult to access comfortably by bicycle. The short-but-sweet Carrall Street Greenway accesses the area from the south, but there isn’t a single east-west connector route, barring a disjointed, five-block protected bike lane completed as part of the Powell Street Overpass project late last year. Extending that AAA-route along Powell, onto Alexander Street, and eventually, along the length of Water Street (also due for maintenance upgrades in the coming years), would be an excellent way to attract high-tech talent, businesses, and retail activity to Gastown, in an increasingly competitive global marketplace. 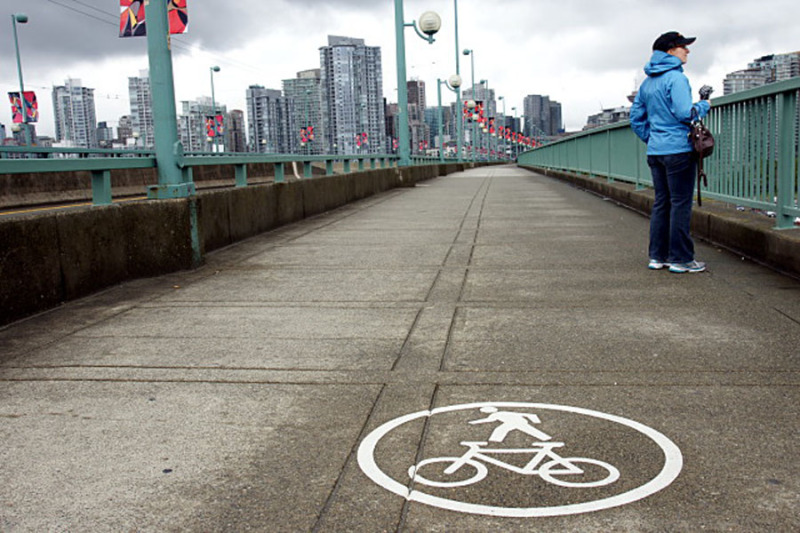 If you’ve walked or cycled across the Cambie Bridge in recent years, you’ll understand that having cyclists and pedestrians share the same, five-metre wide space on the east side of the bridge deck is no longer an option. It is far too crowded, particularly during rush hour in the busy summer months. Much like they did with the Burrard Bridge back in 2009, city staff must look at reallocating one of the six vehicle lanes into a pair of physically separated bike lanes, improving safety for everyone, particularly those on foot. These facilities would also seamlessly connect the bridge to the Off-Broadway and Seaside Bikeways on the south side, as well as recent work completed on the north side to connect it to the Beatty Street Bikeway. 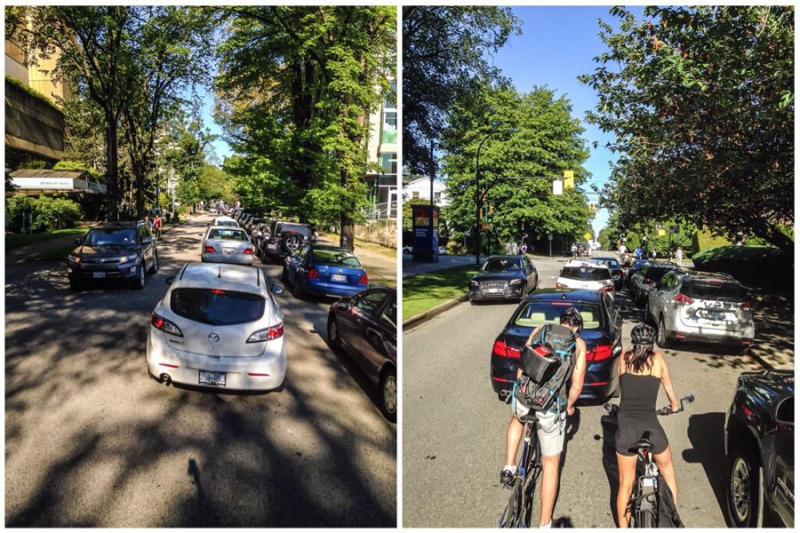 Stretching over 11 kilometres from the Central Valley Greenway in East Vancouver to the UBC Endowment lands, 10th Avenue is one of this city’s longest, oldest and busiest bikeways. It is a route our own family rides every single day, but – in all honesty – is far from being accessible to all ages and abilities. Frustratingly, the city still permits on-street parking on both sides along most of the route, with far too many cars rat-running between Broadway and 12th Avenue; creating narrow, unsafe conditions where impatient drivers attempt to bully cyclists to the side of the road. 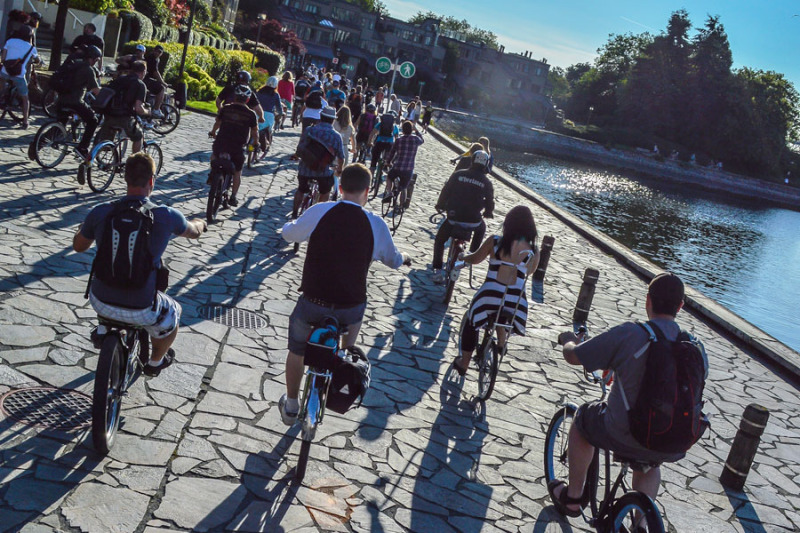 In a sense, the seawall on the south side of False Creek – between the Olympic Village and the new Point Grey Greenway – has been a victim of its own success. There are several areas where cyclists and pedestrians share the same space (such as through Charleson Park), most of which have become incredibly congested and unsafe, especially on sunny weekend afternoons. We would also love to have a frank talk with the Architect who thought flagstone was a good surface on which to cycle.

However, these spot improvements fall under the jurisdiction of the NPA-controlled Park Board, who vehemently opposed Vision’s abandoned proposal to separate walking and cycling on the hectic, hazardous Kitsilano Beach. It is an area where the NPA can show leadership, demonstrating they are a progressive, 21st century party open to compromise and change. But whether they will do that remains to be seen. 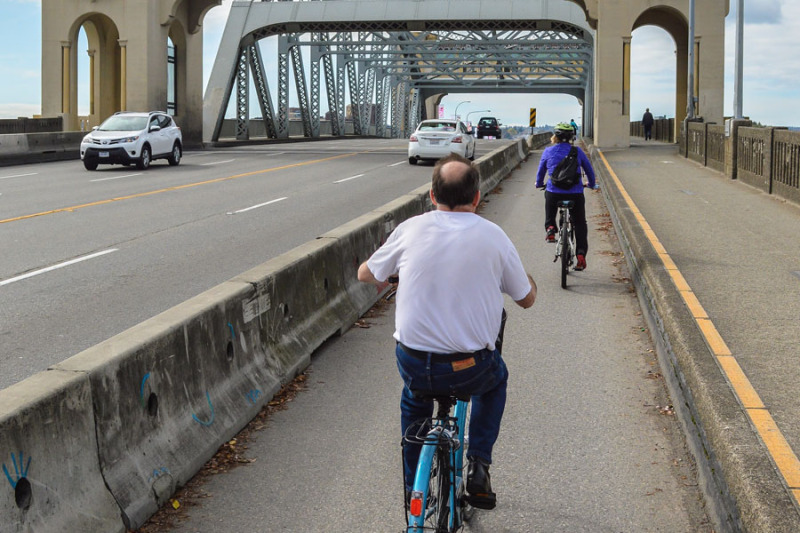 The Burrard Bridge was the first protected bike lane Gregor Robertson built during his first term as Mayor, and the numbers indicate it has been a tremendous success, but it was always designed as a temporary, trial facility. While having a pair of one-way cycle tracks on either side of the bridge deck is ideal, having walking prohibited on the east side is far from it. With seismic upgrades scheduled in the coming years, it is finally time to make these changes permanent, and ideal for both walking and cycling. The intersection on the north side at Burrard and Pacific is also long due for an overhaul, which is statistically one of the most dangerous junctions in the city. 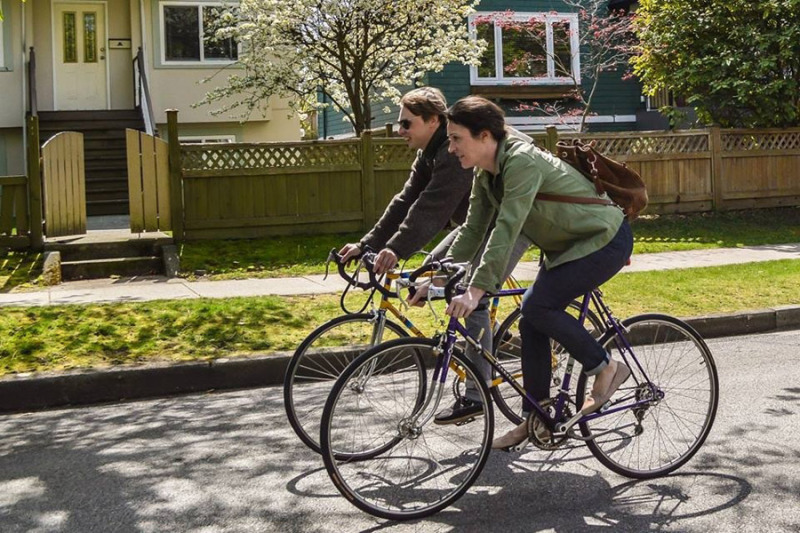 Another bikeway worthy of a (relatively) quick and easy upgrade is on Ontario Street, particular the short, uphill run from the Olympic Village to the 10th Avenue Bikeway. The Olympic Village has quickly become ground zero for Vancouver’s emerging bike culture, and a low-stress connection to the east-west route is much needed. Much like 10th Avenue, a AAA upgrade would include parking restrictions, traffic calming, intersection redesign, and physical separation (where it is needed). 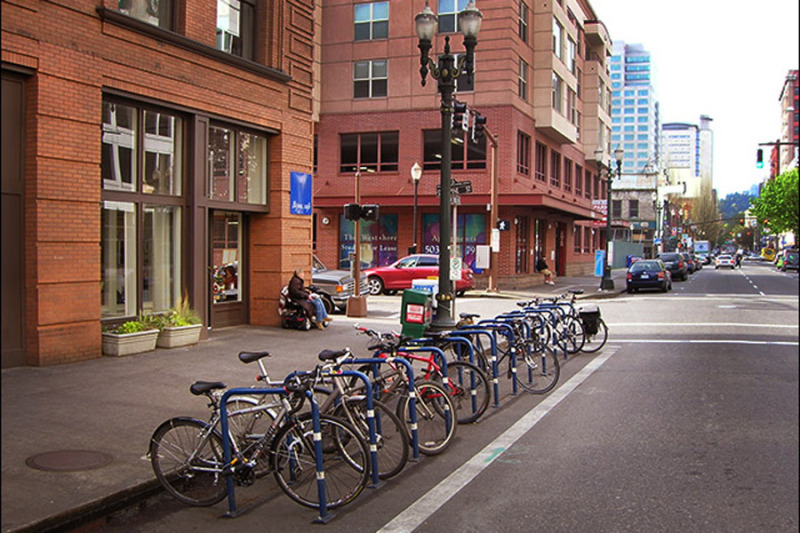 Last but not least, our tenth wish for 2015 is that city staff will begin to address the growing bike parking problem that an increase in ridership has created. Demand for secure, convenient places to lock one’s bike is far outpacing supply, with very real repercussions on where and when people will stop and spend their money. It is not uncommon to stop outside a brewery, restaurant or café in the summer, and see bikes locked to fences, trees, signposts, and parking meters. Consider cities such as Portland, whose much-lauded bicycle parking corral program converted 120 on-street car parking spaces into room for over 2,400 bikes (followed by a predictable increase in economic activity at those locations, and a city-wide, two-year waitlist).

These 10 items are by no means a definitive or official list, but are designed as a conversation starter. Have any suggestions? Leave them in the comments section.

Chris and Melissa Bruntlett are the co-founders of Modacity, a multi-service consultancy focused on inspiring healthier, happier, simpler forms of urban mobility through words, photography and film. You can find them on Twitter: @modacitylife