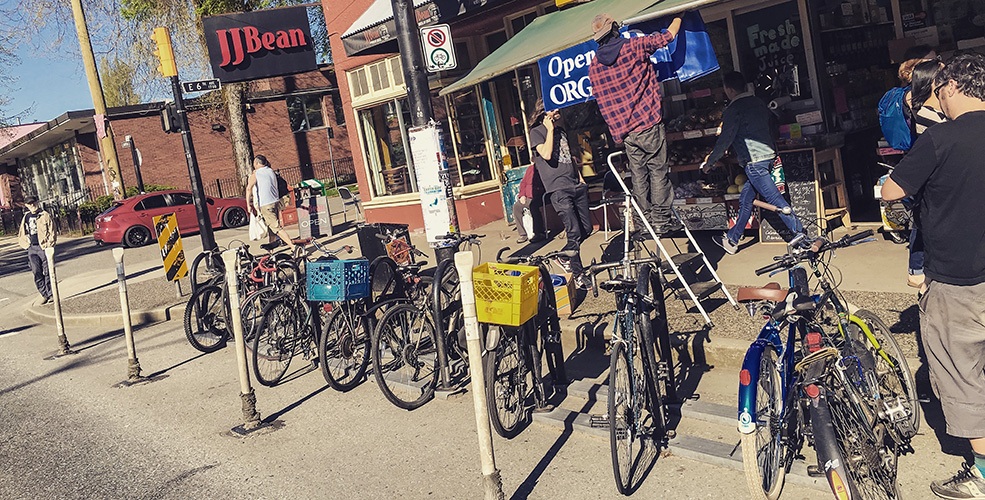 On Saturday, August 13 2016, HUB Cycling launched its inaugural Bike To Shop Day – an event focused on showing how riding a bicycle doesn’t have to be just for recreation or commuting.

Teaming up with 33 local retailers, they offered a Bike to Shop Passport to the 965 people who registered, which featured discounts on various products and services, plus entries for prizes, including the grand prize of a weekend getaway to Kelowna.

A cargo load of thanks to all the incredible volunteers who were part of #biketoshop – we couldn't do it without you pic.twitter.com/IILciy4mmZ

Similar to their bi-annual Bike to Work Week event, HUB set up celebration stations near popular shopping destinations throughout Vancouver, as well as one at Park Royal in West Vancouver, where volunteers and supporting groups provided free refreshments, maps, passports, and quick bike repairs for an estimated 1,500 people.

With the help of sunny and warm weather, the day successfully helped prove that making shopping trips by bike can be enjoyable, easy, and incredibly convenient.

At Modacity, we’ve long recognized the simplicity of shopping by bike. In March 2015, we wrote about how, for Vancouver to achieve its full potential as a cycling city, more attention needs to be paid to facilitating those quick trips to the store:

Consider this simple fact: The average North American work commute is ten miles (16 km) in one direction, while the average shopping/errand trip is just two miles (3 km). If we are truly striving for mass uptake and increased mode share, the conversation around cycling needs to move away from facilitating the daily commute of individuals, and towards the everyday transportation needs of entire families. Lucky for us, the latter just happens to be the lowest hanging fruit. HUB’s biannual Bike to Work Week undeniably serves a purpose, but are we better off encouraging citizens and local businesses to participate in a Bike to Shop Day?

That was fun, I rode out to to the Drive and #Bosafoods and bought some special #OliveOil #biketoshop #bikeyvr pic.twitter.com/1xMT2EY8CW

Which is why we were excited to participate in Vancouver’s first ever Bike to Shop Day, and help promote the benefits shopping by bike offers not just riders, but local businesses as well.

Our day included a visit to the Trout Lake Farmers Market, followed by some shopping on Main Street using the adjacent Ontario Street Bikeway. While we’ll happily admit it would have been preferable to be able to ride comfortably on Main Street with our 10-year-old daughter – an act the current painted sharrows fail to facilitate – we were happy to spend our money at local businesses that valued us arriving by bicycle.

Too often, when looking at things like mode share, the focus is placed on the commute to and from work or school. We’ve often argued that for a broader uptake of cycling, policy makers and planners should look at the low hanging fruit – the trips to the store that are three kilometres or less and require less effort and are therefore more accessible.

Back from #biketoshop, with bagels and yummy sandwich on a fab summer day. #bikeyvr. pic.twitter.com/HY11c18IZE

Now that Vancouver has successfully reached a 10% cycling rate for trips to work, we should start putting energy and effort into these shorter trips. Not only would it help to increase the number of people who opt to ride their bike rather than drive, but it would also direct spending to local retailers along neighbourhood high streets.

For our part, we spent nearly $400 in local shops on Bike To Shop Day, which included groceries for the week and Vancouver-made products. Imagine if more households in the city were able to spend their money close to home, all because they could arrive safely and easily by bicycle. Not only would it support the viability of Vancouver-based small businesses, but that money would be invested back into our local economy.

Business improvement associations, like those in Downtown Vancouver (DVBIA), Hastings Crossing, and Gastown, are realizing the spending power of those arriving in ways other than a private automobile. To their credit, the DVBIA has done an incredible about-face in the last year, acknowledging that the bike lanes they once fought against are now proving to be an asset in bringing more people to the area to shop. They actively support the City’s newest additions to the downtown separated cycle track network, as well as our newly launched bike share system.

Bike to market today & be entered into a prize draw! Cyclists save the $2 market money fee today too.#biketoshop pic.twitter.com/Tv9mBBrpVK

While just a one-day event, Bike To Shop Day celebrated how simple and easy shopping by bicycle can be, and the positive impact it can have on a given neighbourhood and our city. With continued support by HUB, our politicians, Business Improvement Associations, and local businesses, hopefully the idea of a dedicated bicycle shopping day can spread to a Bike To Shop Week, Month and – eventually – just business as usual in Vancouver.