Much has been written and studied about the financial return when cities invest in safe, separated bicycle infrastructure. It is estimated, for example, that for every kilometre one of its citizens cycles, our society earns 18 cents in increased public health, air and sound quality, and decreased collisions, congestion, and road maintenance. Inversely, every kilometre travelled inside an automobile costs our society 17 cents, for the exact opposite reasons. There is, however, one additional benefactor we seldom discuss when debating better bike lanes, and that is the city’s bustling tourism industry.

Vancouver has long been a two-wheeled tourism destination, with the Stanley Park seawall loop high on most visitors’ “To Do” list since the stretch between Second and Third Beach was completed in 1980. This has resulted in a cluster of bike rental shops situated in the West End, and a very congested waterfront route around the perimeter of the city, but precious few businesses have profited from this phenomenon. That dynamic has begun to change in recent years, with protected bike lanes popping up across the downtown peninsula, and even reaching out into Kitsilano, Strathcona, and other outlying areas.

“Distributing tourists and their spending around the city” 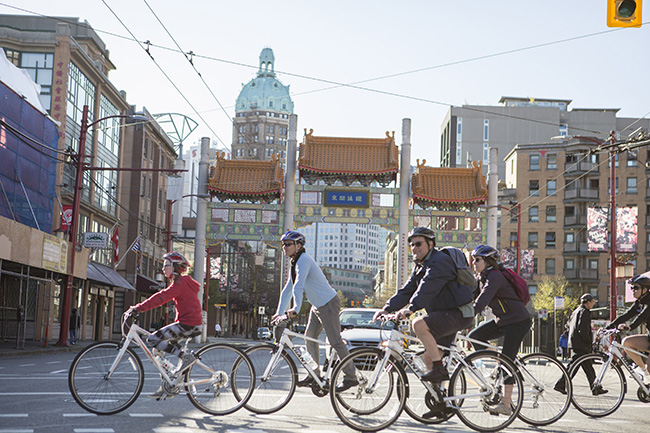 The trend of more and more tourists venturing outside the downtown peninsula by bike is something that hasn’t gone unnoticed by Amber Sessions, Communications Manager for Tourism Vancouver. “With the advent of the new separated bike lanes, tourists have more confidence to cycle downtown and around Vancouver’s various neighbourhoods,” she explains. “This is definitely a good thing, as it frees up space on busy bike routes such as the seawall. It also gets visitors to explore different neighbourhoods, thereby helping to better distribute tourists and their spending around the city.”

Within the larger picture, Amber sees urban cycling fitting in perfectly with the growth of “soft adventure” tourism (low risk activities that require little to no skill or experience, such as snorkelling, fishing, skiing, camping, snowshoeing, or horseback riding). And it’s one area of interest in which Tourism Vancouver is keen to take advantage. Sessions notes: “We have long marketed cycling as one of the top Vancouver experiences. You’ll notice images of bicycles in almost all of our marketing collateral.” And – not coincidentally – you’ll notice bicycles in a growing number of Vancouver hotels.

“You simply cannot buy that kind of quality advertising” 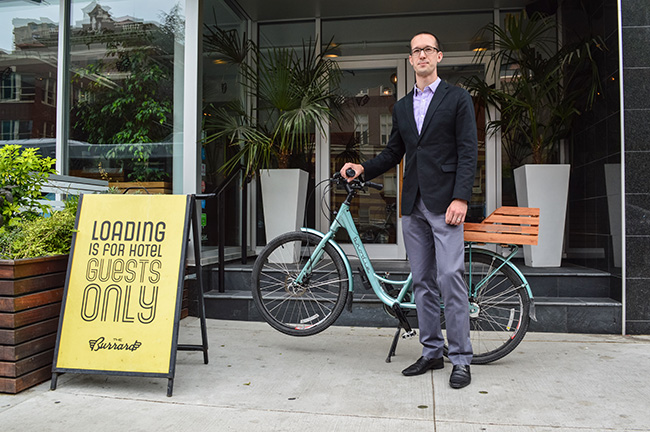 One of the first facilities to address this demand was The Burrard, a 72-room boutique hotel located a block from where the Hornby Street protected bike lane intersects with the Comox-Helmcken Greenway. “We renovated and reopened in 2011 with a fleet of eight Electra Cruisers,” recalls General Manager Darren Simpson. They have since doubled their fleet to offer 16 Brodie Pax, which their guests are free to borrow without any time limitations. As Simpson notes: “More than half of our visitors note the bikes as a ‘valuable amenity’ when completing their post-stay survey, so they have certainly provided us with a worthwhile return on investment.” 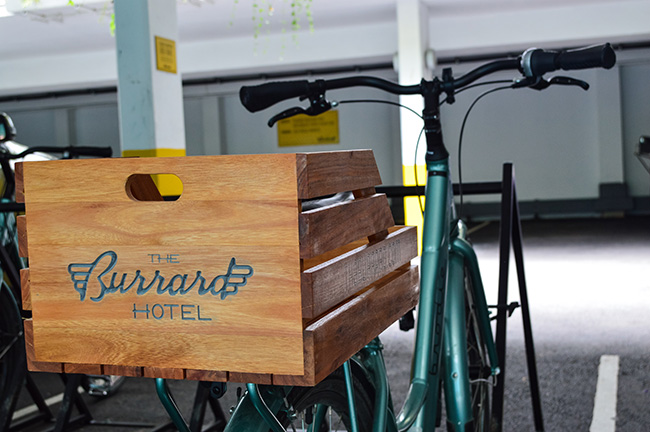 But this fleet of bicycles has benefited their business in more ways than just the bottom line. “Most surprisingly, it has allowed our staff – many of whom bike to work themselves – to share their passion, joy, and knowledge with the guests,” says Darren glowingly. Then there’s the intangible aspect of branding, which can now be frequently spotted around Vancouver on the fleet’s bike baskets (author’s note: I only became aware of the Burrard after spotting their logo repeatedly on my travels around the city’s bikeways). “You simply cannot buy that kind of quality advertising,” admits Simpson.

A unique response to guest demand: The “Bike Butler” 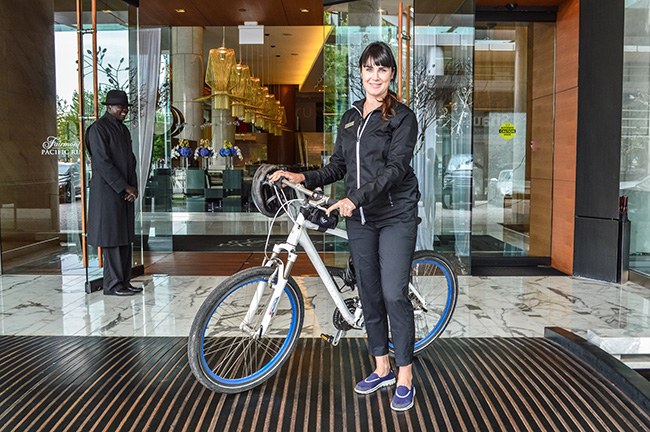 If there’s one hotel that has taken the concept of rental bikes as a guest amenity to the next level, it’s clearly the Fairmont Pacific Rim, the 377-room luxury hotel at the foot of the Hornby Street protected bike lane. “Fairmont has always been known for its innovative guest service programs,” notes Public Relations Manager Kaylyn Storey. “Many of our other hotels offer themed ‘Butlers’, unique to their specific locations, such as the ‘Fish Valet’ at the Fairmont Vancouver Airport. This seasonal position caters to guests returning with their catch from west coast fishing lodges, who is responsible for wrapping and storing the fish in the hotel’s exclusive freezer, and then delivering it to the gate prior to take-off.”

After opening for the 2010 Olympics, staff in their downtown Vancouver location quickly noticed most guest requests were centered on cycling, so in 2013, they introduced the concept of the “Bike Butler”. This full-time employee is responsible for managing and maintaining their fleet of BMW Bicycles, while tuning and fitting the bikes, providing helmets, locks, picnic baskets, and water, in addition to advice about the best routes. Now in its third year, the Fairmont Pacific Rim now boasts a pair of “Bike Butlers” (one of whom is female), with the demand (and their fleet) growing year after year.

Experiencing how easy it can be in a bike-friendly city 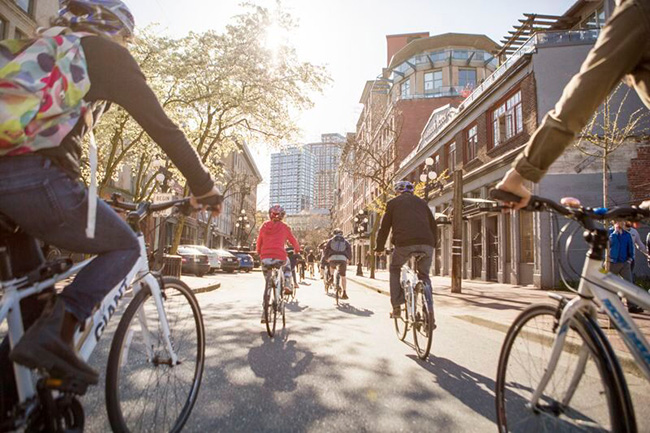 Perhaps the biggest success story to arise from Vancouver’s bicycle revolution belongs to Cycle City Tours. “Chief Pedaler” Josh Bloomfield founded Cycle City in 2010, offering storyteller-guided bike tours, a venture that has since grown to a staff of 13 full- and part-time employees. Demand was such that earlier this year, Josh expanded his business into a new, brick-and-mortar storefront along a protected bike lane on Burrard Street (a location he admits he wouldn’t have considered just four years earlier). The shop offers a fleet of upright city bikes, family-friendly accessories, self-guided tour maps, picnic lunch boxes, and expert local advice from their knowledgeable staff.

The response in the first three months has been absolutely phenomenal. “We’ve run out of bicycles, helmets, and locks countless times,” Josh recalls, “And we have over 50 people touring the city every day of the week.” And much of that clientele makes a point of coming back for more. “We get a lot of repeat business,” Bloomfield explains. “Our typical customer is visiting Vancouver from a place such as Florida or Texas, with no concept of how a bike-friendly city should look or feel. Once they get out on the bike and see how easy and comfortable it can be under the right conditions, they often return the next day to rent a bike and explore other, more distant parts of the city.” Josh notes many of these people return home with stories and photos of our bike-friendly city, and then resolve to make change in their own town.

“The seawall is definitely a ‘Gateway Drug’,” concedes Bloomfield, “But once they are confident enough, our customers will ride as far away as Jericho Beach, Queen Elizabeth Park, or even the North Shore, provided there is an acceptable bike route.” With this in mind, it is only natural that Josh is an advocate for improved bike infrastructure, and makes a point of attending open houses and council meetings to voice his opinion, such as the newly-announced upgrades to the intersection at Burrard and Pacific (which is quite literally outside of his door). “We send a lot of folks through that intersection on a day-to-day basis, so it really is in everyone’s interest to get it right.”

Vancouver as a world-class cycling destination 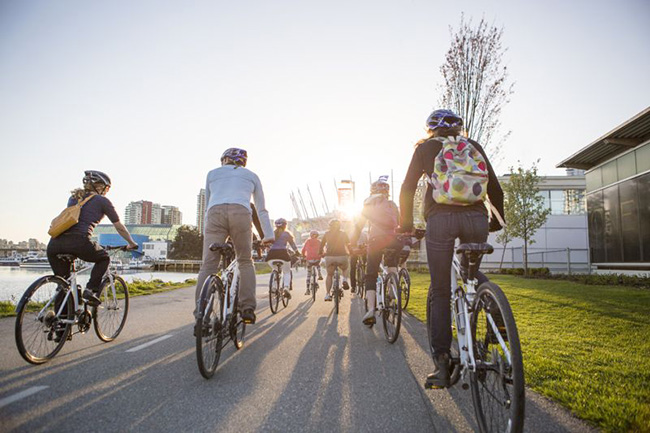 Whether we want to acknowledge it or not, Vancouver is quickly establishing itself as a world-class cycling destination. Tourists from around the world are now flocking to our city to cycle our traffic-calmed streets, protected bike lanes, and stunning seawall. Hotels are clearly catering to their cycling guests, bike rental and tour groups are growing in leaps and bounds, and businesses along certain routes are seeing a rise in the number of tourists pedaling out to spend money there.

The question becomes: shall we embrace this trend, and continue to build better bike lanes outside of the downtown peninsula, along well-frequented high streets such as Commercial Drive, Main Street and Broadway? Or will we insist on relegating cyclists to shared, backstreet bikeways along Woodland, Ontario and 10th Avenue, most of which are uncomfortable, inconvenient, and out of the way? Given the mounting evidence, merchants along these busy streets should be clambering for improved access to deep-pocketed tourists headed their direction on two wheels. Let’s hope they’re paying attention.