The City of Vancouver is considering alternatives to make both Granville Street and Cambie Street bridges more pedestrian and cycling friendly. In its current state the Granville Street Bridge is a vastly underutilized route for pedestrians. As vehicle traffic continues to decline in the city core, proposals such as this make more sense.

Granville Bridge with two lanes reallocated for pedestrians and cyclists 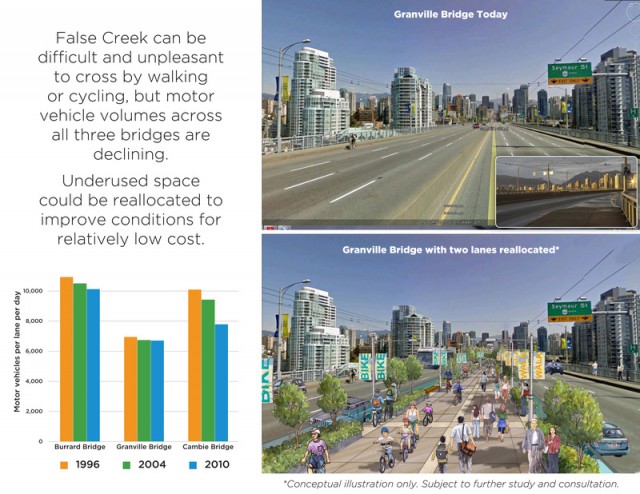 As the graph above indicates car travel on the crossings has been declining. The most notable decline can be seen on the Cambie Street bridge. The reason, the introduction of rapid transit along the corridor. Before the Canada line, Cambie Street was routinely clogged during the morning and afternoon rush hours. Now it’s a breeze to cross that bridge and get from one end of the city to the other. Adding a bike line, similar to how it was done for the Burrard bride would not create major traffic concerns.

The Granville Street bridge has always been vastly under utilized and taking away two lanes would not impede traffic as much as it has on the Burrard Bridge. Furthermore, with the addition of more residents planned near the north end of the Granville bridge (See removal of Granville Loops and BIG Tower at Beach and Howe),  a great pedestrian connection to Granville Island would be welcomed by the new residents/neighbourhood. I also think that Granville Island should get rid of cars from the public market, but that is another story for another day.

Remember the proposed cycling and pedestrian only bridge over False Creek? 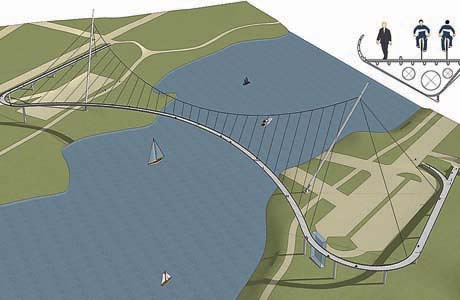 The above was proposed in 2009 and thankfully never saw the light of day. It would have been an expensive and unnecessary additional crossing over False Creek. Adding bike/pedestrian lanes to existing, underutilized infrastructure makes more fiscal sense.

The city’s recent push to become more bicycle and pedestrian friendly is one out of necessity. The shift will infuriate a few drivers, however, those that live in the city, realize the need for alternative options. The addition of bike/pedestrian lanes on Granville and Cambie bridges are great steps. All this is part of the city’s attempt to become the most bicycle friendly city in North America.

However, the city needs to do more than just adding walking/cycling paths. It needs more rapid transit. The region as a whole needs more light rail. Personally, I’d love for the Vancouver Street Car to be built soon and finally link Granville Island to the rest of downtown Vancouver.