What does being bike friendly mean to you?

Perhaps a strange question, unless you work at (or run) a business that depends on happy staff and customers, some of whom arrive by bike. Then it becomes a pretty important question to answer.

Being bike friendly is actually a big deal; a 2014 study by the Alliance for Biking & Walking shows that employees who ride their bike regularly use 1/3 fewer sick days than people who don’t cycle, cut their health costs in half, and double their productivity. 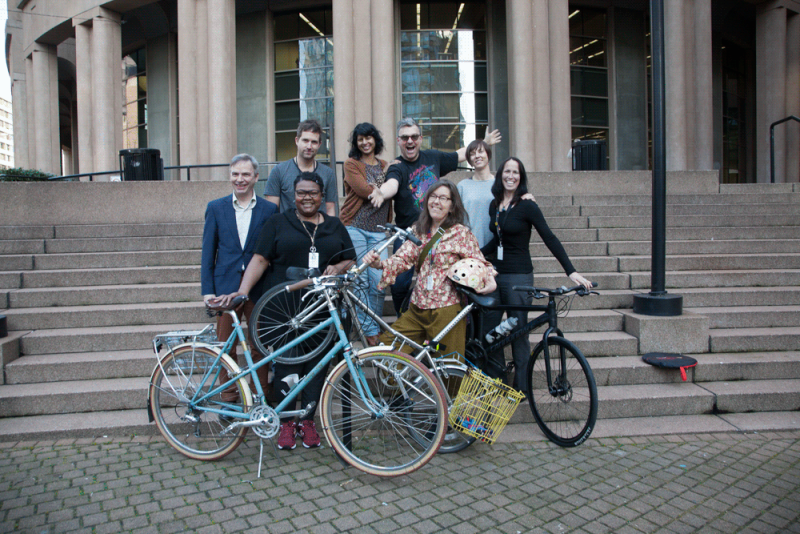 Staff of Vancouver Public Library, including members of Pedal Pushers

What about consumers? People who journey by bike to retail businesses tend to shop more frequently and spend on average about 25 per cent more each month than their counterparts in cars.

These numbers surprise many who believe biking and business don’t mix.

The Vancouver Public Library is one example of the many organizations who understand that the dynamic between bikes and business has shifted.

The library is committed to happy, productive staff and patrons, and Kay Cahill, head of facilities in VPL’s policy and planning team, suggests that the growth in the popularity of cycling in Metro Vancouver coincided rather fortuitously (or perhaps strategically) with the recognition that supporting cycling aligns well with business strategy, especially in forging those important connections between management and staff.

“Being bike friendly is very tied to our core values – cycling among staff and patrons is a really good fit with our goals about becoming more sustainable as an organization,” Cahill said recently.

“Cycling in Vancouver has really taken off in recent years, and certainly the infrastructure improvements have helped with that. We see more patrons asking where they can park their bikes and which branches are on bike routes.”

“One of the obvious signs of more staff cycling was that we reached our capacity in our bike room at the Central branch a couple of years ago.”

So what has VPL done to be more bike friendly? First and foremost is collaboration between management and staff, particularly via a group called Pedal Pushers, a sub-Committee within the union’s Wellness and Environmental Awareness Committee.

Pedal Pushers was started by VPL union members (CUPE L391) who are passionate about cycling, particularly in supporting newer cyclists who appreciate being welcomed into the active transportation fold. CUPE 391 provides the Pedal Pushers with a small budget to arrange events like cycling workshops, while library management provides space to host the events.

Pedal Pushers also run a Bike Buddy program on the VPL intranet, where new cyclists can find someone in their neighbourhood to bike with them to work the first few times, to help them find that confidence and find out what’s the best route to work.

As for patrons, they recently updated VPL.ca with information about the closest bike route to each branch, and where the bike racks are located, which now sits alongside parking and bus route information.

Talk about bike friendly. It’s no wonder that the Vancouver Public Library won “Most Bike Friendly Workplace” at the 2013 Bike Friendly Business Awards.

“Biking to work is common ground,” Cahill said, “something the union, management and patrons all want to support.”