When Metro Vancouver voters overwhelmingly voted “no” in the recent transportation plebiscite, they rejected a 0.5% sales tax increase in exchange for an essential package of infrastructure improvements proposed by the Mayor’s Council.

During the 16-week campaign, much of the debate and discussion focused on the big-ticket items, like the Broadway Subway, Surrey Light Rail and the Pattullo Bridge Replacement. Lost in the shuffle, however, was a paltry amount of money – about $161 million or 2% of the budget – for walking and cycling improvements across Metro Vancouver (likely because getting around by foot or bike isn’t nearly as sexy as roads, bridges, buses and trains).

In the grand scheme of things, this money would have been a drop in the proverbial bucket. But for the health, safety and happiness of our residents, it would have been transformational; that is, a 10-fold increase in active transportation spending across every municipality in the region, from West Vancouver to White Rock.

Which is why this loss could be the biggest tragedy to arise from the failed plebiscite. By allowing ourselves to become caught up in anti-tax rhetoric and TransLink’s public relations woes, we allowed a once-in-a-lifetime opportunity to slip through our fingers. We rejected a substantial, reliable source of funding that would have been a giant leap towards a more walkeable and bikeable Metro Vancouver.

Just imagine – for a moment – what an exponential increase in spending on walking and cycling infrastructure would look like. Countless dangerous intersections and crosswalks would be upgraded. Miles of sidewalks would be built. Lighting conditions would be improved. And 2,700 km of bikeways would be installed (including 300 km of on-street protected lanes).

Every municipality in the district struggles with budgetary issues, even in Vancouver, where the biggest gains have been made. Most can only to afford to upgrade a handful of deadly roads, intersections and crosswalks each year, a decision largely based on collision and fatality rates. The vast majority of their transportation budgets are eaten up by the automobile, with costly road construction and maintenance projects.

The region’s bike network is filled with gaps, and far from fit for ‘All Ages and Abilities,’ the standard to which cities around the world are now designing their infrastructure. Getting around by foot is often just as difficult, proving to be unsafe and unpleasant, especially for our most vulnerable, such as seniors and children, the latter of whom didn’t have the luxury of casting a ballot. 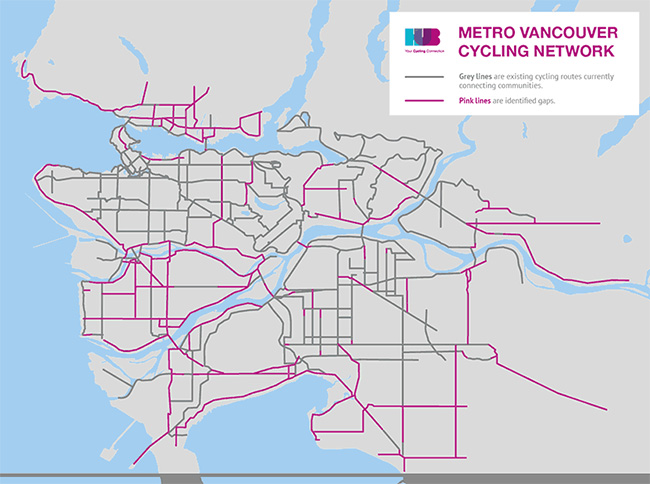 Regardless of how the plebiscite played out, most – if not all – of these high-cost projects will get built over time. Individual mayors are already scrambling for a ‘Plan B’ that will, no doubt, find a funding source, and ensure high-profile ribbon cuttings take place for the cameras.

What remains to be seen is whether the mayors’ collective vision for a more walkeable and bikeable Metro Vancouver will be abandoned. As it stands, the region’s 21 municipalities are left to fend for themselves, struggling with a budgetary crisis that only promises to get worse. Despite building, operating and maintaining 53% of our public infrastructure, they collect just eight cents of every tax dollar, with no help from the provincial or federal governments in sight.

In a region where one in four residents suffer from obesity, and instances of heart disease, asthma and diabetes are on the rise, this minuscule investment in our public health and quality of life should have been a “no brainer.” Walking or cycling from A to B is an ideal way to incorporate exercise into our daily routine. But, in order to help make that happen, we must recognize the tremendous return on this investment, and start paying it the budgetary respect it deserves.