Over 600 people lined up in front of the Convention Centre Sunday morning, all trying their luck to get on the first  Season of Big Brother Canada — and Hayden Moss, winner of Big Brother 12, was there to watch it all go down. 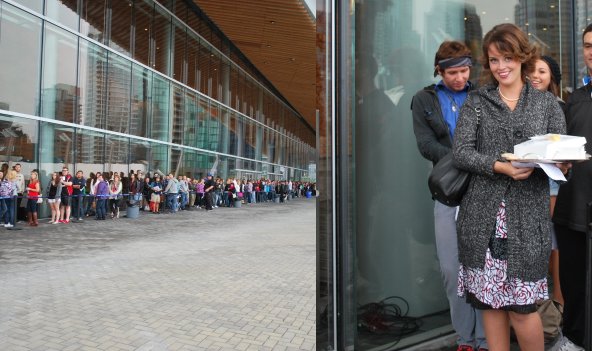 Being first in line, never hurts

It was a gathering of exhibitionists, and the Big Brother casting team would expect nothing less. When it comes to getting noticed in a crowd, it’s all about appearance. Some people attempted to stick out by dressing up – One guy was dressed as a police officer, which looked straight out of the Village People, while others took a different route and tried grabbing the producer’s attention by “engaging with their surroundings” – whether it was climbing the giant Orca, or running up the line pumping the crowd —  everyone wanted to be in the spotlight, and this was their 5mins. 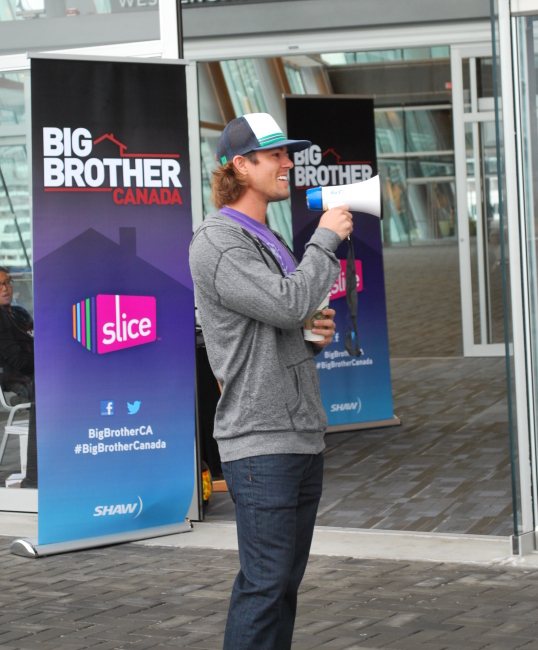 Hayden pumping up the line.

Hayden Moss, one of the Big Brother power houses who won Season 12, was at the open auditions to hype the crowed and show his support for the inaugural season of the show that set his life down a very unique direction. On the show, Hayden was part of “The Brigade” alliance, along with Enzo, Matt, and Lane. Hayden’s closest friend inside his Brigade alliance is Enzo but he also befriended Lane, Kristen, Kathy and Andrew.

Hayden’s nickname within his alliance was “The Animal”; he knew how to play the game and played it well. He describes himself as “outgoing, athletic and charming”— and I assure you after speaking with Hayden, he is a genuinely awesome person, (but let’s keep it low key, we don’t want to ruin his street cred).

I had the luxury of hanging out with Hayden at the audition, and got a chance to ask him a few questions about Big Brother and the upcoming season of Big Brother Canada;

Felix: How would you feel about returning to the Big Brother House for All Stars 2?

Felix: What are your thoughts on Big Brother 14 and who did you think would win?

Hayden: After the fact… I really think Dan played the best game, but I was rooting for Ian. I couldn’t be more stoked about the outcome!

Felix: Aside from any of the House Guests from Season 12, who would you most like to play Big Brother with?

Hayden: I call this the “Legends and Models” category. I’d love to play with and beat the legends of BB… Dr Will, Evel Dick, Dan Gheesling, Mike Boogie etc, but I would love to live in a house with some of the models like Cassi Colvin and Kara Monaco! For obvious reasons…

Felix: When you joined the brigade, did you think you would make it to the final two?

Hayden: The short answer is YES! I knew I was going to win! BB is a very tough game, and you have to have confidence, if you don’t believe in yourself you wont last!

Felix: How did you feel about back stabbing Brittany?

Hayden: I honestly felt awful about it. She’s a great girl, but at the end of the day you have to do what it takes to win!

Felix: Are you still in touch with the brigade members?

Hayden: Absolutely, we shoot the shit all the time. We will all be life long friends!

Felix: How did it feel living in the Big Brother house for 79 days?

Hayden: Brutal and Amazing! Its not easy being away from… EVERYTHING for 3 months, but the payoff was worth it!

Felix: How did winning the Big Brother grand prize change your life?

Hayden: Obviously my bank account is a little healthier these days, but the friends and networking opportunities are what really made the experience a life changer!

Felix: What was your best experience in the big brother house?

Hayden: When the last vote went my direction and I knew I was getting PAID!

Felix: Do you have any advice you can give for the upcoming Big Brother Canada contestants?

Hayden: Don’t get complacent, keep your eye on the prize, and expect the unexpected!

Big Brother Canada is set to air February, 2013 on Slice.