It’s been a week since the Vancouver Fashion Week gave its last curtain call. So what did we learn with its success?

Asking local Vancouverites what they think of Vancouver fashion is one thing, but asking internationally acclaimed designers is another. The Vancouver Fashion Week is much praised for its support for different designers world wide, and not just for Canadian designers. Knowing that designers from all over the world were coming to the show, I thought this would be the best opportunity to get some real outsider insight on the state of Vancouver fashion. So here’s what international and Canadian designers have to say about Vancouver and our fashion so far:

Xsenia & Olya: “The fashion show was actually well organized,” said Xsenia Runa. “I was surprised, the models and everyone was extremely helpful. People were are amazing and incredibly smiley. It was definitely very enjoyable”. The Xsenia and Olya brand was created by the partnered designers, Xsenia Runa and Olya Shishkina, who met in London. They made  quite an impression on the runway with their vibrant digital prints and geometric dresses. “I think Vancouver fashion is starting to get better,” said Runa, “and it’s nice that you are funding these great designers to bring to your own country, where everyone can see. It’s really the place for emerging talent”. 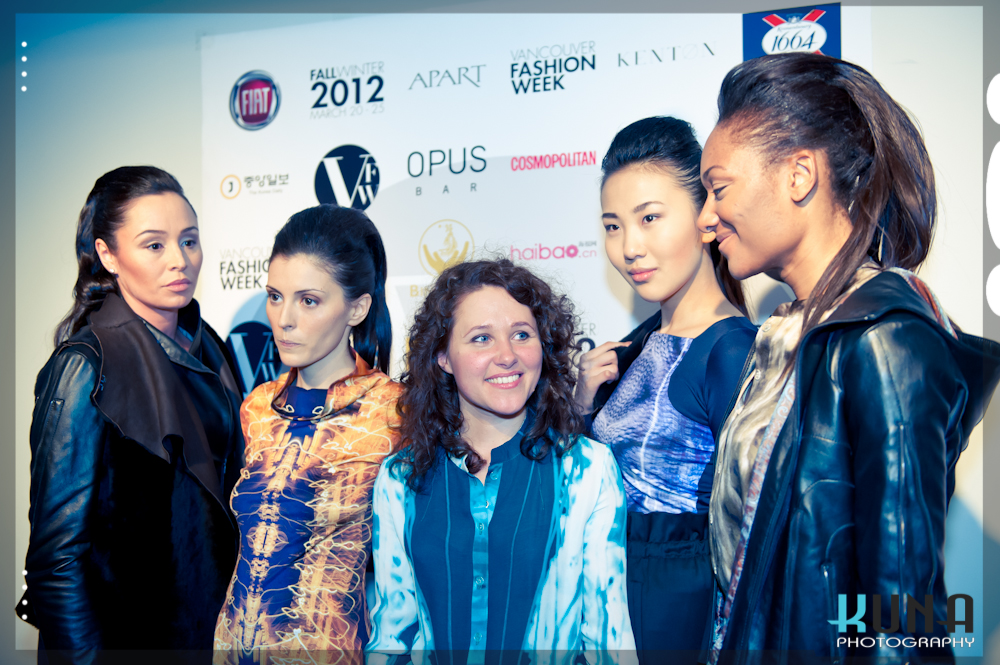 Similar sentiments about Vancouver’s improvement is also cited by Angelina Park: “Vancouver fashion is getting better now, but it’s still like a baby compared to other cities” said Park, who also told me that she loved Vancouver because it was similar to her Korean hometown located near mountains and the sea. “Nevertheless, it has made some really good improvements, and I really want more designers to come to the Vancouver Fashion Week, because it is getting famous”. 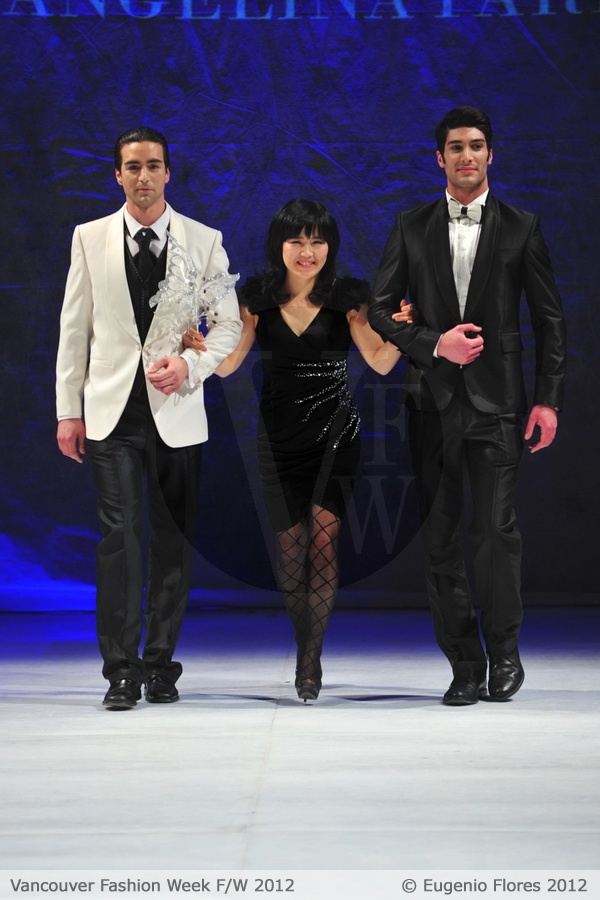 Local designer, Farida Lalji, also shares the same view: “I noticed that Vancouver has been a little bit behind in fashion, and a lot of other countries are taking over” said Lalji, who made a name for herself as an Indian designer in Vancouver. “Regardless, Vancouver has been my home for the past 40 years, and I enjoyed it. Professionally, it has given me a lot of strength”. Lalji’s exotic design featured traditional Indian clothing, but with incredibly high-quality and lustrous textiles. “Vancouver fashion is finally coming up, and it’s doing very well. It will catch up with the rest of the world as usual”. 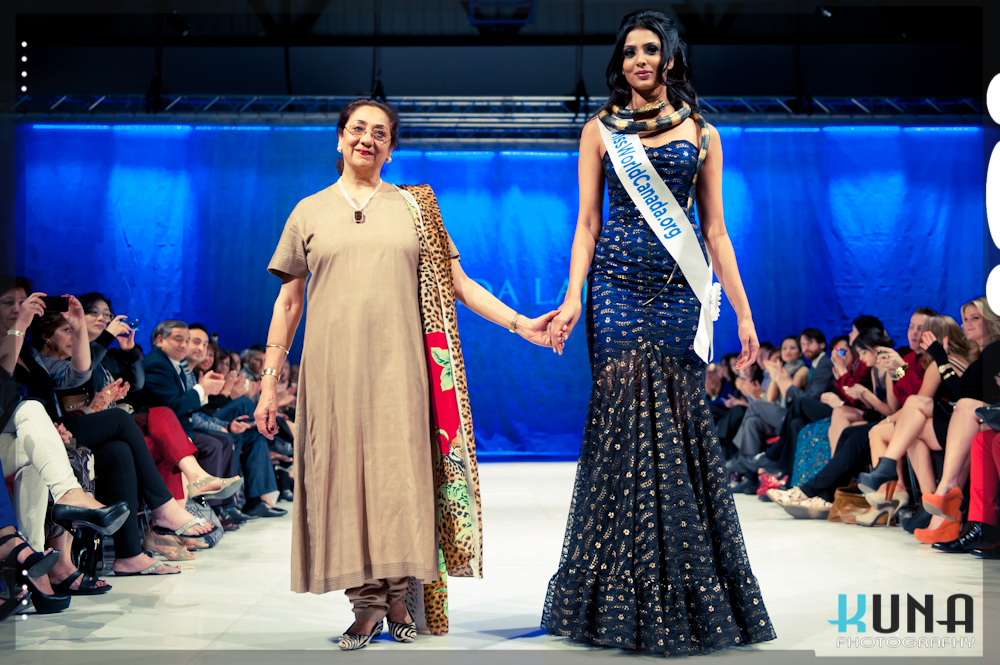 Another Canadian designer, Sunny Fong from Toronto, had interesting observations about Vancouver Fashion: “It’s definitely different–more organic in a way. ‘Just the way it’s designed: the lines are more fluid, whereas I find in Toronto it’s all about structure. I think it has to do with natural surroundings”. Fong, who also admitted to me that he enjoyed the fresh air in Vancouver, became a highlight for the Saturday night show when he showcased his latest collections, VAWK and VAWKKIN (inspired by sci-fi and samurais). “The recent Vancouver Fashion Week definitely shows that everyone is interested in fashion. I’ve heard that it’s growing every year and it’s getting more and more attention, which is truly amazing. Vancouver is a great place, and I would love to come back!” 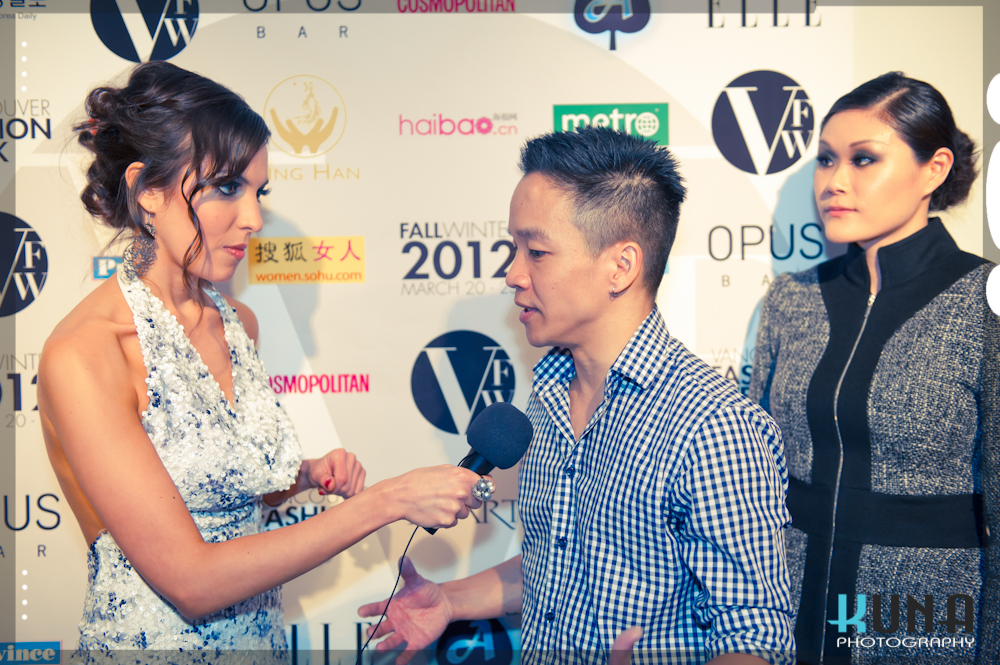 Internationally renowned designer, Teresa Rosati, was also mesmerized by the runway shows during the Vancouver Fashion Week (which is quite humbling considering that she is the Teresa Rosetti!): “I liked the shows very very much!” said Rosati. “I saw some of the collections and it was very good, very high-level fashion –I just loved it!” Rosati, who is based in Poland, is one of the most esteemed designers of her country. Apart from being showcased in the Beverly Hills Fashion Festival, she is also the designer for two Polish First Ladies. She  also shared with me that one of her favourite designers throughout the Vancouver Fashion Week was actually Toronto designer, Sunny Fong. She was also thrilled by the fashion performance shows that occasionally lighted up the runway (like Mackenzie Jones’ show). “When I got the invitation to do a show in the Vancouver Fashion Week, I did not hesitate– not at all! Vancouver is beautiful and such an amazing city with very lovely people. You really live in such a beautiful place!” 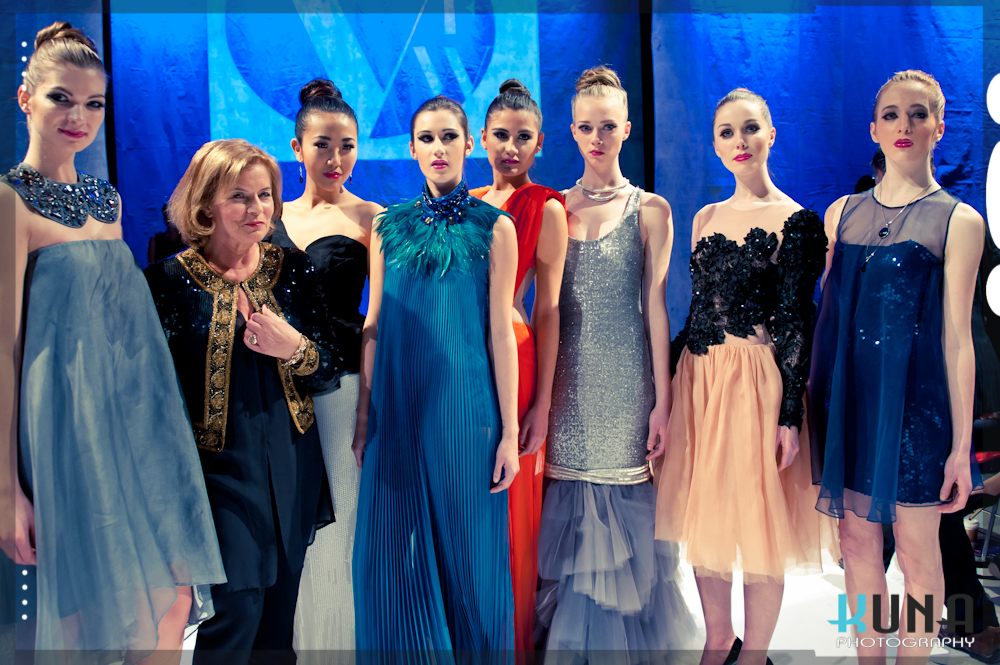 They say the thirdtime is a charm, and that was certainly the case for Ha Sang Beg, who just did his third season on the Vancouver Fashion Week: “Vancouver fashion upgraded really rapidly, and a lot of contemporary and radical designers are gathering around” said Ha Sang Beg. “The first season I attended had designs that were more organic and sort of … “unique” in a way. But that changed and it developed into a more contemporary and modern-urban style. It’s very nice to see that they are developing really well, and I’m proud to be part of it”. In addition to his comment on Vancouver Fashion Week, Ha Sang Beg shares a very specific hope for future Vancouver fashion: “Vancouver fashion should have more mens wear”, he said. “Because there are a lot of fashionable guys in the streets, and some parts of Vancouver have very fashionable people, especially with mens’ fashion. But not many people are attending the Vancouver Fashion Week for mens wear, so I hope there is more of it next year”. 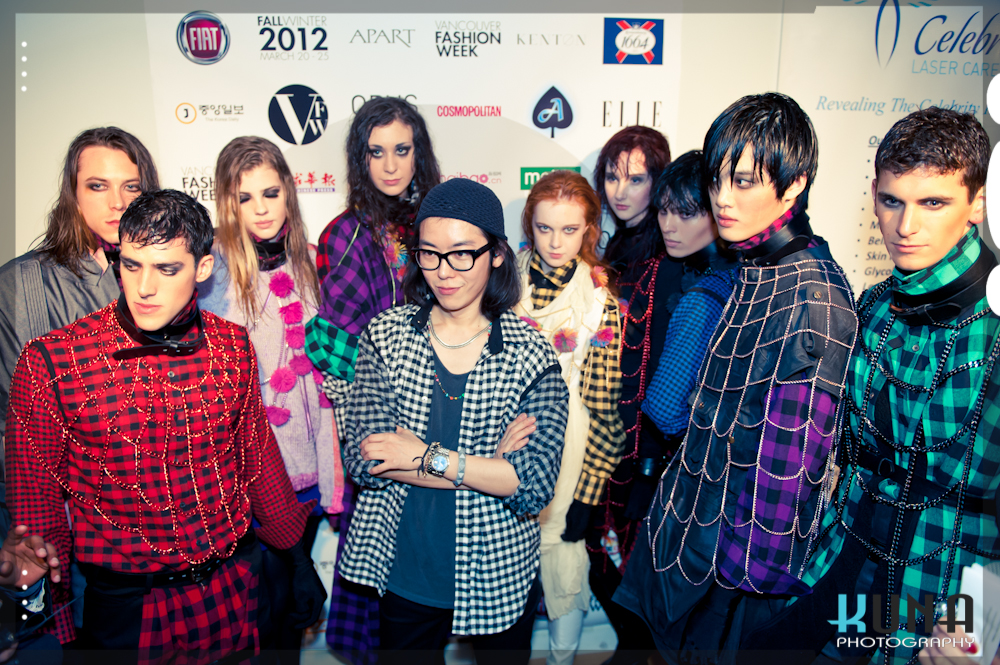 Ha Sang Beg was absolutely right; there certainly is an imbalance of women’s wear and men’s wear during fashion shows. Don’t you agree? Fortunately, Brazil based designer Solon Diego answered that demand with his men’s fashion collection, Soddi: “Vancouver is a very surprising city,” said Diego through his personal translator, “the way people use fashion and the way they use their clothes. It’s very interesting the way it happens, and I’m inspired by it”. Diego’s collection definitely stood out from the roster of designers because of his all-male collection, with its futuristic and steel toned creations. Hopefully, this would inspire more mens fashion in Vancouver. “Vancouver fashion still has a lot to grow,” said Diego. “In the future it will occupy its own place in the fashion world, and I think it’s only about to get more extravagant. And for sure, I would love to come back to showcase my summer collection!” 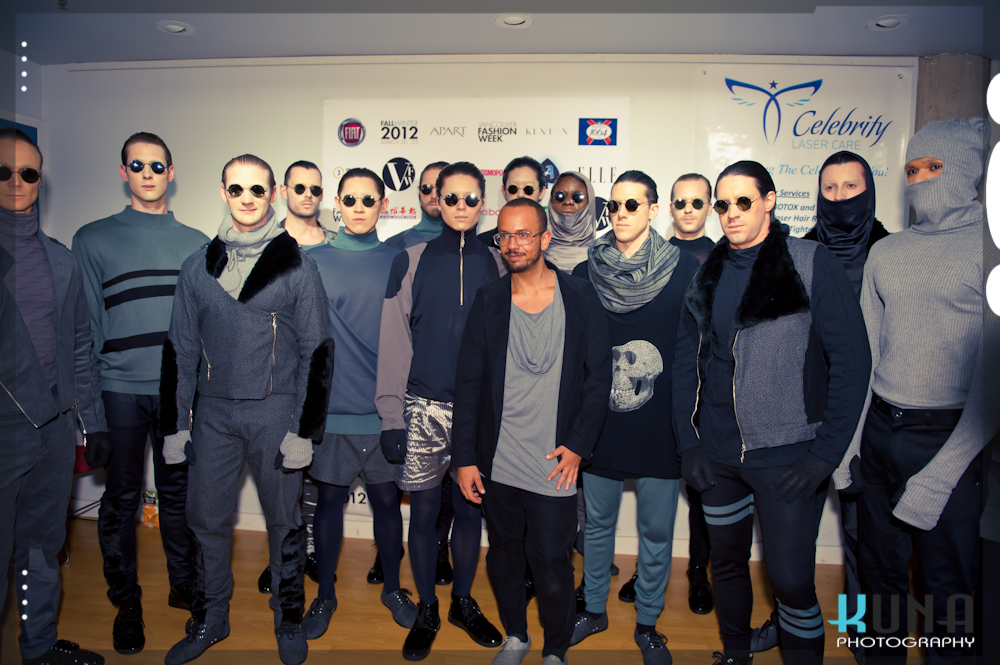 And last but not least is Aleem Ariff, the Calgary based fashion designer and creative director of Bano eeMee: “I think Vancouver fashion is getting better” said Ariff, who actually came as a volunteer for last season’s Vancouver Fashion Week. “Although it’s got some bad reputation for its lululemon culture. But I have been observing people. I was at a coffee this morning, and I just looked at people walking down the street. I saw there was a lot of awareness in terms of fashion: People mix and match, there’s colour –I love it! People dress their own style, and these are the type of people I design for.” Ariff’s collection featured a lot of metropolitan styles with a bohemian twist, making it a very unique fashion but also very wearable… I would so buy his jackets and studded purses! “Honestly speaking, I moved here from Boston, USA, but I love Canada, and I see huge potential in terms of fashion”, said Ariff. “I think as Canada is becoming a more and more important country, fashion is gonna’ happen. Canadian fashion in general is going to be bigger, and I love to be a part of the Canadian fashion community. So Vancouver has huge potential. A lot of people love Vancouver for just the way it is, so it’s definitely a fashionable destination. Even though people talk about Vancouver’s lululemon culture, I think they’re just jealous of all the healthy people walking around your streets”. 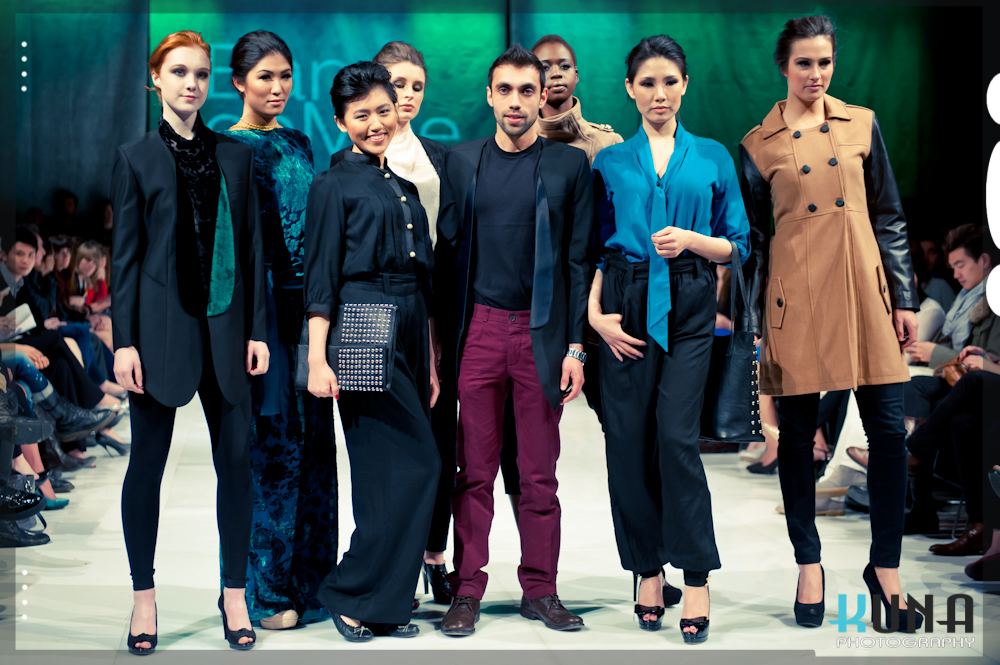 Very encouraging, isn’t it? ‘Looking forward for the next fashion season!

For more information about the designers visit the Vancouver Fashion Week Blog.

Photos are courtesy of the Vancouver Fashion Week and Kuna Photography.

For more on my experience with VFW, follow me at Tattles, Tales n’ Things.