On the morning of Saturday, April 9, our family set off to enjoy the Bike the Blossoms social ride, and document the annual gathering that takes people on bikes along some of the best cherry blossom-lined streets in the city. It’s a treasured springtime tradition we’ve observed for several years now, watching it grow in size year after year.

Little did we know at the time, but we managed to inadvertently photograph one of those brand new riders in an image we shared in our Facebook album of the event. 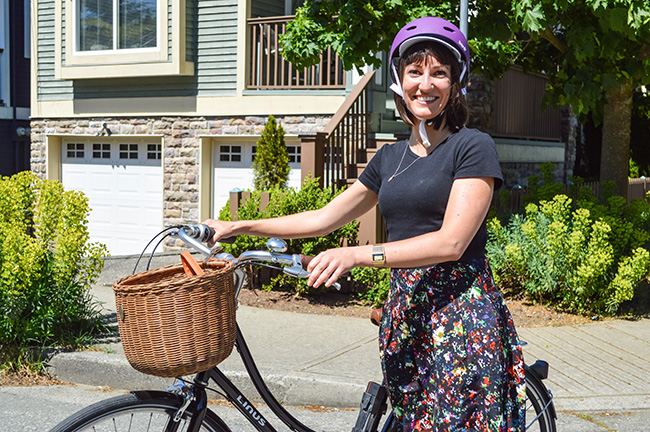 Larissa Walkiw didn’t stand out in the crowd of bicycle riders – at least not until long after the event. After being spotted and tagged by a friend, she shared our photo with a very touching soliloquy about how, just four months earlier, she had started on an exciting – but incredibly nerve-wracking – journey towards getting back on a bicycle, beginning at a bike rental shop in Downtown Vancouver.

“’The last time I was on a bike, The Lion King was still in theatres,’ I joked to the bike rental dude, partly to make conversation but mostly to make myself feel better about the fact that I was about to do this thing – this perfectly ordinary (and in most cases unremarkable) thing of riding a bicycle. And I was terrified,” Walkiw confessed in a Facebook post, outlining the tribulations of the past four months. 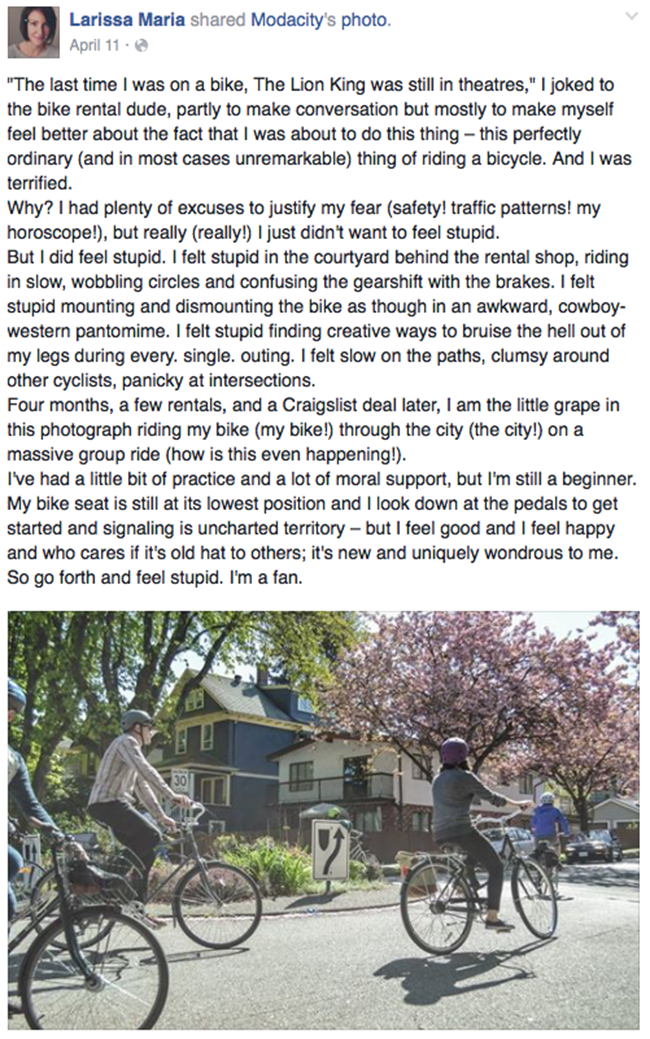 We take so many photos of people enjoying bikes in this city, that it is fairly common to have a friend of a friend tagged in one of our images. But rarely does one of those tags reveal such an inspiring and heartwarming story – and one worth sharing.

Like many, Walkiw’s childhood contains memories of a beat up mountain bike that she quickly abandoned around the time she became a teenager. After that, the idea of getting on a bicycle fell by the wayside, becoming a distant memory of a two-wheeled toy that never quite managed to capture her interest. But those memories began creeping back around the time she packed up and moved to Vancouver in 2014. 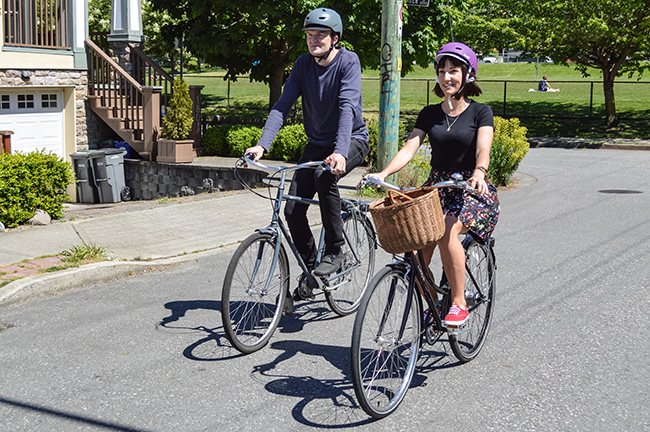 “After completing my studies in Chicago, I decided to give Vancouver a try because it’s just so beautiful here,” Walkiw recalls. “It wasn’t long after I arrived that I noticed all the people out on their bikes, and began to feel like I was missing out.”

Her impression of cycling prior to arriving in Vancouver was predominantly images of sport cycling – extremely fit men in spandex dodging traffic and racing at high speeds on expensive carbon fibre road bikes; intimidating and prohibitive imagery that made cycling look inaccessible, complicated, and quite frankly, incredibly dangerous. 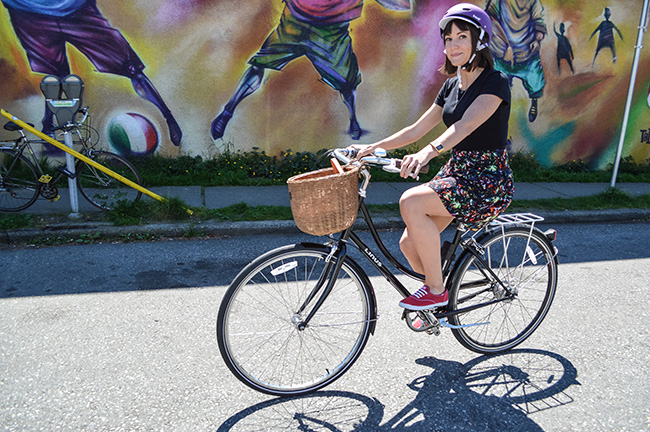 In stark contrast, spending her weekends on the seawall or walking through the city’s many neighbourhoods, Walkiw saw just how bike-friendly Vancouver was becoming, and her opinion of bikes started to change. “I kept seeing people of all ages and sizes riding bicycles and started to feel encouraged,” reflects Walkiw.

This message of depicting riding a bike as something that anyone can do is a strategy we at Modacity have long been trying to promote, and so hearing that positive imagery had a direct impact on someone like Walkiw is very encouraging. 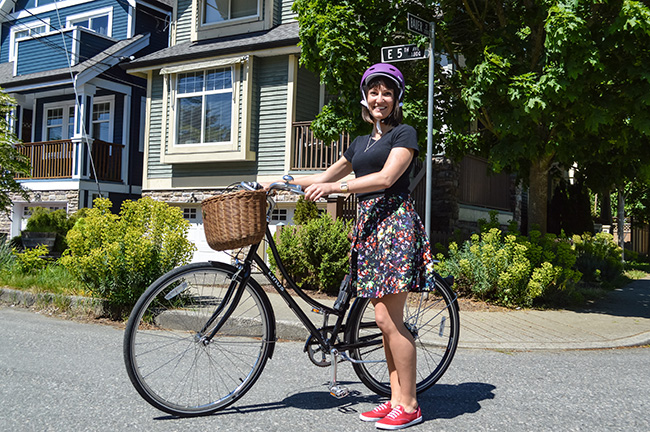 And so, late last year, with the help and support of her friend, Stuart Smith – who invited her to Bike the Blossoms and tagged her in our photo – Walkiw began renting bikes on the weekends and essentially re-teaching herself how to ride a bike.

At first, she wobbled and regularly lost her balance, feeling silly for not being able to do something a child could do. Over time though, and with regular encouragement, her nerves started to calm, and she became re-acquainted with things like balancing and stopping. Walkiw was also able to test out different styles of bikes by renting before purchasing a bike of her own, and properly search the perfect one for her. 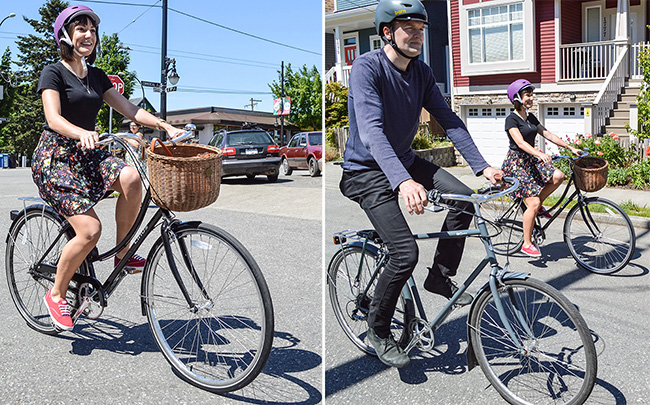 Now, thanks to a Craigslist purchase, Walkiw is the proud owner of a fully equipped Linus Dutchi – a step-through upright bicycle, complete with lock, basket, and helmet. “I love it because I can sit up straight and take in everything around me, and it’s comforting knowing I can easily hop on and off the bike if I have a balance issue or need to take a break.” Walkiw told us. Of course, we tend to agree, being proud owners of Dutch-style bicycles of our own.

With a reputation as a cycling leader, it is easy to forget that not everyone in Vancouver is comfortable on two wheels. What Walkiw’s story proves, though, is that it’s never too late to give it a try. 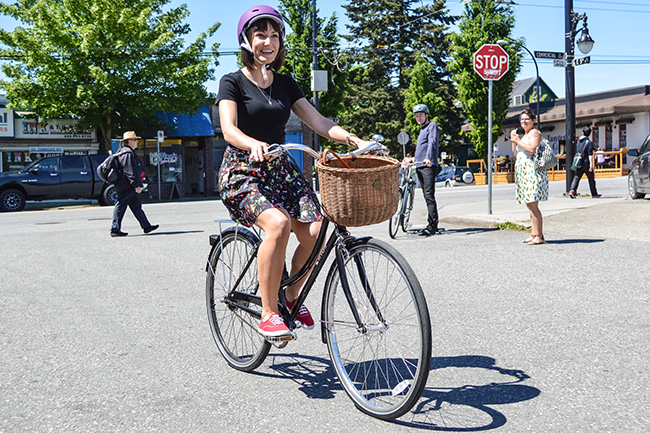 If cities provide safe, separated places to cycle, and encourage normal, everyday people to travel on two wheels, individuals like Walkiw will work up the courage to become a more regular part of the community.

“I feel good and I feel happy and who cares if it’s old hat to others; it’s new and uniquely wondrous to me,” Walkiw says. “So go forth and feel stupid. I’m a fan.”