The Better Business Bureau (BBB) is warning the public about sextortion emails from scammers, which try to blackmail recipients into giving them money.

In a release, the BBB said these types of emails “typically include threats to reveal images and videos of the victim watching or utilizing pornography, copies of their browser history or evidence that they downloaded videos from pornographic sites.”

The increase in this type of scam is “believed to be due to scammers getting access to legitimate usernames and passwords that were exposed during major security breaches.”

How the scam works:

“Generally speaking, the threat is likely an empty one, because the blackmail message usually fails to include personal information or any other details that hackers could use to increase their credibility,” said the BBB.

However, “there are cases where the victims are specifically targeted because their data was compromised in a major security breach some time ago, which exposed details for billions of users.”

In those situations, “the scammer may have your email, telephone number and at least one password, and will refer to it in the email.”

And it’s because the scammers are using real information that “the email sounds more threatening and convincing. 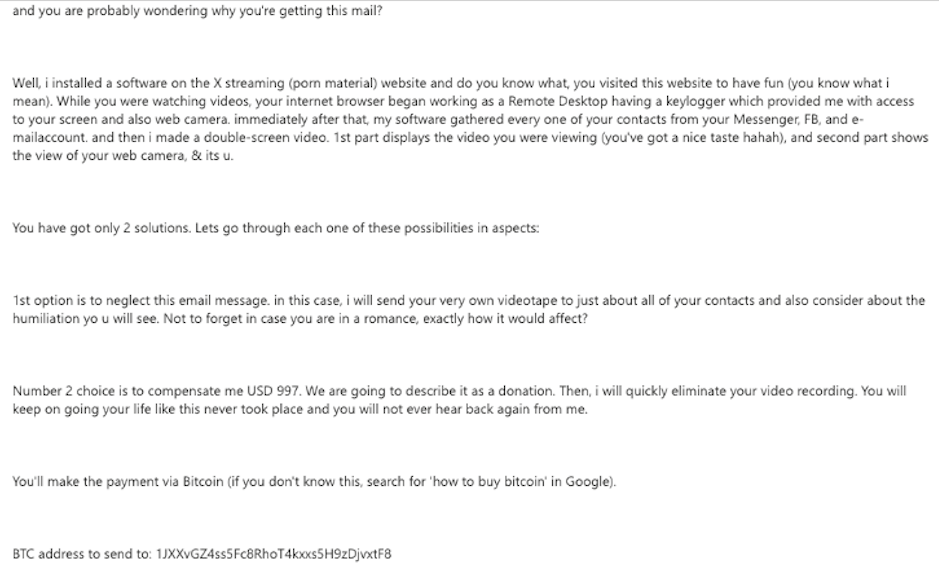 A screenshot of one of the mails received.

The BBB said that recent submissions to its scam tracker from members of the public indicate that the scammers want payments in bitcoin – “a virtual currency that is very difficult to trace.”

“It is so terrifying,” another person who received the email told Daily Hive, adding that they sat there “for the longest time” telling themselves the email was a scam.

In the end, the person said they ultimately deleted the email and no money was lost.

Scams like these show that “hackers are getting bolder and smarter,” said BBB spokesperson Karla Davis.

And the problem isn’t just confined to senior victims.

“The truth is that everyone is at risk of getting a sextortion email,” she said. “Scammers will happily play on a person’s emotions to trick them out of their money.”

And unfortunately, the threat of embarrassing footage being released “can trigger the need for self preservation, even if it comes at a cost of hundreds or even thousands of dollars.”

In light of these cases, the BBB is sharing various tips to help people protect themselves from sextortion and scams:

Some red flags that can point to a potential sextortion can be observed when the scammer:

Anyone who believe they may be a vitim of this – or any 0other scam is encouraged to report it on BBB Scam Tracker and the Canadian Anti-Fraud Centre.