After a 10-year break from the road, Bette Midler decided the showgirl must go on and brought her Divine Intervention Tour to Vancouver on Tuesday night. The diva played to a packed house of fans young and old (okay, mostly old), performing songs from her latest disc It’s The Girls! as well as the big hits from her impressive back catalogue.

Let’s get this out of the way: Midler is just as divine as ever, and there is truly no one else like her. To the surprise of no one she sounded great, she looked fantastic and she’s still as bawdy as ever. Her show is an amazing spectacle full of glitz, glamour, cool set pieces and a 12-piece band, but it’s virtually impossible to take your eyes off of Midler for even a second. She had the Vancouver crowd in the palm of her hand after just a few notes, and had them in stitches after introducing herself as the real “pearl of the Orient”.

After performing “Divine Intervention,” Midler surveyed the crowd and asked how many had driven themselves to the concert. A few hands went up, much to the singer’s relief. “So good to know so many of my fans can still drive at night,” she said. Midler singled out one section of the arena, affectionately dubbed them “50 Shades of Gray” and threatened to offer them advice on reverse mortgages. 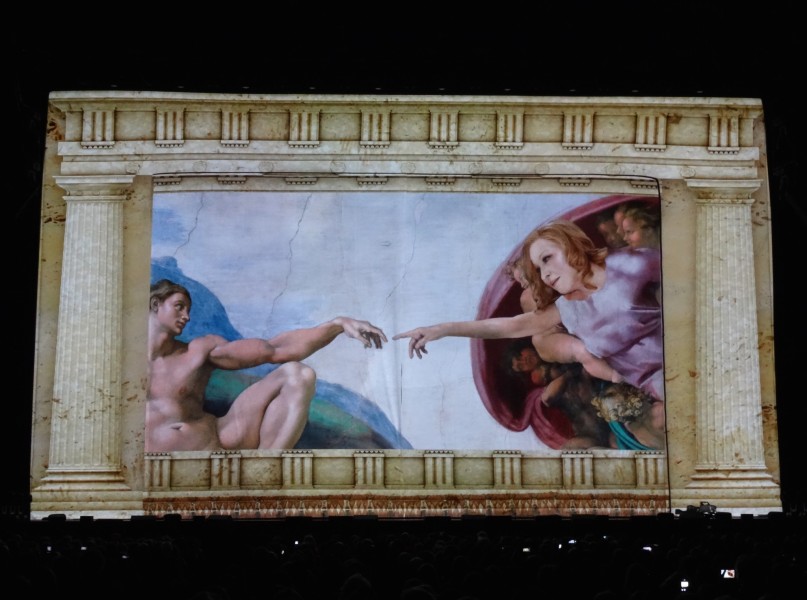 Bette was sexy and she knew it, and told us as much during “I Look Good” and “I’ve Still Got My Health”. “I know I look good because my hair and makeup people told me so. And I don’t pay them to lie!” she said to big laughs.

“I’m like vodka – ageless, odorless and tasteless,” Midler continued. “I can still do all the things the younger singers can do. I see them in their videos. Straddling wrecking balls and writhing on couches. I was writhing on a couch the other day – looking for the remote!”

“Everything you see on this stage is real. I’ve had nothing replaced except my girls,” she said, gesturing to her backup singers. “Aren’t they wonderful? They used to be fact-checkers at FOX News. Then I snatched them up, and nobody knew they were gone!”

The trio, also knows as The Harlettes, sounded great and played along with Midler, at one point pushing her around the stage on a giant couch while the diva took hits from an oxygen tank. The bit was obviously a gag, as Midler proved she can easily compete with the best of the wrecking ball-riders with her stunning voice. 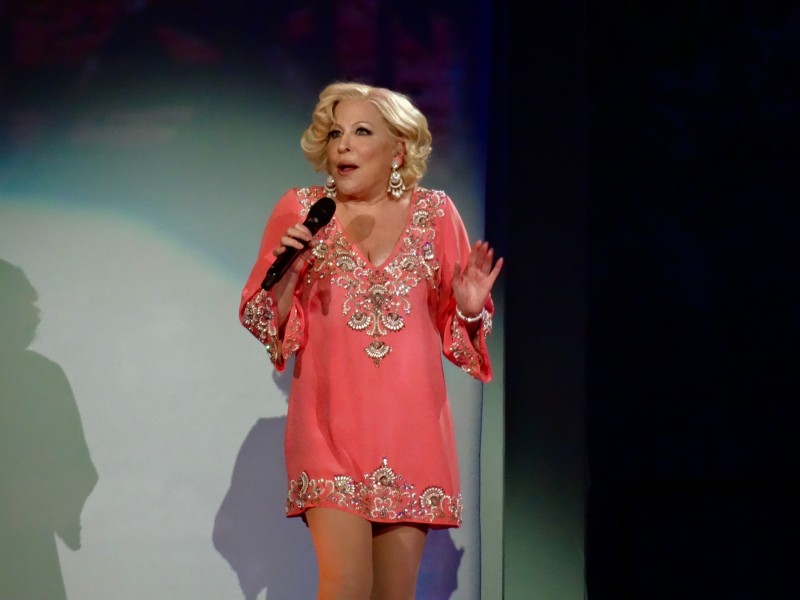 As expected, the setlist was heavy on cover songs as Midler’s latest album pays tribute to the great girl groups of years past. She sang a rousing rendition of the Exciters’ “Tell Him” and a haunting version of TLC’s “Waterfalls,” performed here as a torch ballad accompanied by just a pianist.

In addition to the covers, Midler performed some of her most beloved tracks like “Do You Want To Dance?” from her landmark album The Divine Miss M. “Beast of Burden” and her Grammy-winning ballad “From A Distance” also made the cut. The diva also paid tribute to her mermaid alter ego Delores Delago with an Oscars-style “in memorium” video montage. Yes folks, Delores has gone belly-up.

The singer had a funny bit about the world’s incessant need for Twitter followers, Facebook “likes” and the current craze of “tits being blitzed by asses.” Midler, who sang a medley of Kim Kardashian’s tweets on Jimmy Kimmel Live! earlier this year, moaned about the reality star and said “I could kick myself for not having the brains to monetize my sex life. I could’ve been a billionaire at 30!” 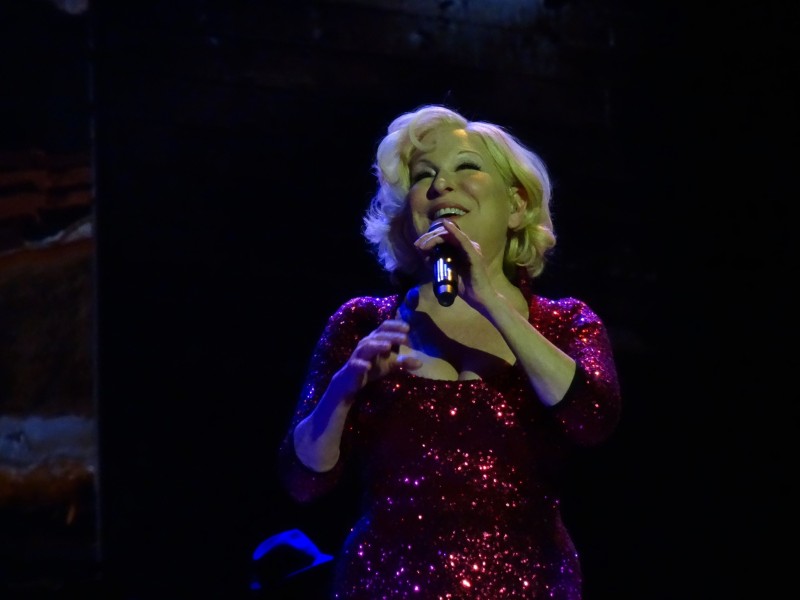 Midler then schooled Kim & Co. by showing off a series of racy selfies from her own private collection. Doctored photos of Midler canoodling with hunky celebrities were projected onto the arena’s giant screens, and each photo came with a punchline.

Vladimir Putin? “Vlad the Impaler, ha! More like Vlad the Imputent!” Chris Christie? “I can’t afford to lose a follower that size!” A fake ’80s selfie with Bruce Jenner (now Caitlyn)? “We watched Beaches and painted each other’s toenails!” Speaking of Beaches, music from Midler’s film was represented twice: first with a beautiful cover of Randy Newman’s “I Think It’s Going To Rain Today” and later with encore “Wind Beneath My Wings.”

Before starting “The Rose,” she kindly asked the audience to not sing along as “there is only room for one diva in the hockey arena. And that’s moi!” After little response from the crowd, Midler quipped “I’m in the wrong town. I shoulda said it in Chinese!” That got a laugh, but her line about not getting a free eggroll despite playing in Vancouver six times got her rolls, alright. Eyerolls! 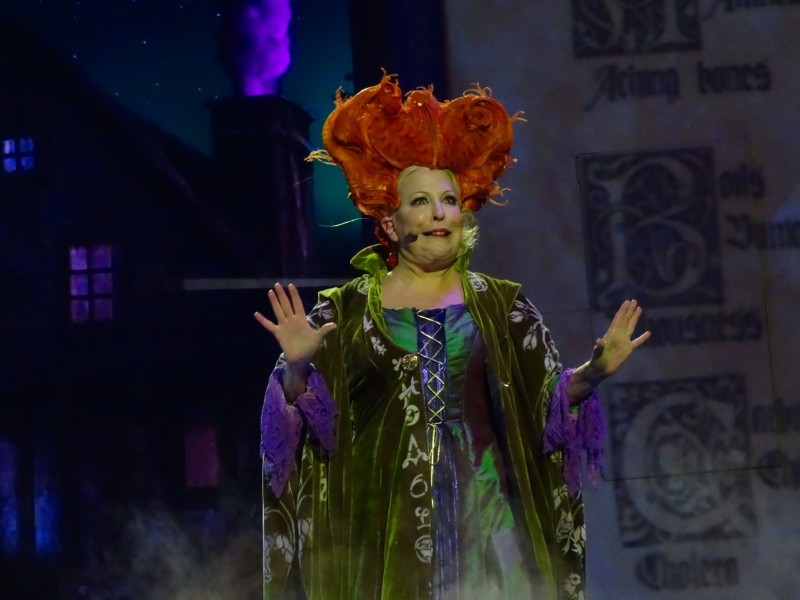 The singer finished the night with the one-two punch of “Stay With Me” and “Boogie Woogie Bugle Boy” that had the crowd on it’s feet before hitting the dessert table and calling it a night. And I can say that with authority, because I was there too.

Last Christmas, my amazing husband surprised me with tickets for Midler’s concert and the package came with a meet and greet with the star after the show. Sorry ladies, he’s taken! To thank him, I insisted we wear matching Rochelle, Rochelle: The Musical softball jerseys to the concert in honour of Bette’s legendary appearance on Seinfeld. Naturally, he was thrilled (or is too nice to say otherwise).

Once Midler finished and the curtain closed, the meet and greet group, which included a woman who said “I screamed my tits off from the second row!”, was escorted to a backstage holding room with brownies and lemon squares before eventually being joined by the icon herself. Midler was ravishing in a royal blue pantsuit which made me especially glad as our softball jerseys were royal blue, too. 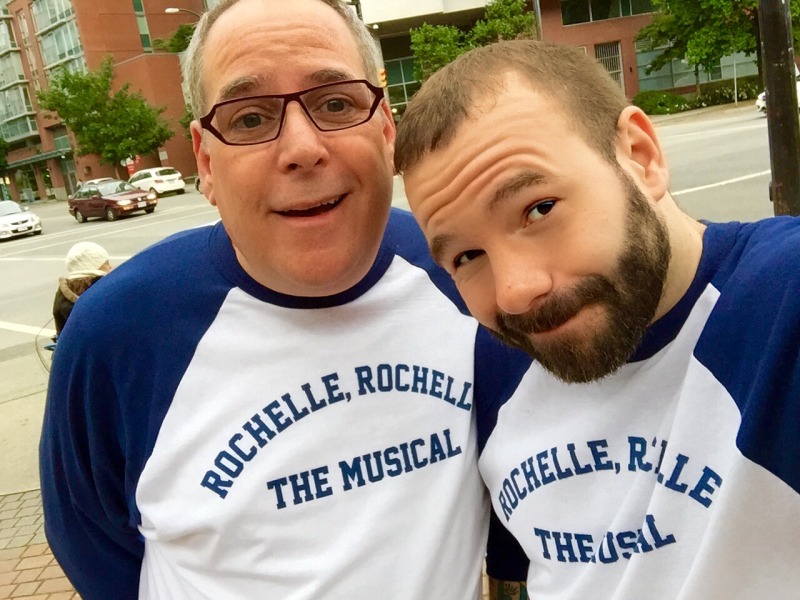 My hubby and I were the last to meet her and I managed to squeeze in a hug with the star before we posed for two pictures with her. Bette saw the shirts and said “Rochelle, Rochelle! Very funny!” I died.

She then asked how we enjoyed the show and I pointed to my guy and said “he cried through the whole thing. And he didn’t even cry when our dog died.” I was kidding, of course – the dog’s still alive. I dunno…being in the presence of greatness can make you say stupid things, I guess.

She laughed, grabbed my husband’s hand and said “I cry every night, too.” She thanked us for coming and we walked away, but while I grazed along the dessert table on the way out, Bette came behind me and said “let’s take some of these!” I’m pretty sure she was talking to someone in her very nice entourage, which is fine as I’d already eaten several brownies before she arrived.

We then saw the star being whisked down a hallway to a room that had a sign reading “MISS M” above the door. I died again. Suffice it to say, Midler was as gracious as she is spectacular and the experience was certainly worth a month’s rent or two (plus $44.80 for the jerseys). 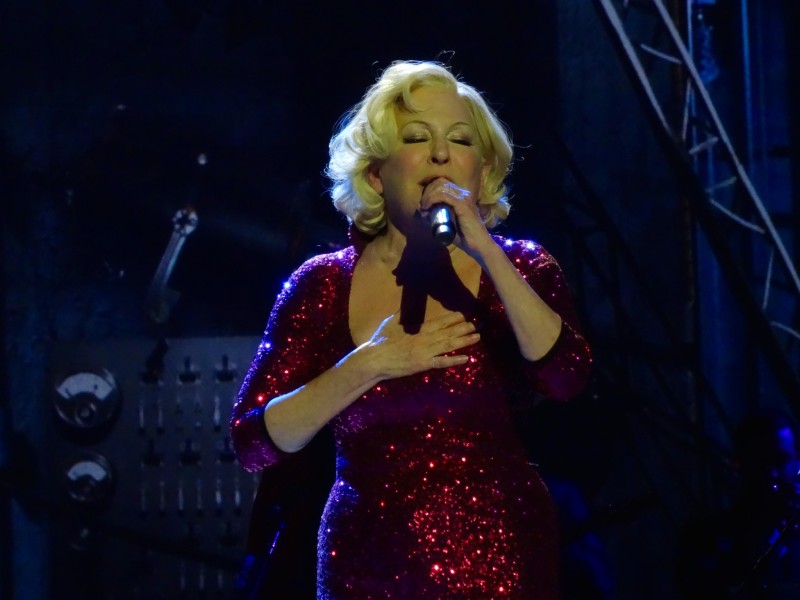