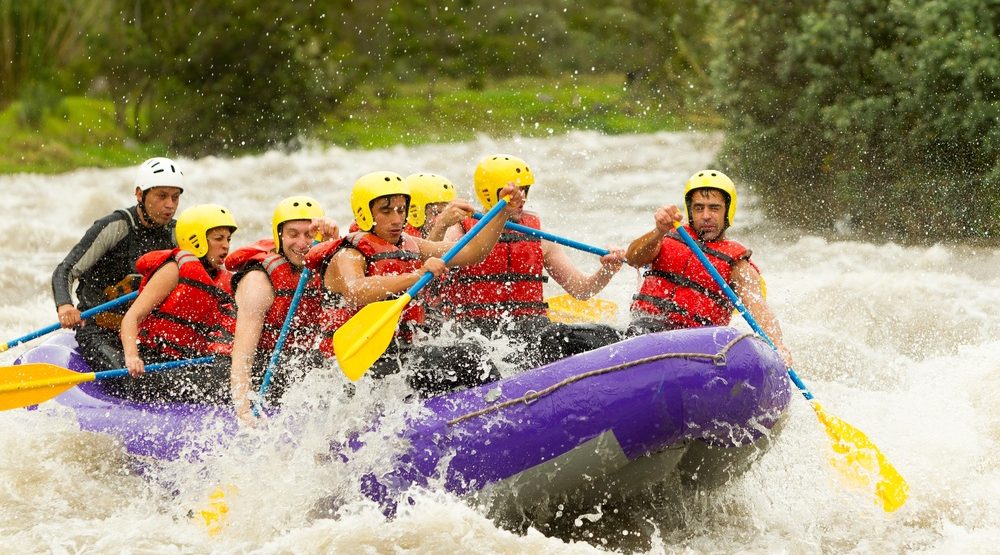 Vancouver has an abundance of green spaces for getting outdoors and playing in nature. But what if you crave an intense shot of adrenaline?

Among Canada’s most rambunctious rivers, the Clearwater tributary of the Fraser River has world-class whitewater (levels I-VI) for rafters and kayakers, and awe-inspiring views as the water roars its way through the pristine wilderness of Wells Grey Provincial Park. Tour operators like Liquid Lifestyles offer adventure packages and equipment rental.

Only an hour from Vancouver, Squamish sits at the end of one of the Pacific Coast’s deepest fjords. Every summer, climbers from around the world flock to the granite cliffs overlooking Howe Sound to test their mettle on hard-core rock climbing at Stawamus Chief and Smoke Bluffs Peak. A tightly-knit community of like-minded nature fiends and a strong pub grub/brewery culture make it worth sticking around after a day of high stakes achievement.

If biking on old railway beds, miners’ trails and whisky running routes appeals, head to  Rossland, the mountain bike capital of Canada. Serious bikers can spend a day riding the infamous Seven Summits Trail with its steep ascents, spectacular descents and strategic viewpoints. There are over 200 kilometres of maintained trails — winding single-track, technical downhill and stunted rides — to explore. At the end of a long day, stroll the quaint downtown drag or pound a craft brew at Rossland Beer Company.

Kooks only. No localz

You usually surf Tofino. This time, head south to the awesome and uncrowded surfing at Devil’s Punchbowl State Natural Area, also known as the Waikiki of the Oregon Coast. Formed by the collapse of a sea cave, this distinctive coastline is known for bizarre rock formations which allow waves to gather energy and become enormous, smashing into the rocks around the Punchbowl. Don’t miss the seals and sea lions snoozing on nearby rocks.

The park is day-use only; head to nearby Newport for food, drink, and accommodation. The oceanfront retro Agate Beach Motel has been making travellers happy since 1940.

Tying the knot and taking the plunge took on a new meaning for newlyweds Jacqueline and Matthew this week. Special thanks to @islandmomentsphotography for sharing this photo with us. Bungee jumping has never looked so adorable. #PlayMoreFearLess #WildPlay

A photo posted by WildPlay Element Parks (@wildplayelementparks) on Jun 17, 2016 at 2:03pm PDT

Stretched along the east coast of south-central Vancouver Island, Nanaimo is a rapidly growing harbourfront hub. For adrenaline junkies, it’s known as one of the few places in BC where you can bungee jump. Those looking to leap into life can take a 150-foot tandem or solo plunge headfirst over the Nanaimo River.

Over 260,000 guests have taken WildPlay’s ankle-strapped challenge, unleashing fear, freedom, joy and a heck of a lot of other powerfully addictive brain chemicals.

With its 200 horsepower engine and available 4Motion All-Wheel-Drive, the Volkswagen Tiguan offers flexible space and performance at a price you won’t believe. Whether it’s going to Clearwater or Oregon, the Tiguan is the SUV for your next adventure.