The Best Laid Plans: a Musical is a new production based on the award-winning novel by Terry Fallis. Detailing the run-up to a fictional election, it utilizes a few Canadian stereotypes without turning the show into a cliché. All around it is a delight, both fun and moving, and with a very important message.

Daniel Addison, a speechwriter for the leader of the Liberal Opposition, is dropping out of politics for the relatively tame world of academe. Before Daniel can cast off politics once and for all, he’s given a Herculean task: find a Liberal candidate to run in an unassailable Conservative riding. Daniel convinces Angus McLintock, a crusty old Scot, to let his name stand in an election he’s sure to lose. But their best laid plans go hilariously awry, as Fallis’ unforgettable characters sing us right off the stage and into Canada’s real federal election.

In act one we meet Daniel Addison, played by Nick Fontaine, a speechwriter for the Liberal party who dreams of writing the ‘Great Canadian Novel’, and Angus, the previously described crusty old Scot, who is mourning his deceased wife. Angus is fed up with his job as a professor teaching English to Engineers (“all they can read is their phones!” he says), and Daniel is in a bind, looking for a candidate to run against Eric Cameron, the Conservative Minister of Finance who everyone seems to love. Daniel and Angus agree to help each other out, Angus by running for office (with the terms: no phone calls, no debates, no interviews) and Daniel by taking on Angus’ teaching job.

Both Angus and Daniel assume and hope Angus will lose – but when video of Cameron surfaces in a somewhat compromising position (apparently he enjoys dressing as a baby), the press dub it “Diapergate”, and Daniel’s plan is put to the test. Against all odds, Angus wins the seat, and is quite unhappy about it. 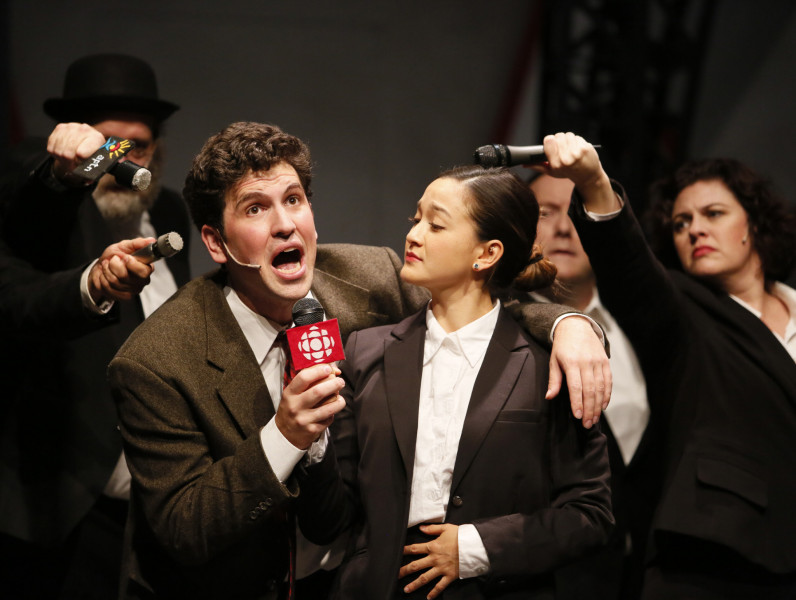 Act two moves quickly. Angus accepts the job reluctantly, and proceeds to speak his mind and challenge his party, raising the ire of his fellow MP’s. However, the people of his riding and all over Canada rally around him. He proceeds to win awards, and quite a few celebrity Canucks (Drake and Celine Dion among them) come together to pay tribute to “Honest Angus” in one of the more rousing numbers of the production.

Patti Allan stuns as the wise-cracking Muriel, who prior to Angus had run multiple times against Cameron and lost. It’s too bad that she only gets one song (the rockin’ “Conservative Blues”) to really show her stuff. Gordon Roberts, as the corrupt Conservative politician Eric Cameron, creates a Rob Ford-esque character that is truly hilarious, especially during his big number “Family Values” where he proceeds to show us that he is more inclined to getting his freak on than being a family man. 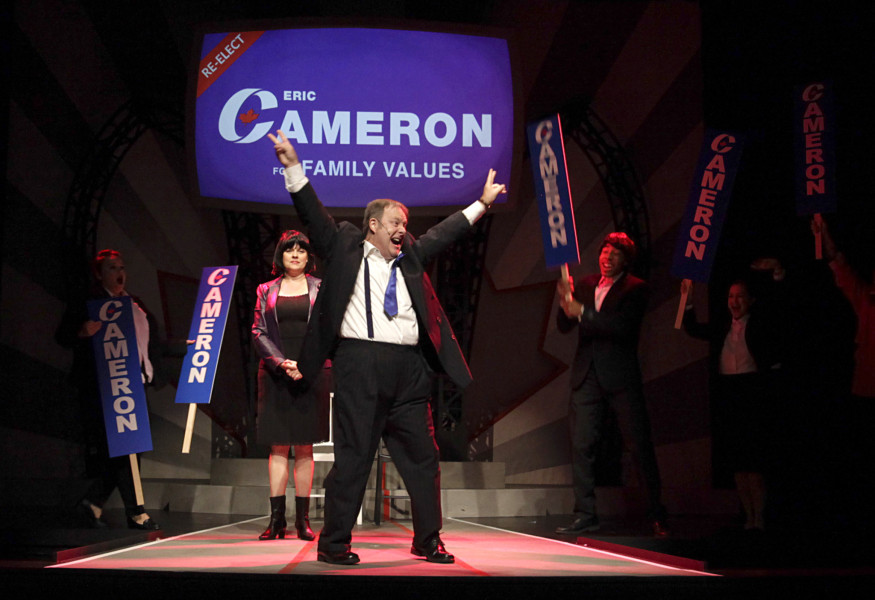 Nick Fontaine as Daniel is a reliable narrator and plays a good straight-man, taking us on a political journey through Ottawa’s parliament. Meaghan Chenosky playing Muriel’s granddaughter and spoken word poet is goofy and down-to-earth. Andrew Wheeler as Angus fulfills every inch of the role, from his aversion to politics to his touching song about his late wife, “The Other Side”. He has created a fully-realized character with Angus.

There are many great moments throughout the show, from “Be What You Are”, Daniel’s duet with a very disturbed bear played by Hal Wesley Rogers, to the trio of Senators, clad in glitzy blazers acting as backup singers, to the big finale with Angus (which I won’t spoil here) that steals the show. 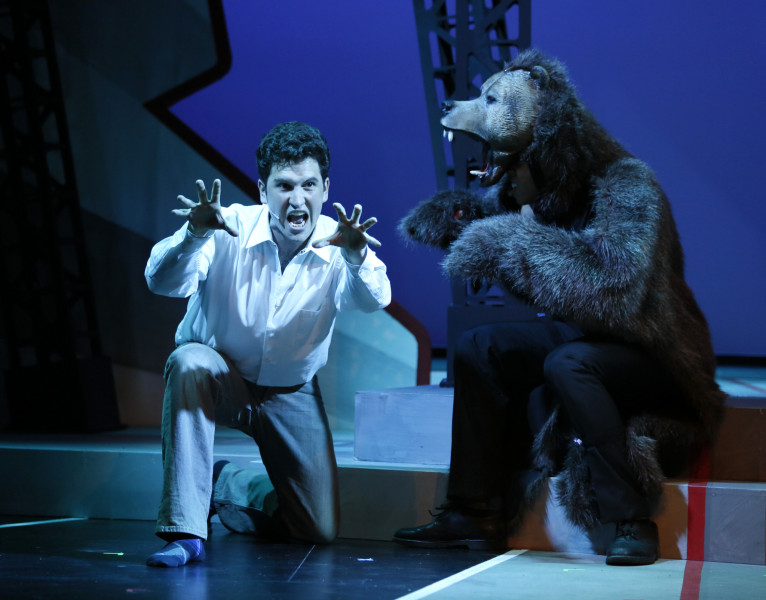 Music & lyrics composers Benjamin Elliott and Anton Lipovetsky have filled the songs with little easter eggs and funny lines. I bet you would have to see the show at least twice to catch them all. Drew Facey has created a brilliant set that looks like it could have been taken out of the CBC Hockey Night In Canada soundstage and plunked down in the York Theatre.

The theme of the show that is driven home is to “Say What You Mean”, and the cast asks us in their final number to “Have Our Say”. It couldn’t come at a better time. With Canada’s federal election right around the corner, all of us need to take a cue from “Honest Angus” and stand up for what we believe in (and ask the same of our politicians).

The Best Laid Plans: a Musical runs from September 19th to October 3rd, 2015 at The York Theatre (639 Commercial Drive). Tickets can be purchased through The Cultch Box Office.