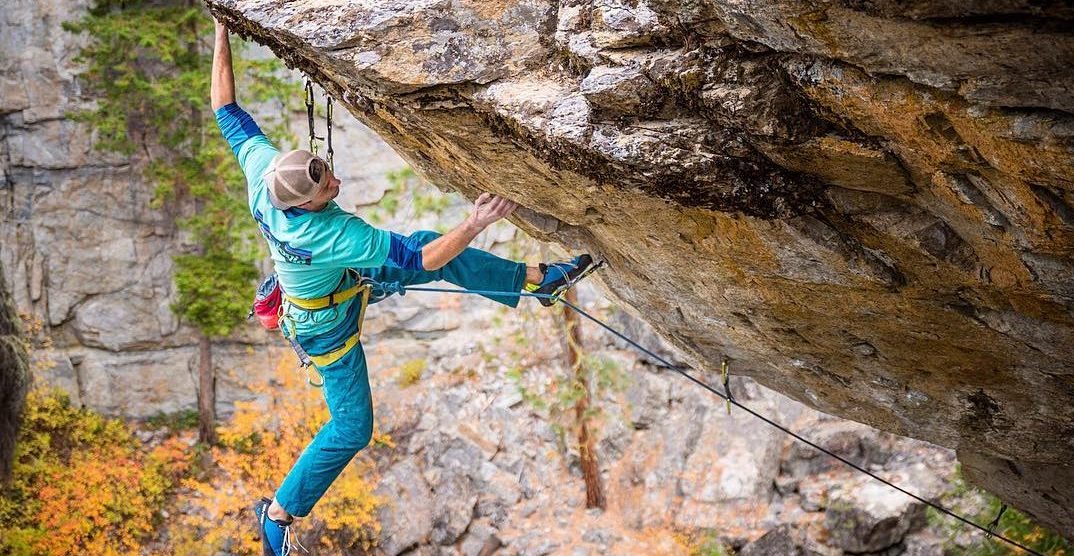 Small disclaimer, half of these “Vancouverites” are probably living out of vans or have some other living arrangement that’s more than a little out-of-the-ordinary.

Whether or not they have a mailing address, these local climbers are a part of the Vancouver/Squamish climbing culture. If you’ve ever hit up an indoor gym or a local crag, you’re going to want to check these people out on Instagram.

They’ll get you motivated to climb on.

I LOVE ROCK CLIMBING!😊 So yesterday was kind of a big day for me. Personally and physically. I managed to get an excellent weather window, with perfect conditions, and three top shelf belayers to help me summit a long-time dream climb. This 15 pitch route (which I’m calling War Hammer) links up ‘The Moat’ into ‘Castles in the Sky’ into ‘Eisenhower Tower’ has been 5 years in the making, a dozen days of work, and at least 100 bolts. The crux pitch is a pumpy 5.14a which felt better than ever yesterday. So sticky. I am also stoked to see the younger generation up there living the good life and working the route as well. Many, many thanks to @practicewithlydia @brandonpullan @dexterbateman 📷 @s_a_m_t_u_c_k_e_r @climb4sam @sameastman_ and @evgeniikrem who all helped bring this monster to life. Friends in high places are the best. #warhammer

Originally from the flatlands of Ontario, Sonnie remarkably became one of the world’s top climbers. He now spends his time sending it on the hardest routes around Squamish, Vancouver, and Canmore.

It doesn’t get much more instant than this😉 @marceveleigh sticks the final huck on DEW Line 5.11c, Lake Louise, Alberta to a cheering crowd! BAM!!!!

Being simul belayed with my best babe 📷 @outdorphins

Climbing babe and Vancouver local, Alannah spends her days driving to and from Squamish hitting up the crags and chilling with the coolest crew of Squamish residents.

A Quebecois climber currently living the #vanlife around west-coast rock walls. When Nelson’s not climbing, he’s usually dangling from ledges and ropes photographing other climber’s ascents.

My 2017 Oktober fest is about german climber, granite and beer! David Zelfner on One of the chief’s famous masterpiece ; high plains drifter 5.11c. Definitly the most challenging photoshoot I have made. Usually when you jumar up a rope you I have time to acclimatize to the exposure. But for that one we had to hike up the chief and then rap the last 15m slab, cross that exposed corner, switch the rap on the face anchor, rap down that hole face, setup my fixed line on the top anchor of the first pitch and then rap into and overhang section just being suspended down, different feeling! Wow what at adventure. That picture was taken at the end of the day on the upper pitch where I just had to sit on my bench hanging on the corner above the void. A nice way to practice trusting your gear and forgetting yourself in within your viewfinder. Shots from the first pitch and the hole project to come. #beautifulbc #squamishbc #britishcolumbia #squamish #climbing #climber #rockclimbing #climbing_is_my_passion #climbing_pictures_of_instagram #climbing_worldwide #doyouclimb #climbingisbliss #liveclimbrepeat #rockandice #grippedmagazine #crackclimbing #tradclimbing #rockclimbing #explorebc #discoverbc #blackdiamond #petzl_official #climbingnation #adventurestartshere #tradisrad

Thomas is mastermind photographer and renowned climber. His feed is a must follow for anyone on the hunt for climbing photography inspiration.

When the rain stops… That friction well be great until it’s too hot half a minute later.

Just your average badass Vancouver couple living and working out of the city and spending every other waking moment touching whatever rock they can get their hands on.

It’s easy to maintain psych in Squamish because there’s world class climbing in every discipline. What’s hard is narrowing your focus when there is an endless amount of granite to be climbed and explored. Although this season has mainly been spent sport climbing I’m psyched that I’ve gotten to round out my resume with more trad climbing! Here’s one from a few weeks ago of me fiddling with some nuts on “Zap Crack” in the Valley of Shaddai (yes, it’s as magical as it sounds) 🔮 • 📷: @kimstagraham.mcg • • @e9canada @climbonsquamish • • #tradisrad #climbon #e9canada #getoutside #deeznuts #climbonsquamish #climbinglife #climbing_pictures_of_instagram #squamish #climbingisbliss #climbinginspiration #climb #timetoclimb #grippedmagazine

Another climbing bum living out of his van and dirtbagging around town. Can be spotted hanging from finger ledges and teeny-tiny crimps with his trustworthy crag dog close by.

Lots of work put into the “Big Show” this season but it’s paying off! I ticked a big one. ☝️ no greater feeling than completing a goal you set for yourself and once thought was too ambitious. Stoke is high! 🔥 And there’s still plenty of good ‘ole Squamy granite to be climbed this season! 📷: @id_climb_that of me on “Pulse” earlier this season ✌🏼 • • • #climbonsquamish #e9canada #climbinginspiration #climbon #squamish #climbing_is_my_passion #grippedmagazine #climbinglife #climbing #psyched #climbing_pictures_of_instagram #timetoclimb #getoutside #knowyourroutes

There’s a link in my profile to a stellar @arcteryx blog post about how you can chime in to help save Bears Ears National Monument. #celebratewild #standwithbearsears @sonnietrotter 📷 of a gorgeous Indian Creek sunset back in 2011.

ACMG Rock Guide and local legend, Will’s feed is full of hilarious captions and down-to-earth photos any climber can relate to.

At the Vancouver Airport about to head to Bohuslan Sweden for some techy granite trad action with a great crew. Slider nuts, double ropes and even sky hooks !😬 have been packed. 📷 by photo ninja @bearcam the last time we hung tough, on the sea cliffs of Tasmania. @mattsegal @thecharlielong @arcteryx @fiveten_official @maximropes @metoliusclimbing

Vancouver-based climber and hiker making his way through the Squamish Select and Vancouver Climbing books one route at a time.

My one and only FA in the Squamish boulders. V0- #offwidth #whatthefuckisgoingon

A legend both in climbing and skiing. Marc-Andre knows how to push his physical limits and take BC climbing to the next level.

Who can guess where this was taken? Looks Scottish, but it’s on the 4th peak of Slesse. Conditions were interesting to say the least, and we were rapidly thwarted by a maelstrom of spindrift on the first objective. The 3rd and 4th peaks made for quick objectives after unsettled weather. The north cascades are really a unique and special place to climb in during winter. #arcteryx #lyofood #sharechilliwack

If there’s one thing Matthew’s good at (besides climbing of course), it’s crag camping like a pro. He’s got the whole setup nailed: decked out van, inflatable couches, and an all-star, off-the-grid coffee system that’s small enough to be carried on any approach.