Got an urge for a sweet treat? Satisfy your craving with a cinnamon roll (also referred to as a cinnamon bun or even a cinnamon scroll depending on where you hail from). Sweet, sticky, and utterly delicious, these creations of doughy goodness are sure to hit the spot, especially if you’re searching for a mid-afternoon pick-me-up.

From the irresistible cream cheese frosted buns at Small Victory, to the warm and comforting buns at Grounds for Coffee, here’s a list on where to find the best cinnamon rolls in Vancouver. 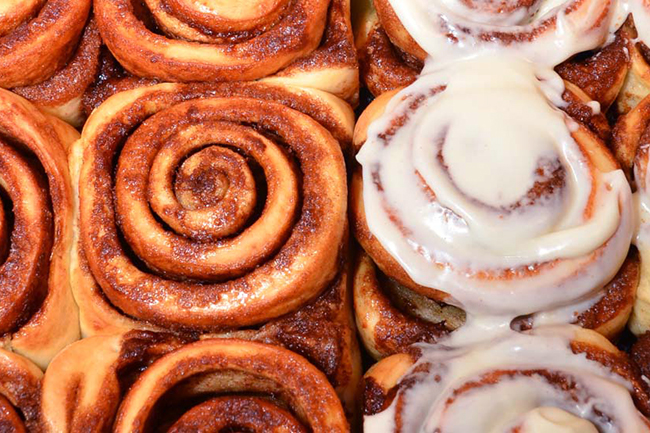 The cinnamon roll of your dreams is waiting for you at Grounds for Coffee in Point Grey. The coffeeshop/bakery has been baking handmade cinnamon rolls daily since 1993. Baked fresh throughout the day, these buns are moist, slightly sticky, lined with cinnamon, and are free from hydrogenated oils, trans-fats, nuts, raisins, bleached flour, eggs, shortening, or preservatives. 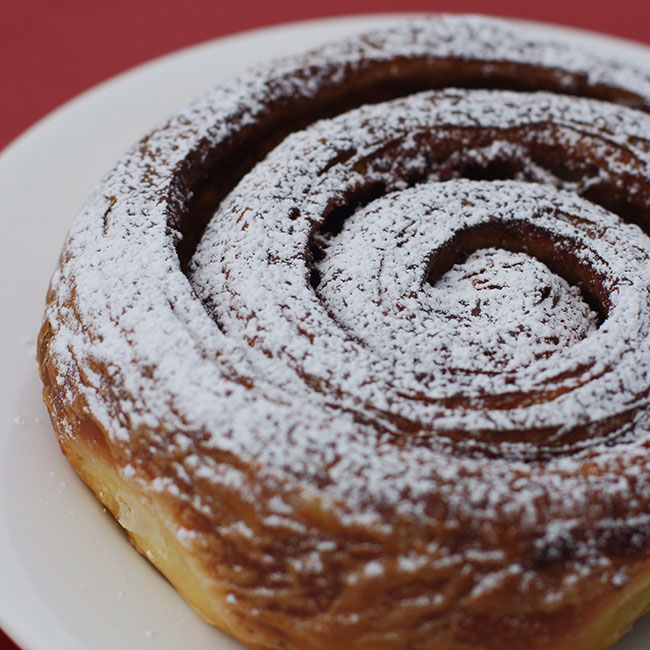 This French-inspired bakery does sweet pastries, artistic cakes, seasonal tarts, and rich Viennoiserie exceptionally well. Their “Cinnamon Scroll” ($3.50) is the most divine mix of croissant dough rolled with rich cinnamon butter. It is baked to gooey sticky goodness and then lightly dusted with powdered sugar.

Better known for their home-baked pies, Tartine Breads and Pies also prepares artisan breads, muffins, tarts, and pastries, including scrumptious cinnamon rolls. They’re made with a white bread base, a delicious homemade cinnamon glaze (a heavenly mixture of cinnamon, caramel, and vanilla), and raisons. Freshly baked these tasty treats are then topped with swirls of cream cheese frosting. 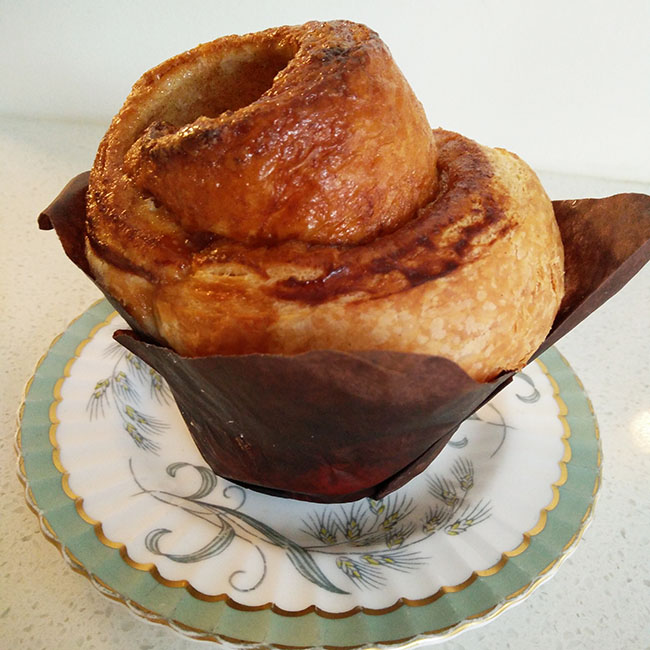 Beautifully crafted baked goods are what patrons can expect to find when they drop by this Powell Street bakeshop. Think all-butter croissants, lemon meringues, rich dark chocolate brownies, and a “Cinnamon Swirl” that will have you coming back time and time again. Made with croissant dough, brown sugar, cinnamon, and a dollop of toffee sauce, the texture of Cadeaux’s Cinnamon Swirl is crusty, flaky, and gooey all in one. 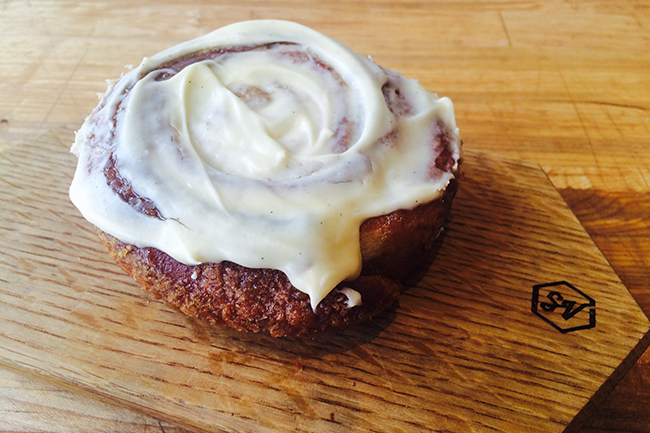 Alongside freshly baked loaves and sandwiches, Small Victory Bakery offers a range of sweet treats all made-on-site in the bakery’s open kitchen. Presented neatly behind a glass display case, these tempting delights include chocolate-filled croissants, scones, tarts, muffins, cookies, and a buttery brioche cinnamon roll. Adorned with a generous serving of cream cheese frosting these buns are the perfect mixture of crumbly, buttery, and cinnamon-y. 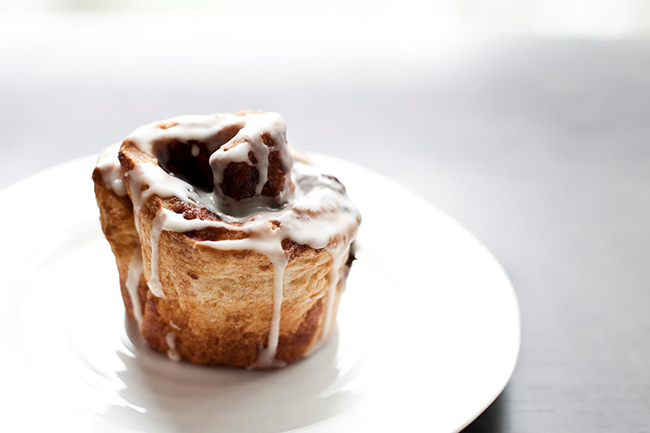 The cinnamon rolls at Vancouver’s original vegan bakery fly off the shelves, especially on Saturdays when the bakehouse has to bake many batches throughout the day to keep up with the demand. Regular cinnamon rolls, which are egg and dairy-free, are made from organic flour, Earth Balance vegan butter, baking powder, rice milk, organic cane sugar, and cinnamon. They’re glazed with a powdered sugar and rice milk mixture, and are notably fluffy (despite the lack of yeast). Occasionally the bakery offers a fresh raspberry version. A gluten-free variety is also available. 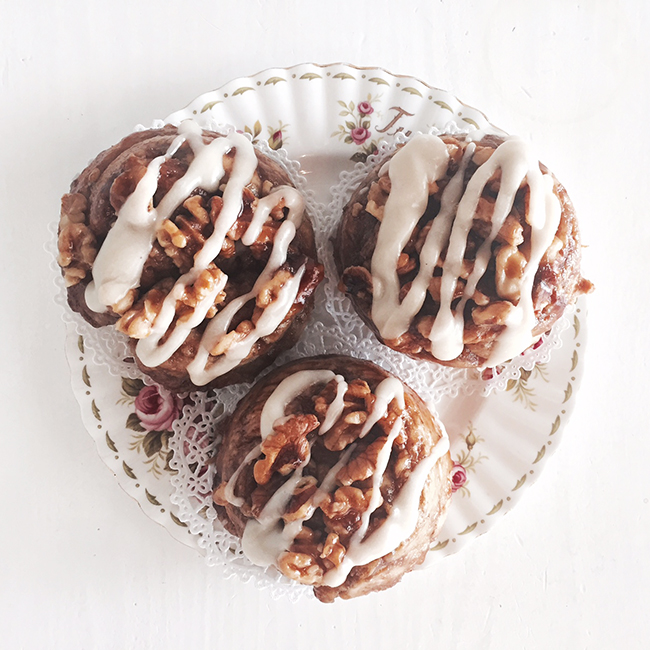 All the baking at this Mount Pleasant bakeshop is done by hand in a 100 per cent gluten-free environment, with the highest quality ingredients available locally. The Gluten Free Epicurean sells vegan cinnamon buns (made with a brown rice arrowroot and chia based dough), topped with a house-made vegan cream cheese icing, which are always a popular choice. On Wednesdays the bakery offers special lemon blueberry cinnamon buns. 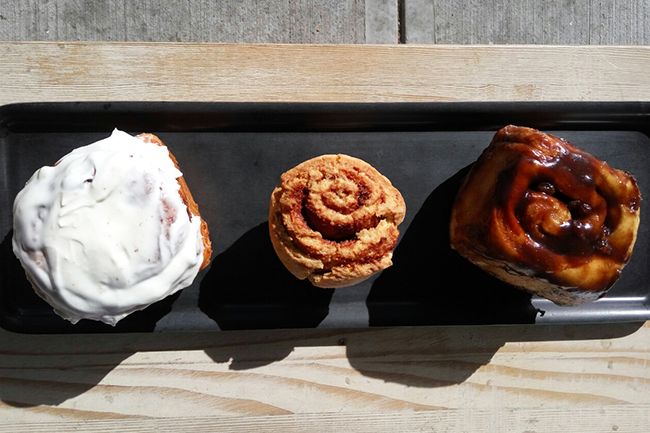 Swiss Bakery might be known for their Frissants (a fritter and croissant hybrid) but it also whips up a moreish Classic Cinnamon Bun topped with cream cheese icing. Also available, a Sticky Bun, which has a brown sugar caramel glaze finish. Both of these buns are made from a sweet dough, which has a cinnamon filling and is studded with raisins. The Mount Pleasant bakery also offers a Cinnamon Roll, an option that does not contain raisins. With a soft and crumbly texture, this treat falls somewhere between a cookie and a muffin.

This gluten-free and vegan-friendly bakeshop and café in Gastown offers sweet-sticky glazed cinnamon buns. The flour mix is comprised of tapioca, corn, potato, rice, and sorghum, while the wonderfully gooey topping is composed of maple syrup and brown sugar. The West Hastings shopfront bakes their buns daily and also sells frozen “take and bake” buns. 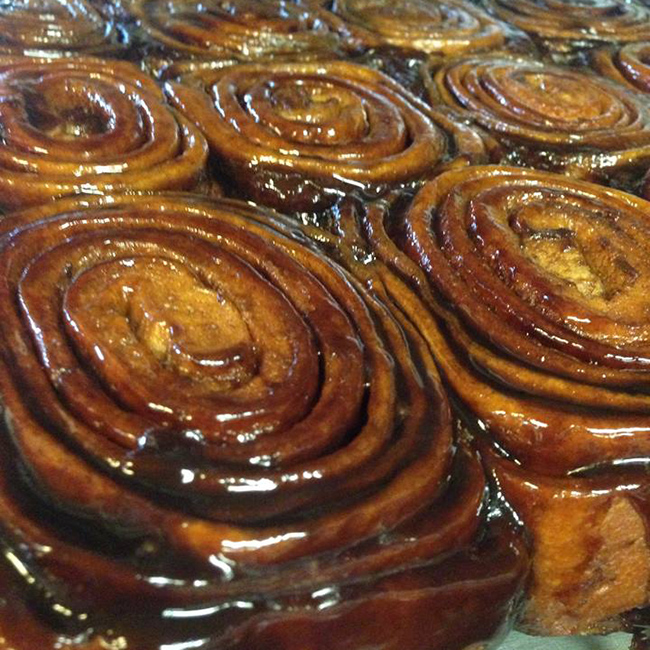