Vancouver may be home to a wide variety of independent eateries all striving for our attention, but it also boasts an array of dining chains, which offer dependable menus and good value for money.

Possessing three or more locations dotted in and around the city and delivering a similar experience in every outpost, check out our picks for Vancouver’s best chain restaurants. 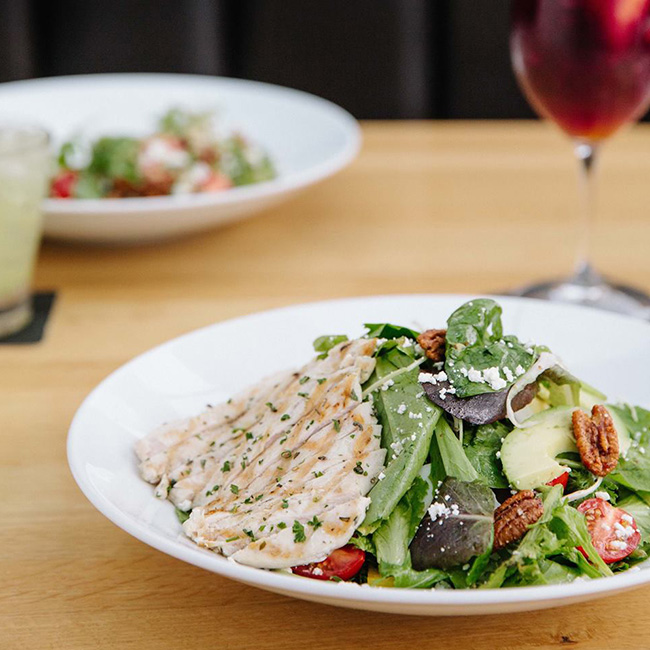 Although Cactus Club eateries are scattered all over the country, the casual-fine dining restaurant, which began life out in North Van, is most definitely a Vancouver foodie fixture.
Despite being in operation since 1988, Cactus Club, still to this day continues to pull a crowd, thanks to the restaurant’s approachable menu, which features globally-inspired fare (ravioli filled with butternut squash and mascarpone, topped with jumbo prawns, truffle butter, pine nuts and crispy sage–yes please!), and relaxed atmosphere. 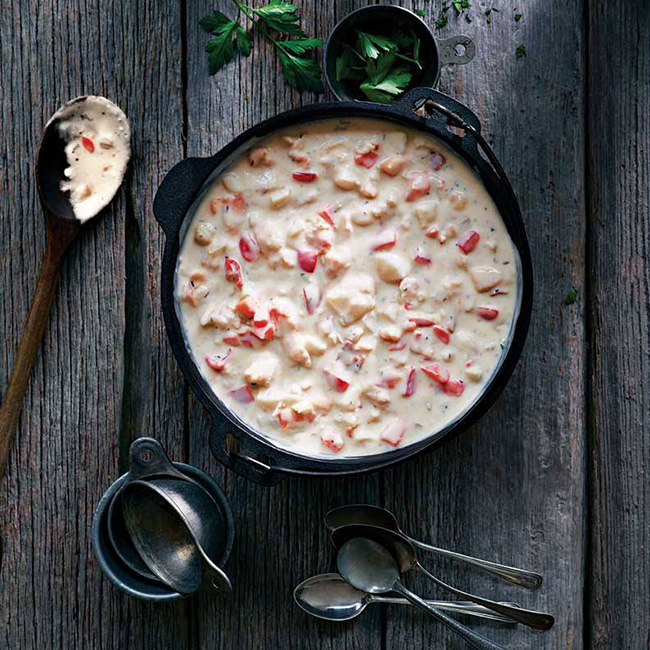 With a number of restaurants in and around the city, one is never too far away from an Earls dinner. The casual sit-down spot consistently delivers a range of solid menu choices. There’s an emphasis on globally-inspired dishes (Tuna Tostadas, Bibimbap, and Mediterranean Linguine) made with seasonal ingredients, as well as good old fashioned comfort fare, think chowder, wings, burgers, and steaks.

The Keg is a well-established chain with locations across Canada and even in the U.S., however its humble roots tie it back to some pretty hefty steak royalty in B.C. In 1971, George Tidball opened The Keg & Cleaver in North Vancouver, and was helped by his friend Hy of Hy’s steakhouse fame. Ultimately The Keg dropped the “Cleaver” (now they’ve adopted Steakhouse + Bar to their moniker) but what hasn’t changed is their commitment to a quality product. No matter what cut of meat you get, just save room for the Billy Miner pie. It’s as fun as you might remember. 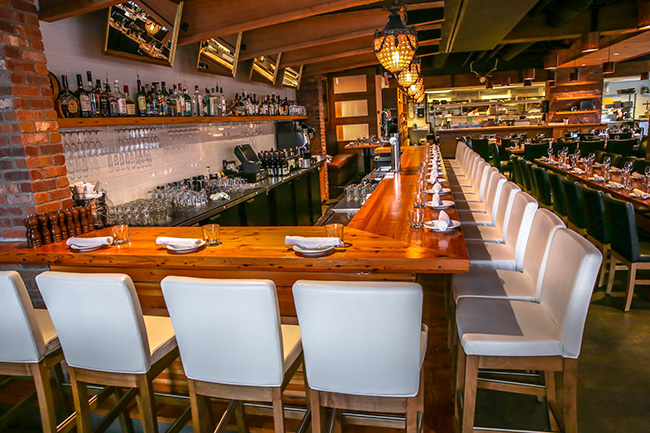 Photo courtesy of The Flying Pig

Each Flying Pig locale boasts a beautifully furnished space, great happy hour specials, and a reliably good menu, which focuses on “nouveau Canadian Bistro” fare. Luckily, with three locations to choose from, Yaletown, Gastown, and the recently opened Olympic Village branch, diners are never too far away from a great Flying Pig feed.

Burgoo opened back in 2001 and currently has four locations in Vancouver, all of which offer the same comforting menu. Patrons who turn up to any of Burgoo’s branches will find a list of enticing casual fare, including plates like mac and cheese, chicken pot pies, tomato soup, gooey cheese grillers, and chunky chicken salads, in addition to a rustic and charming country ambience. 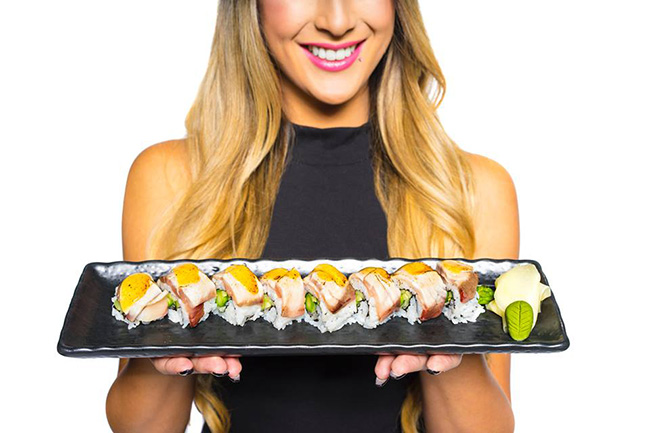 This casual-upscale Japanese small plates-style eatery has been keeping customers satisfied with their offerings since 2003. All three Vancouver-based locations offer a menu comprised of salads, sashimi, cold tapas, and hot tapas, in addition to rice and noodle dishes. From the bar diners will find an array of cocktails, beer, cider, wine, Champagne, sake, shochu (Japanese distilled liquor), and a variety of mocktails.

When it comes to chain burgers, this veteran Vancouver-based restaurant, which opened in the late 1920s, offers a range of appetizing varieties. While White Spot may not necessarily be somewhere you’d go on a first date, the restaurant does provide reliably good fare, as well as offer a highly addictive house-made “Triple O” sauce. 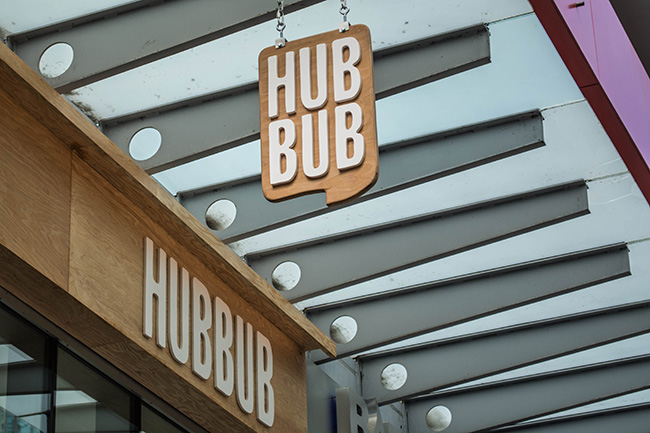 Best known for their quick service and uncomplicated menu, featuring hearty sandwiches and salad bowls, Vancouver’s very own Hubbub has become somewhat of a lunchtime staple for many Vancouverites. While the eatery’s two downtown locations sport more of a to-go vibe, the most recent Hubbub addition in Olympic Village offers plenty of seating in a modern, high ceilinged space.

Authentic izakaya food and drink offerings can ben found at the Guu family of restaurants. In addition to their energetic greetings, the Japanese tapas spots are known for their fresh and flavourful small plates, which include spicy calamari, lightly seared tuna sashimi, kobucha croquettes (made with pumpkin and an entire hard-boiled egg), udon bowls, and grilled beef tongue, just to name a few. Hot and cold sake are also featured on the menu. 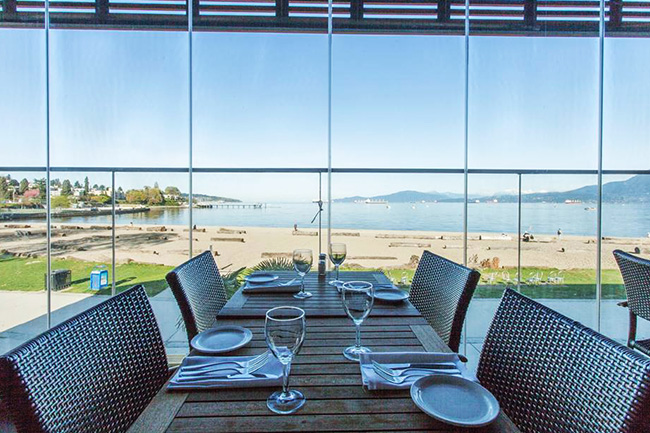 While The Boathouse may not jump out at you as a top dining destination in the city, it does, however, hold sentimental value to a lot of people, plus each restaurant is perched on some pretty amazing real estate. With locations in English Bay, Kitsilano, and White Rock, simply kick back with a drink and enjoy the view.