Beach season is finally here! After several long months of chilly temperatures and wet weather, Vancouver gets its annual dose of summer sun and vitamin D. Being a coastal city, there is no shortage of watering holes to cool down in on a hot day, and even better – they all feature stunning views and great swimming.

While there are dozens of beaches in Metro Vancouver, only a few make our list for best swimming destinations. Water quality, beach entrance and other amenities all contributed to our rankings. Here are the nine best beaches in Vancouver for taking a dip: 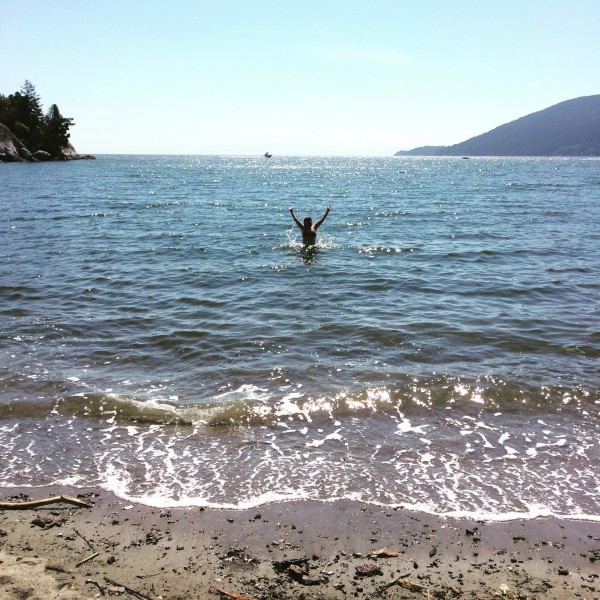 West Vancouver’s Whytecliff Park is just around the point from scenic Horseshoe Bay and offers picturesque views of southern Howe Sound and Bowen Island. The beach is moderately rocky, but small pebbles and sandy patches make up the best portions of the shore. Entrance into the water is smooth during high tide and gets a little rocky at low tide, but the clean and clear water is well worth the extra work.

Whytecliff Park is also one of Vancouver’s most popular scuba diving destinations and is renowned for its numerous sea creatures such as starfish, sea urchins, shells and fish. It is also not uncommon to spot a seal sunbathing or swimming nearby.

There is a moderate-sized parking lot, bathrooms, drinking water and a small concession in the park. 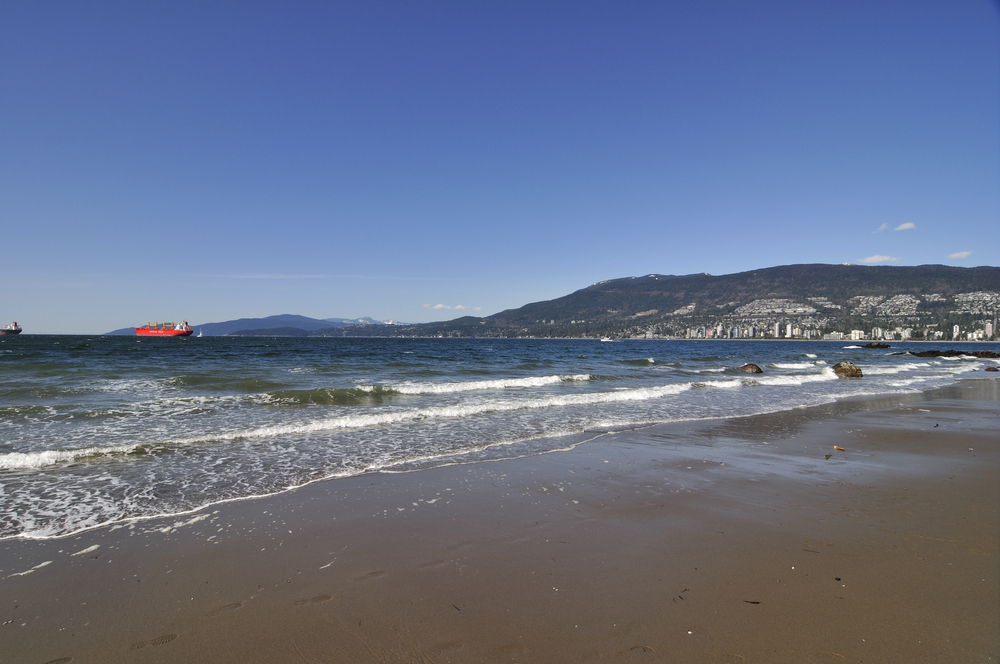 Stanley Park’s Third Beach is the best beach for lounging and swimming in the park, with its expansive stretch of soft sand and easy ocean entry. At low tide, visitors can gradually wade into the water over small tidal pools or enjoy skim boarding across the shallow water. Children also love the sand here for building sand castles.

Water quality at Third Beach is not as clear as some North Shore beaches, but when the water comes in at high tide over warm sand, it can make for some delightful and almost tropical-like swimming. Being in Stanley Park, Third Beach also boasts abundant parking, food and drink stands, bathrooms and change rooms and access to the seawall.

Where: Stanley Park Drive, Vancouver (near the Tea House) 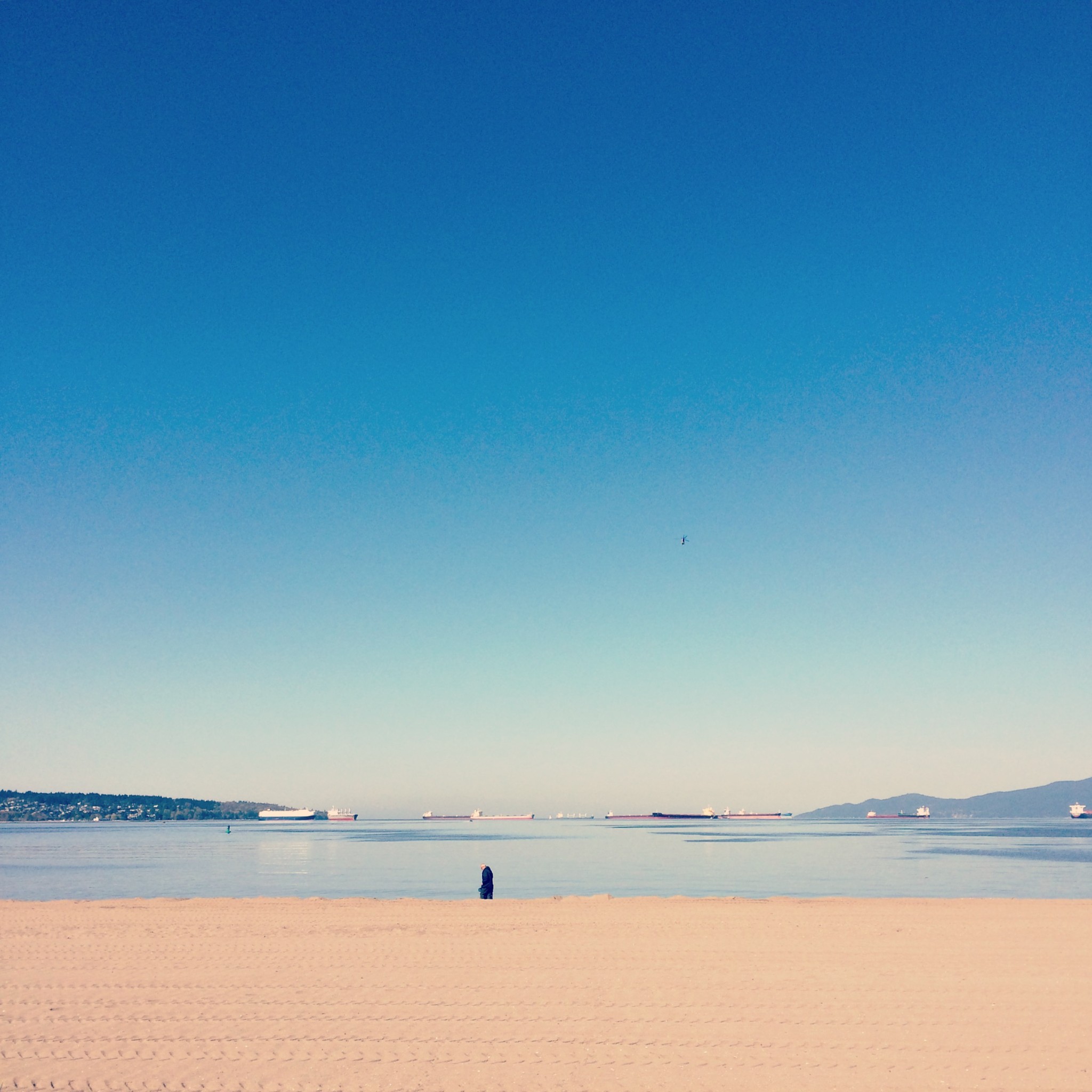 English Bay beach is an easy spot to stop by after work or on the weekends, especially for those looking for a more city-style beach experience. Sandwiched between Denman St. and Davie St., English Bay offers all the food and drink you can imagine, plus a nice sandy beach and smooth water entrance.

Because it is the most popular beach in Downtown Vancouver, including Stanley Park, English Bay is busy even during cooler months, and it attracts a wide variety of peoplem like super-tanned seniors and affectionate young couples. The beach itself doesn’t change too much between high and low tide, offering a sandy entrance into the water all day long. As an added perk, there is also a large slide and swim dock perched just off the beach during the summer.

There isn’t too much parking available near the beach, but it is extremely accessible by foot, bicycle and public transit. The Cactus Club Cafe also boasts a beach-side location that gets insanely busy, but other quick bites are literally only steps away. Bathrooms, change rooms, showers and kayak rentals are also located at the beach. 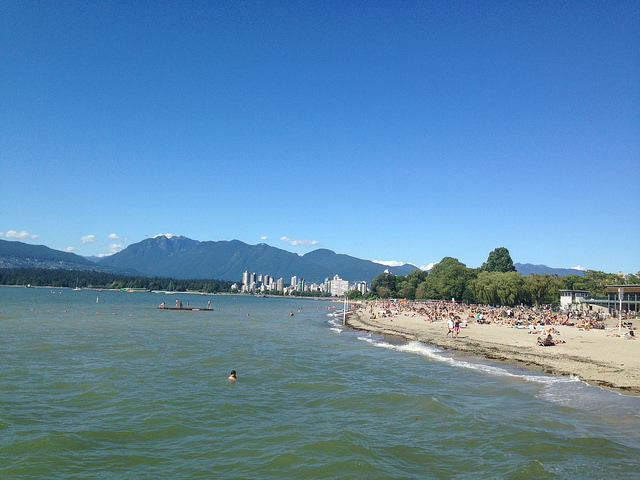 Kitsilano Beach is the place to see and be seen in Vancouver. By joining the crowds of tanned young people, visitors here will get prime people-watching entertainment and some quality beach time. The swimming experience here isn’t the best out of the Vancouver beaches, but there are a few perks, including a swim-out dock during summer months.

On a hot day, Kits is busy well into the evening hours and is a fantastic spot to grab some takeout from nearby Cornwall Ave. or West 4th Ave. and bring it down for a picnic. There are also busy tennis and basketball courts, a playground and tonnes of grassy space for sprawling. The Boathouse Restaurant also sits right on the beach for those looking for a classy way to end their day.

Parking at Kits is pay-parking and limited. Free street parking can be found, if you’re lucky, and willing to walk. The beach also happens to be right on a frequent transit line. 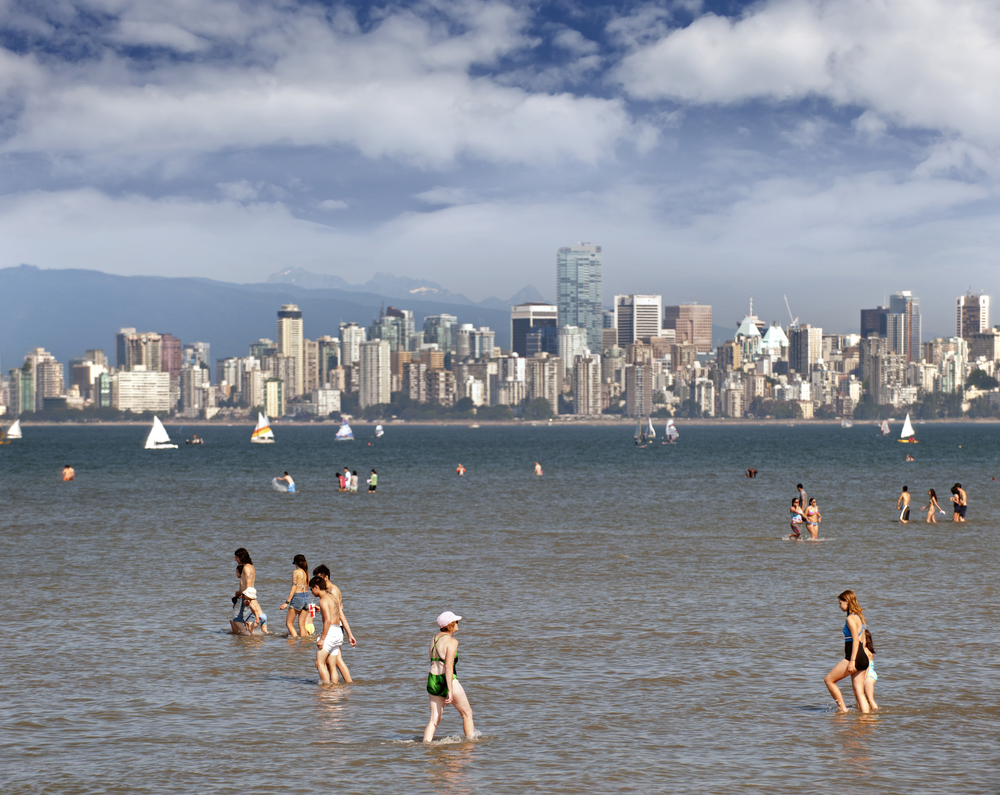 Often confused with Jericho or Locarno Beach, Spanish Banks is in the same strand of sand but off to the west. The quieter end of the beach is farther away from large picnic groups and the volleyball nets, so offers a more tranquil beach experience, if that is what you’re after.

The best time to arrive at Spanish Banks is during the low-tide when visitors can walk out on the expansive flats. Shallow and warm tide pools make fun for kids and skim boarders and the calm ocean entrance will entice even the wimpiest ocean swimmers. The ocean floor is almost 100 per cent sand, but the water can be murky at times as the sand is swept up into the current. Vancouver Coastal Health also ranks Spanish Banks with a relatively low water quality ranking, but it is still very safe for swimming.

Parking on a busy summer day can be tiresome, but if you’re willing to walk, there are forested paths leading down to the beach from the bottom of Blanca St. and Belmont Ave. There are two concessions with a wide variety of meals and snacks as well as bathrooms, showers and change rooms.

Jericho Beach is on the eastern end of the long stretch of beaches along the West Side’s northern coast. Backed by a large grassy park area and recreational hub, this beach is a popular choice for day trips and picnics. The water and beach entrance here is similar to Spanish Banks, but lacks the long tidal flats at low-tide. Instead, visitors can try to spot bunny rabbits in nearby bushes or rent kayaks or paddle boards from the Ecomarine rental shop near Jericho Sailing Centre.

Pay parking is in effect at this park during the summer months, but street parking can also be found around the West 4th area. For food and drink, there is a concession at the beach entrance as well as numerous cafes up on 4th Ave. For a more established dining experience, the Galley Patio and Grill at Jericho Sailing Centre offers delicious beach style food like fish and chips along with unparalleled views. 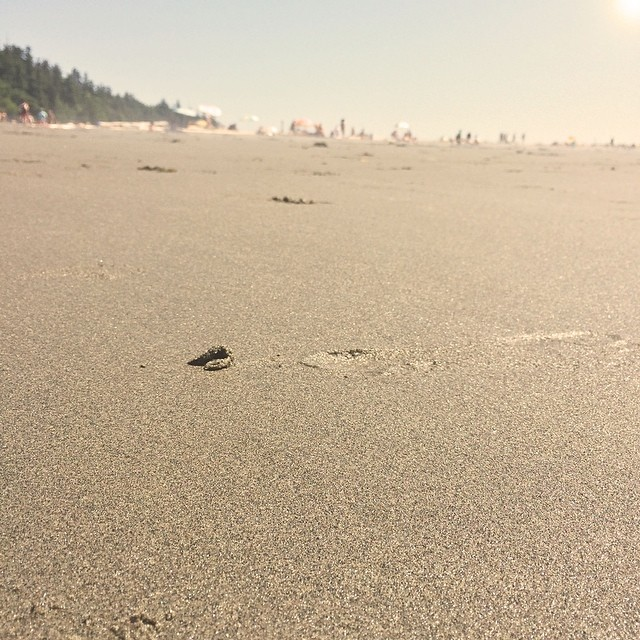 Oh Wreck Beach, what to say about you! For those not in-the-know, Wreck Beach is Vancouver’s only clothing-optional beach, and hence it attracts quite a wide variety of people, from students to hippies and free-wheeling seniors. Besides the distracting views, the beach itself is quite lovely most definitely serene; it is far from any traffic and thus never too busy.

The only problem with Wreck Beach is getting there. Located off the point of Vancouver’s West Side on the University of British Columbia campus, there is no direct car or transit access to the beach. Visitors must park in one of many pay lots on campus and walk down (and then back up again) a steep set of 500 steps. Bicyclists must also park their bikes at the top of the hill.

There isn’t any formal food or drink stand at Wreck, but locals often take it upon themselves to sell “snacks” (maybe pot edibles). 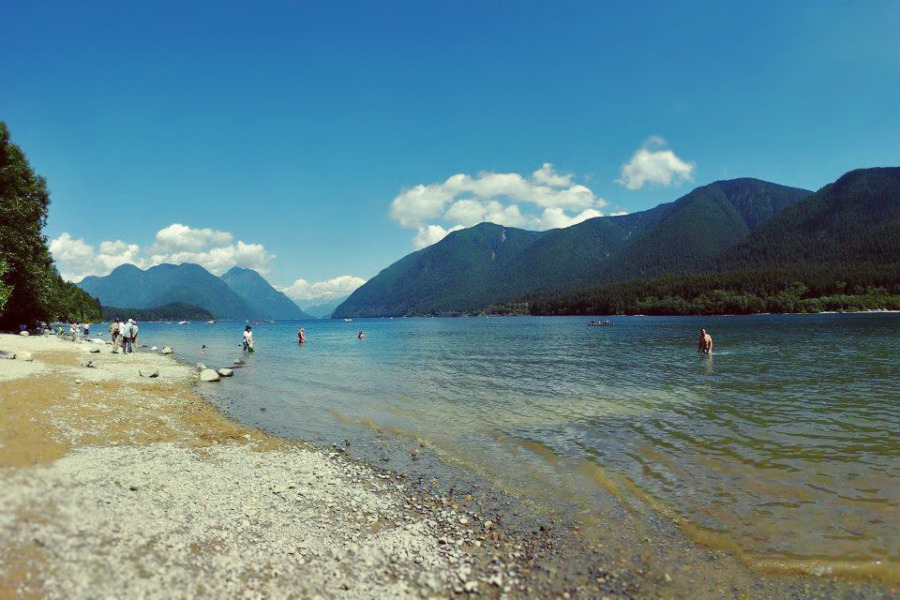 Alouette Lake is located in Maple Ridge’s Golden Ears Provincial Park and so its vistas are something primed for Instagram (#nofilter). The fresh-water lake is amazing for swimming and water sports – if you’re lucky enough to have a boat – because of its warm temperature and flat, sandy bottom.

The most popular beach entrance is the South Beach park located at the bottom end of the lake. Bouys cordon off the swimming zone, but swimming is available everywhere. Just around the corner from the main beach is a smaller stretch of sand perfect for some privacy away from the kids. Up the lake further, just past the campground, is North Beach, another lovely swimming spot.

Parking is abundant at Alouette Lake and is always free. The park can only be accessed by car and is a longer drive for most Metro Vancouver residents, but well worth the extra time.

This beach in Boundary Bay is an excellent destination for families and swimmers of all kind, offering one of the longest tidal flat areas in the region. It’s a rocky beach with shallow water, but there is lots of sand for stretching out and playing on. Grab a snack at the Centennial Beach Cafe – the only place that sells genuine Hawaiian shaved ice – and bring the kids; they’ll love the all-abilities playground and grassy areas. This is a very kid-friendly beach, and there are always lots of parties and families set up on the shore.

If you’re up for it, you can head by foot or bicycle all the way to Mud Bay Park in Surrey by following the Boundary Bay Dyke Trail.

Parking can easily be found and is always free. Showers, bathrooms and change rooms are also on location. Bonus! This beach has some of the cleanest water to swim in Metro Vancouver and is the cleanest on this list.