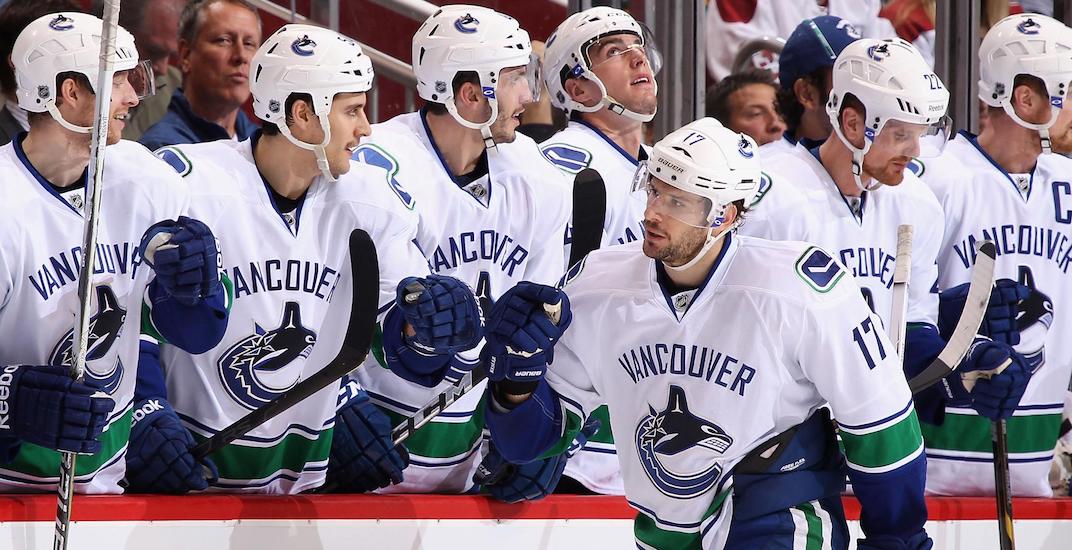 It’s a big day in the United States, making this a perfect time for another classic Daily Hive list!

According to NHL.com, 72 American-born players have suited up for the Vancouver Canucks during their 50-year history. Many of the best US players have called Vancouver home in recent years, with the current team boasting the likes of Quinn Hughes, Brock Boeser, J.T. Miller, Adam Gaudette, Tyler Motte, and Thatcher Demko.

While many of those players will surely be on a list like this one day, we’re going to limit this all-time list to skaters that have played at least 160 games in a Canucks uniform, and goalies that have appeared in at least 80 games.

Though, one current Canuck did make the cut…

Arguably the toughest player in Canucks history, Donald Brashear was one of the best enforcers in the NHL. Born in Bedford, Indiana, Brashear had decent skill for a tough guy. He scored 103 points in 388 games with the Canucks, to go along with 1,159 penalty minutes.

Trent Klatt scored 111 points in 313 games with the Canucks, but we’re giving him extra credit for mentoring the Sedins during their first three seasons. The Robbinsdale, Minnesota native scored some big playoff goals for the Canucks too.

Ranking third on the Canucks’ all-time scoring list among American players, Gerry O’Flaherty had 193 points in 435 games for the franchise in the 1970s. The Pittsburgh native scored 25 goals in 1974-75, helping Vancouver make the playoffs for the first time that season.

Garth Snow was a steadying presence during a tumultuous time in the late 1990s, appearing in 109 games. The Wrentham, Massachusetts product ranked fourth in the league in shutouts in 1998-99.

Ryan Miller also had a difficult environment to deal with in Vancouver, while also replacing Roberto Luongo. Still, the East Lansing, Michigan native posted a solid .914 save percentage in three seasons, appearing in 150 games.

The team’s all-time leader in save percentage (.927), albeit in only 98 games, Marblehead, Massachusetts native Cory Schneider had an outstanding three-year run as a Canuck. Along with Luongo, his name is on the Jennings Trophy for when the Canucks gave up the fewest goals in the league in 2010-11.

A good two-way winger, Chris Higgins was an important addition to the Canucks prior to their run to the Stanley Cup Final in 2011. The Smithtown, New York native would go on to score 161 points in 314 games with the team.

Smooth-skating defenceman Bret Hedican was a late-season addition in 1994, helping the Canucks reach Game 7 of the Stanley Cup Final. No American-born defenceman has more points as a Canuck, as the St. Paul, Minnesota native tallied 102 points in 310 games in Vancouver.

With 205 points in 348 games, Curt Fraser ranks second all-time on the franchise’s all-time scoring list among US-born players. The Cincinnati, Ohio product was a key member of the 1982 Stanley Cup finalist team too.

Ranking fourth on the all-time scoring list among American Canucks, in just 197 games, Brock Boeser has already scored 161 points. The Burnsville, Minnesota product was a runner-up for the Calder Trophy in 2018, and was named All-Star Game MVP the same year.