Trevor Linden and Jim Benning were on TSN 1040 radio this morning, and they answered questions about Eddie Lack, Jacob Markstrom, Bo Horvat, and others.

Bro Jake asked if the Canucks played Markstrom in only the game in Stockton because they were trying to hide him from the rest of the league.

Benning: “I’m not going to hide the fact that we’re happy he’s still in our organization.”

Linden: “We wanted to buy ourselves some time and we were able to do that.”

They didn’t deny the conspiracy theory.

Jake: If Markstrom is exceeding expectation, is it at all possible that Eddie Lack becomes a trade asset?

Benning: “Well, we’re going to monitor Jacob’s play. Rollie’s going to go down and work with him. He’s still a young goalie. If he plays well in the American League and shows us he’s capable of coming up and being a full time backup and giving us a chance to win games, we don’t have to make that decision. So we’re happy he’s still in our organization and we get to keep working with him.”

The most noticeable thing about that answer is he didn’t say no to the idea of trading Lack.

Jake: Just how good do you think Lack can be?

Linden: “Eddie had a breakthrough year last year in a tough situation. He’s got a great mental place that he’s at. Last year when you look at a tough loss, he was able to bounce back. He’s a guy that doesn’t carry baggage with him. He’s a pretty easy going guy, likes to have fun, and he’s got a great attitude.

Pratt asked if Horvat will make the regular season squad:

Benning: “He’s done everything that he could to do make it a tough decision for us, so we’re happy about that.”

Nothing concrete, but it sounds good for Bo.

And here’s your freshly designed Canucks wallpaper for the first month of the new Canucks season.

Dave Lee-son is back with his popular wallpapers this year and they’ve got a kick-ass new design! Click on the link below the image to download the high resolution zip file. 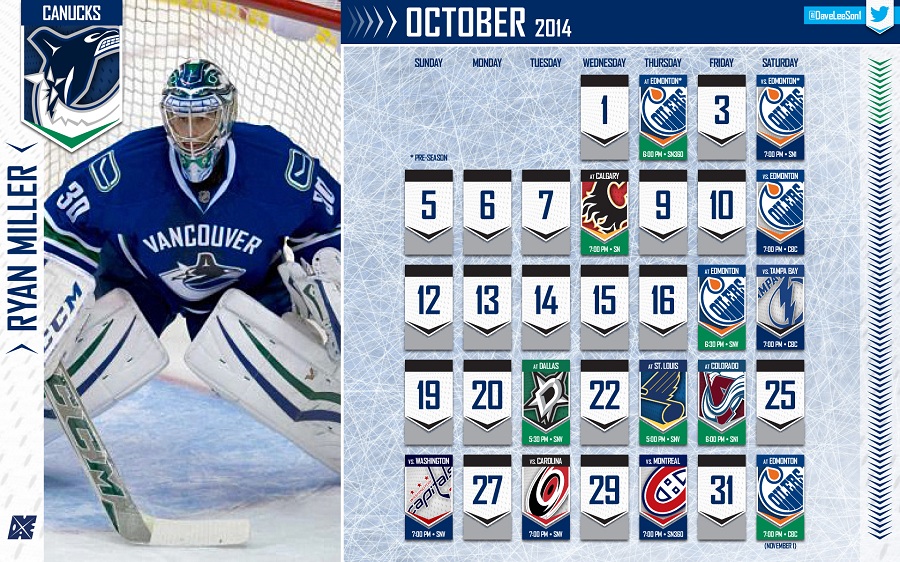