The Canucks’ rebuild did not take any steps forward today.

Like the Skytrain often does, it stalled, leaving a bunch of Vancouverites fuming, tweeting angry things to anyone who’d listen. 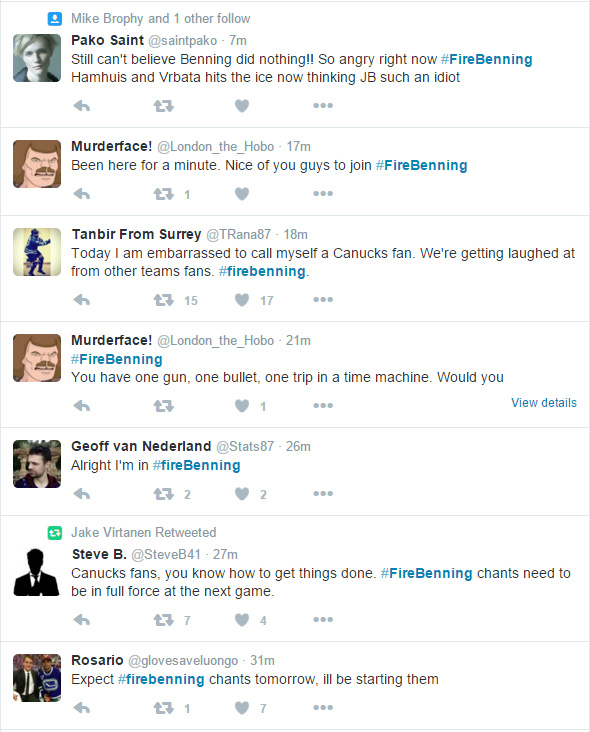 The trade deadline came and went with them making no significant moves.

While this might be fine if the team was in playoff contention, for the first time in years, Vancouver was a clear seller.

Not only did they put seven players on their “everything must go” flyer last week, they were looking to trade two of the biggest pieces on the NHL’s trade block – Radim Vrbata and Dan Hamhuis.

Vrbata was team MVP last year, and Hamhuis is one of the team’s most consistent, all-round defencemen.

Either would’ve helped a contender’s push for the Cup.

On Vrbata, we didn’t hear much.

On Hamhuis, Chicago, Dallas, L.A., Boston, and Washington were all rumoured to have called and kicked the tires.

According to TSN’s Bob McKenzie, Hamhuis wouldn’t have waived for an east-coast team. Still, Vancouver had several options in the west to consider.

Speaking on TSN 1040 after the deadline, Benning said there wasn’t much of a market.

“We started making calls last Monday, Tuesday – we just had a sense it was going to be hard this year,” said Benning.

“There wasn’t a lot of buyers in the market. The good teams didn’t have a lot of cap room to make a lot of moves.”

Did Benning hold out until the last minute in attempts to squeeze out the best deal?

Did he walk away from the table, hoping the offers would get better?

Benning had excuses ready: “There’s gotta be a marketplace for players. I think this year going forward, managers don’t know where the salary caps going to go.

“Unrestricted and restricted players seem to want more money now. The currency to use to improve teams and get better is draft picks and young players.”

Canucks fans might listen to his reasoning if it were true, but a number of trades did manage to get done before Monday’s deadline.

Benning, in the end, ended up with nothing for his key players.

For a team that sent out a season tickets renewal email five days ago, they are as desperate as it gets to inspire hope and acquire young assets.

When TSN 1040 ran a poll question last week asking if fans believe in Benning and Linden, the results were split right down the middle – 50/50.

“We did everything we could to try to recoup draft picks and young players,” said Benning.

“It’s just the marketplace wasn’t there to do it. At the end of the day, it is what it is.”

Are you buying it?