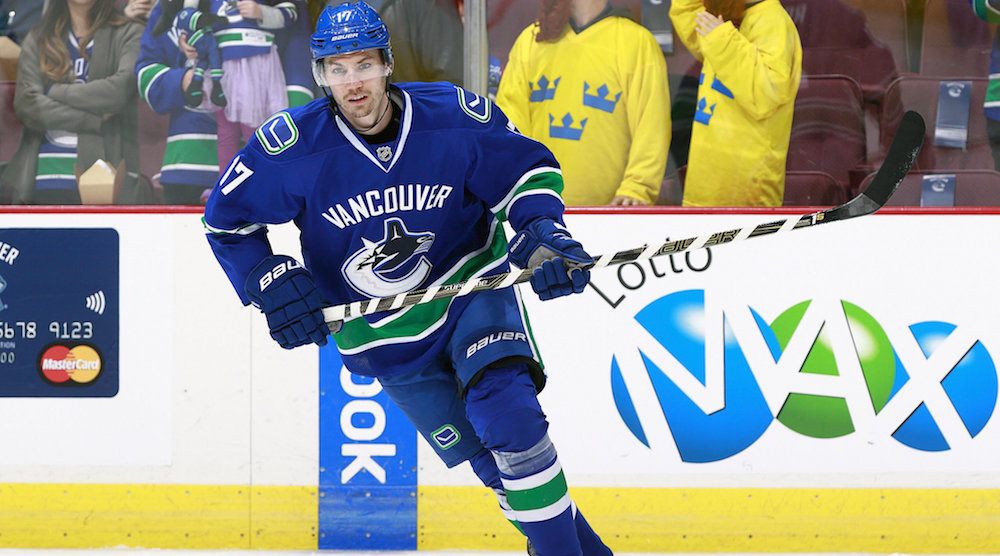 Fans are having trouble figuring out Anton Rodin’s status with the Canucks.

One thing they do know: with Vancouver being one of the lowest scoring teams in the NHL, they’d love to see him play.

They hope Rodin, who led the Swedish Hockey League in scoring last year, could add some excitement and hope to the team’s forward group, where, aside from Bo Horvat, the succession plan for the Sedins is up in the air.

Rodin’s plight became top news this past weekend, when Vancouver dressed Rodin as their 13th forward against Calgary, yet didn’t play him a single shift. Not counting the game in which he was benched, Rodin’s played three games and averaged 8:54 of ice time.

#Canucks update:
Hutton at least a week away

Rodin and Boucher not expected to play vs #Flyers #CanucksOn1040

Rodin won’t be in the lineup on Thursday against the Flyers, either.

“My thing is they want me to put in a guy I’m not sure of,” said Willie Desjardins speaking to the media about Rodin on Monday.

“It’s hard to play a guy when you don’t know exactly where he’s at.”

When the Province’s Ben Kuzma asked if Desjardins meant management when he used “they,” Desjardins replied “I mean everybody.”

Management, AKA Jim Benning, spoke with TSN 1040 on Wednesday, and he confirmed who the “they” is.

“A couple days ago we (Desjardins and I) talked about getting Anton in on a regular line, getting a look at him to see what he can do, and maybe giving him some power play time,” said Benning.

Evidently management would like to see Rodin’s role expanded while Desjardins is making the call not to play him.

Benning did explain that he understands where his coach is coming from: “It’s been a tough situation with Anton with the injury… We’re three months into the season and we’re trying to be competitive for a playoff spot.”

On Monday, Desjardins explained why he feels Rodin’s not ready.

“He came back from Utica on the 23rd or whatever, so he’s had like four or five practices with the team,” said Desjardins.

“Could he be the best player he can be with just that? It’s hard to.”

What they agree on – both want to see Rodin get a regular shot as a top-nine forward so they can see what he’s capable of.

The question is how long  will it be before that happens, and, if you want to take it a step further – how will that happen with the Canucks fighting for their playoff chances and a coach who strongly prefers playing those who’ve earned his trust?

With Jannik Hansen and Derek Dorsett both injured, and Jake Virtanen in the minors, the door should be wide open for a player like Rodin. Add the fact that the likes of Jack Skille, Michael Chaput, Brendan Gaunce, and Jayson Megna are everyday players in the lineup, and it becomes all the more puzzling.

With that in mind, I’ll leave you with the calming words of the GM.

“I told Anton and his agent and everybody involved, let’s be patient, he’s going to get a chance,” said Benning.

If you’re having trouble waiting, you can repeat those words to yourself as you try to sleep tonight.