Oh my god, you guys!

You’re probably already quite familiar with the 2001 film version of Legally Blonde, starring Reese Witherspoon. Well, this is a musical based on that film, and boy is it fun.

We’re introduced to Elle Woods, who, it would seem, was born with the proverbial silver spoon in her mouth. From a wealthy family in Malibu (“Richard Simmons is our next-door neighbour!”), the beautiful and blonde Elle is president of her sorority (“Delta Nu!”), has a 4.0 GPA (in fashion merchandising, natch), and is about to get engaged to the love of her life, Warner Huntington III (“they’re such a perfect couple!”). “Wow, that a man chose you/ Your life begins today!” 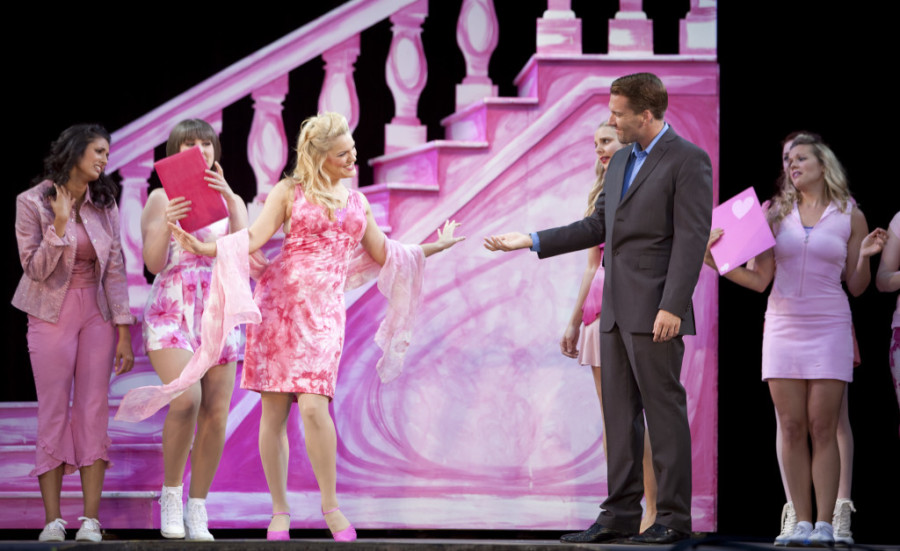 Yep, everything’s going according to Elle’s life plan until Warner breaks up with her instead of proposing. She’s not, you see, “serious” enough. She is not “someone who wears black, even when somebody hasn’t died.”

Elle is heartbroken, but like any gal who really loves her fella, she decides she’ll fight for her man. She’ll show Warner! She’ll apply for and get into Harvard Law, where he is going in the fall, and go there as well. No problem. It’s just… you know… Harvard Law.

Well, she does it, and she begins to learn things about herself: that life is not just about getting your Mrs. degree, and that you don’t always have to conform to the standards that people set for you in order to be successful. At the end of the day, we’re left with Shakespeare’s words ringing in our ears: “This above all: to thine own self be true/ And it must follow, as the night the day, /Thou canst not then be false to any man.”

These valuable life-lessons, though, are wrapped in a sparkly, pink package. Breanne Arrigo, who plays Elle, leads the charge with her husky voice and her pink high heels (which I was not-so-secretly lusting after). Other stand-out performers for me were Scott Walters, who plays her Harvard mentor-turned-sweetheart, Emmett (full disclosure: I’ve worked with Scott, but OMG you guys, he’s super dreamy!), Cathy Wilmott who plays Paulette, Elle’s new friend and beauty-shop owner, Jacob Woike, the UPS guy, whom she manages to ensnare with ‘Bend and Snap!’, (“he’s like walking porn!”) and Andrea Bailey, who plays Warner’s new fiancè, Vivienne. She didn’t have a lot of solo work in the first act, but when she began singing in the second act, she blew me away. 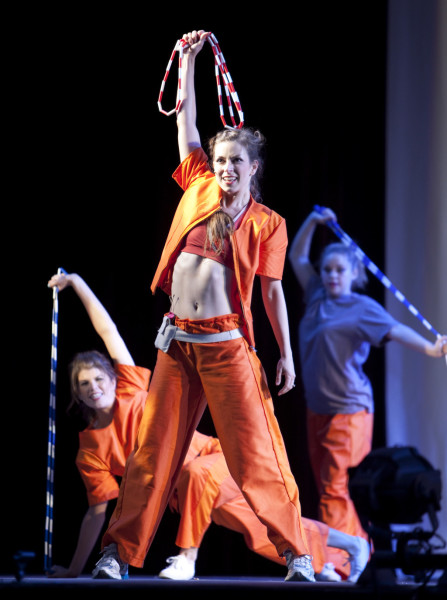 Katie Murphy as Brooke. OMG, you guys! Those abs! Photo by Tim Matheson

The songs are pure fun, although the second act is definitely stronger. It launches with “Whip It,” in which Katie Murphy deserves mad props for doing a dance/fitness routine that would make a hardcore crossfitter cry, all while singing, and appearing to not be even remotely out of breath. “Gay or European” was a blast, and “Take It Like a Man,” where Elle teaches Emmett how to shop, was one of my favourite scenes in the show. 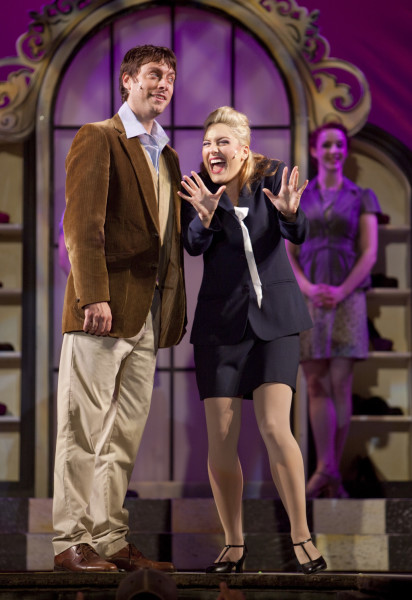 Theatre Under The Stars is a Vancouver institution, doing musical at the Malkin Bowl in Stanley Park for 67 years. The setting is sublime. It’s the perfect date-night outing (bring your own picnic), or a great option for showing off if you have family or friends visiting from out of town.

It’s important not to judge a book by its cover, we learn from Legally Blonde, but this is a musical that is beautiful both inside and out.

Legally Blonde plays alternating nights with How to Succeed in Business Without Really Trying at Theatre Under the Stars at the Malkin Bowl in Stanley Park through until August 17. Tickets range from $24-34, and are available at tuts.ca.