The TELUS city block in downtown Vancouver has been a busy hive of construction for nearly the past two years, but a major component of the project is now nearing completion.

The 22-storey TELUS Garden office tower topped out earlier this spring and when we visited the site, workers had begun the next arduous process of rough-in interior installation and weather tightening the building.

This process was delayed when highly customized triple-glazed window panels for the building’s facade, imported from South Korea, were locked behind Port Metro Vancouver’s storage yards due to the prolonged truckers’ strike earlier this year.

However, contractors have kept up with the pace required to meet the move-in schedules of TELUS’ and other tenants that include Amazon and Bull Housser. TELUS employees will move into the building later this year, and by next year approximately 70 per cent of the company’s headquarters workforce in Vancouver will either work outside of their offices or in the office on a part-time basis.

When complete, it will be one of the city’s most desirable working spaces with its higher than average ceiling heights and raised floor system which uniquely draws 100 per cent fresh air. Studies have shown that improving the indoor air quality of a workspace can increase employee productivity.

Outdoor balconies and patios are also amongst the amenities that will be available to TELUS office workers. This includes the patio space on the rooftops of a pair of four-storey ‘sky gardens’ on both the Seymour and Richards Streets sides of the development – protruding boxes cantilevered high above the road that contain lounge space and ‘box within box’ meeting rooms.

Aside from its distinctive architectural features, the tower will be the first office building in Canada to meet a LEED Platinum standard and much of this can be credited to its revolutionary district energy system contained within the building itself. It will capture and redistribute low-grade heat throughout the development and contribute to an 80 per cent reduction in energy demand for heating and cooling.

There will also be a rainwater recycling system for toilet water and plant irrigation, green roofs, a ‘rooftop forest’, solar panels to capture solar energy to power the tower’s exterior lighting, and a sun tracking system that automatically adjusts interior blinds.

Altogether, the office development’s sustainability designs will reduce carbon dioxide emissions by more than one million kilograms annually – the equivalent of planting 400,000 trees ever year.

While TELUS Garden provides a superior working environment with some of the industry’s highest environmental standards, it is also an outward development with its wide incorporation of publicly accessible spaces for the benefit of the community.

A large public plaza identified by public art and a 300-foot long canopy, made from B.C.’s pine beetle wood, will face West Georgia Street and provide the capability to host live music events and performances.

The office lobby is integrated to the plaza and is to feature a custom handcrafted grand piano made by Venice, Italy’s Fazioli Company, an internationally renowned grand piano manufacturer.

The development will also add to Downtown Vancouver’s dining scene with the opening of three major establishments by the Glowball Collection of restaurants. In late-2015, the chain will open a ‘casual market’ restaurant, a cocktail lounge, and a 15,000 square foot flagship restaurant with 300 indoor seats and 150 outdoor patio seats on a portion of the centrepiece public plaza.

In addition, the plaza will provide a publicly accessible point-of-entry into the alleyways of the entire city block – dead space that will be converted into pedestrianized laneways like those found in Melbourne, Australia. The placement of three retail units in the laneways, a unique overhead lantern art installation designed by award-winning Scottish sculptor Martin Boyce is intended to animate the space and make it more inviting.

On the other side of the city block, facing Robson Street, is the construction site of the $750 million project’s 53-storey residential tower. The 428 units at TELUS’ first residential building, an iconic architectural landmark, sold out before the planned formal launch and it too has cutting edge designs within the units and strata as a whole. There will be a 17,000 square foot fitness centre complete with a 25-metre length outdoor pool and each unit will be outfitted with high-end TELUS’ digital services.

The residential tower is scheduled for a late-2015 completion and will be built to a LEED Gold standard.

From the corner of Richards Street and West Georgia, looking at the office lobby. 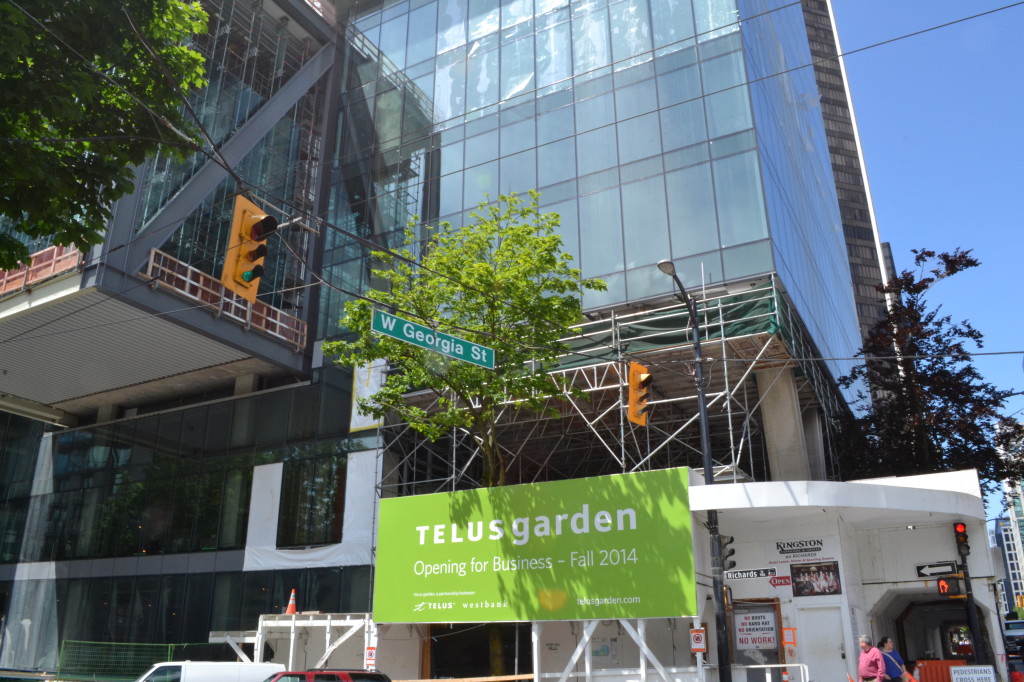 The office lobby, looking west towards the plaza. A wooden canopy will cover the length of the plaza. 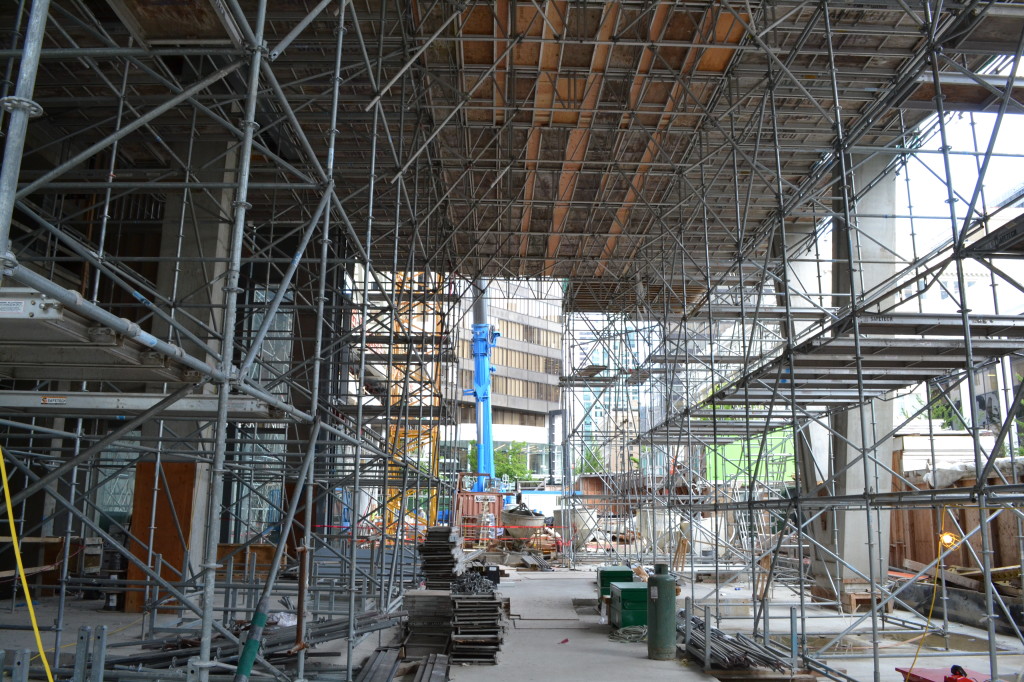 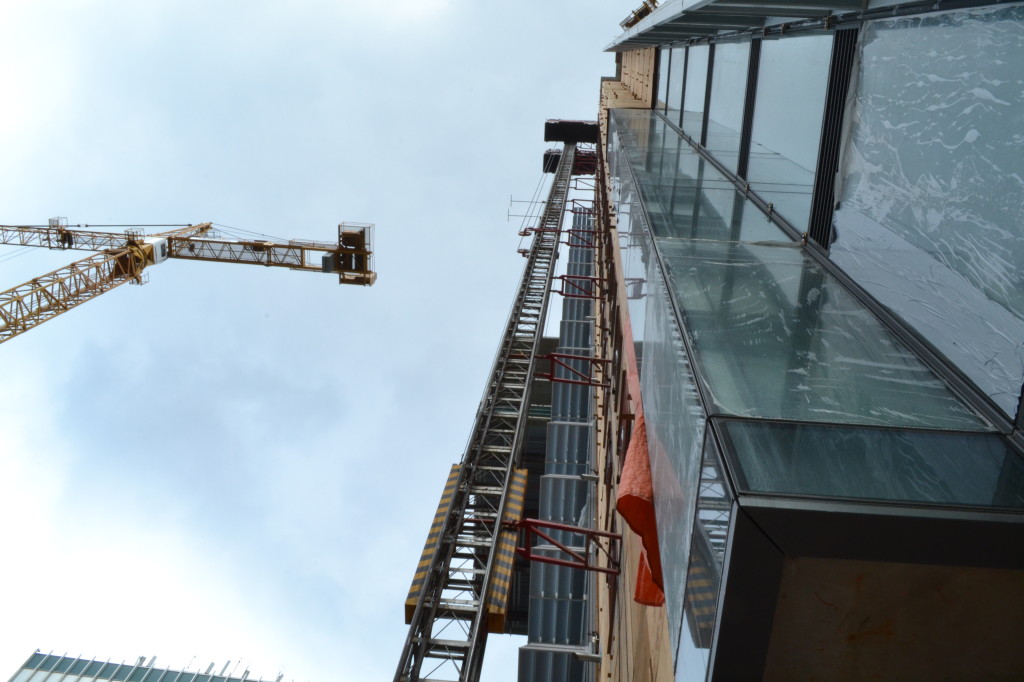 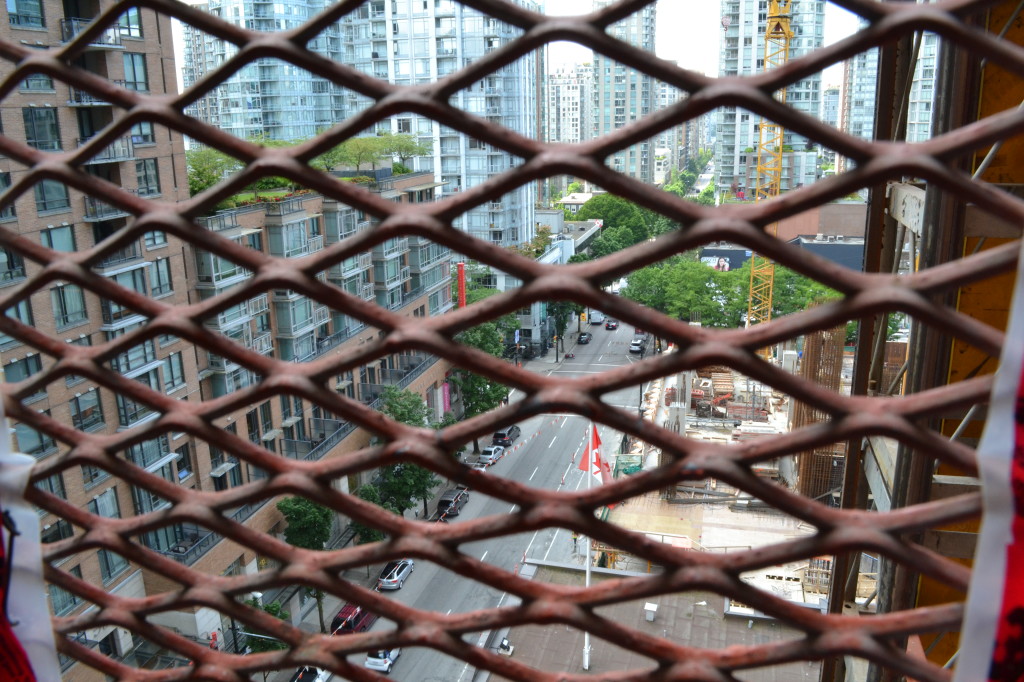 The view from the rooftop patio of the 4-storey sky garden. 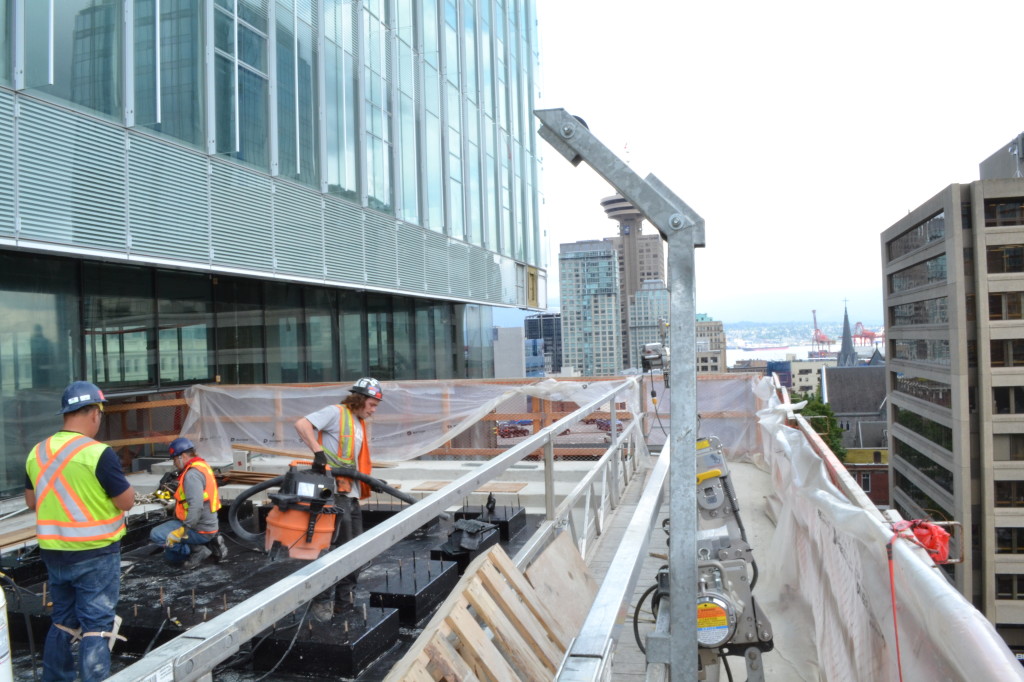 The view of Richards Street from the rooftop patio of the 4-storey sky garden. 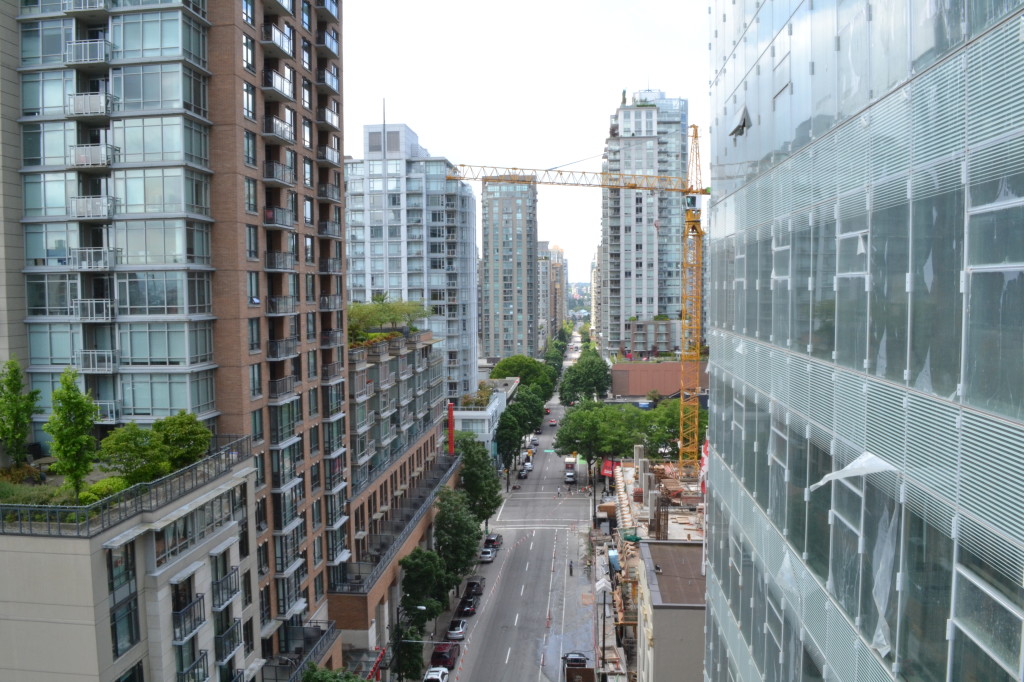 The 12th floor with its raised flooring nearing completion. 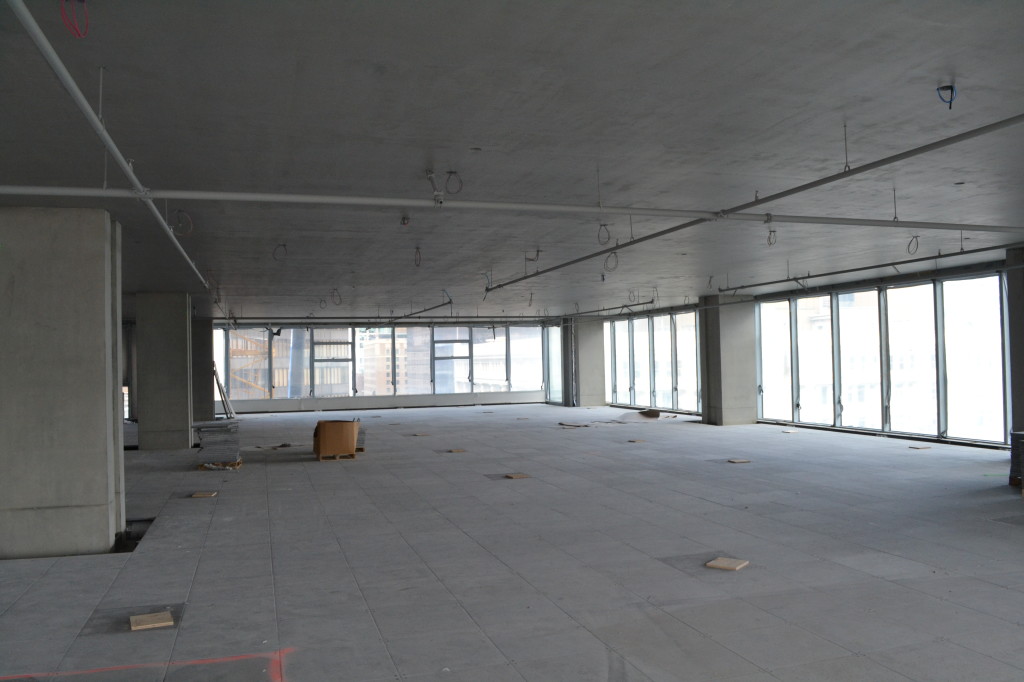 Views west from the 15th floor. 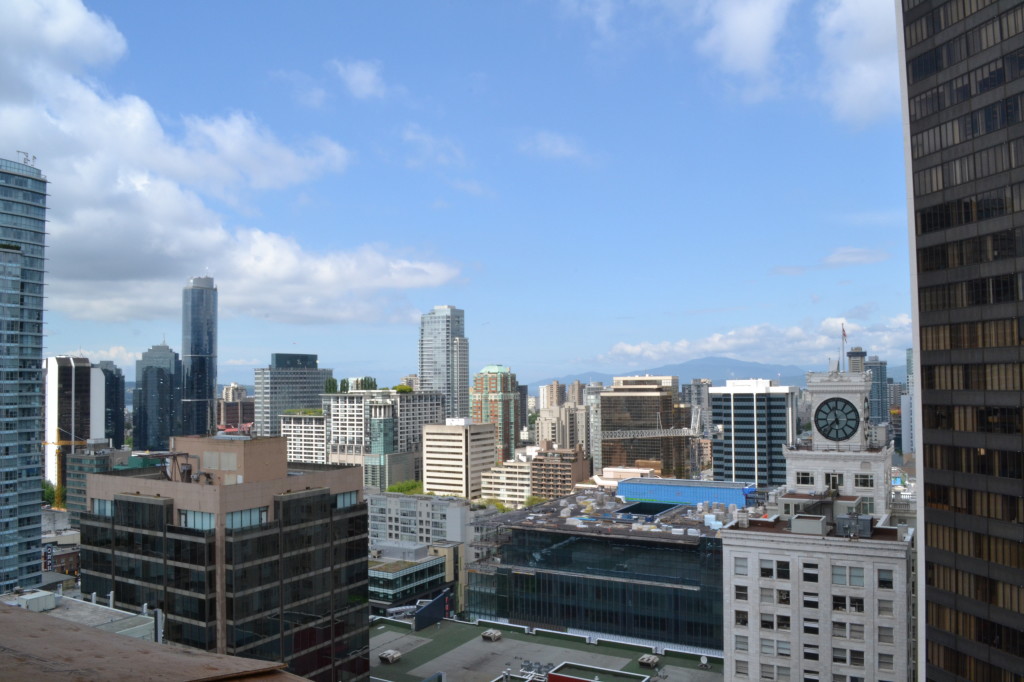 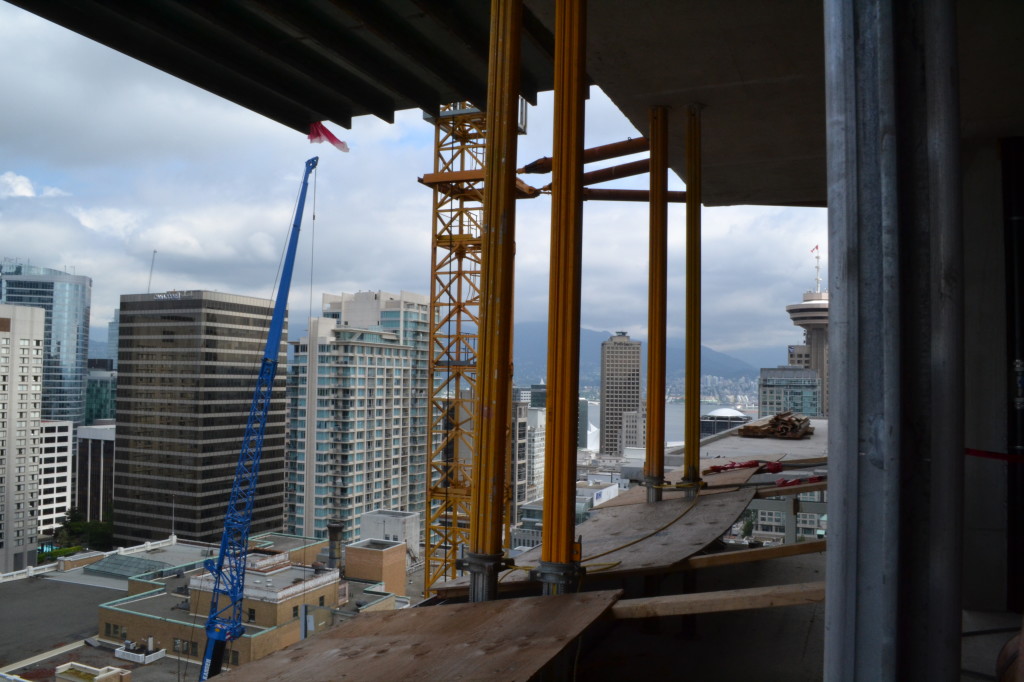 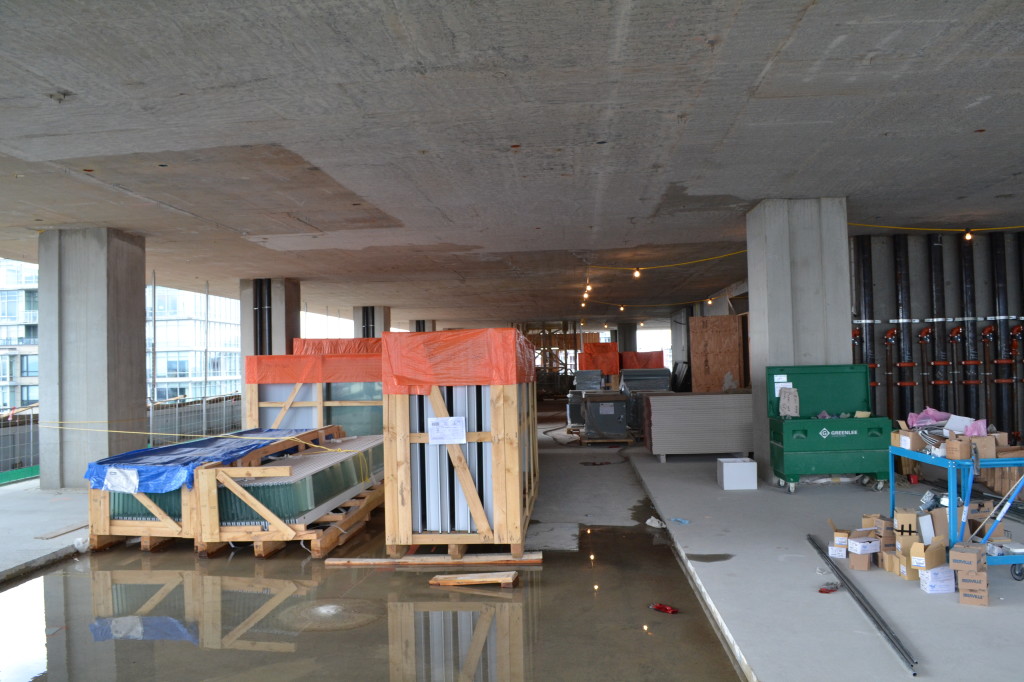 A view of Library Square’s rooftop garden and BC Place Stadium. 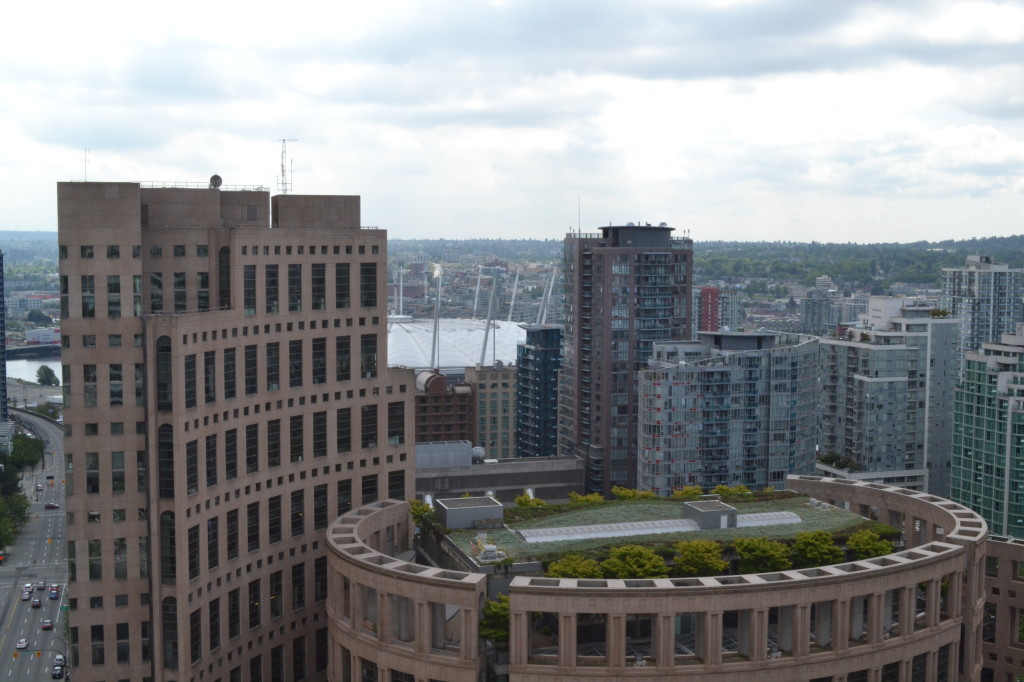