It’s morning, and inside The Juicery Co.‘s North Vancouver storefront and production kitchen, things are humming. Specifically what’s making some noise is a large machine that is turning a large tub of kale leaves into a smaller container of cold pressed juice. The air is almost shockingly fresh-scented, like a dewy garden, minus the dirt. Everyone is smiling. Things at The Juicery’s original shop are, as I’d learn over the next hour or so, definitely worth smiling about.

The seeds of what would grow into The Juicery Co. were planted in 2013, when co-founder Alex Troll threw herself wholeheartedly into making juices to help her grandfather boost his health during cancer treatment. “Dad’s Juice” (named for co-founder and Troll’s mother Christina Prevost’s father) is still on the menu as The Original and is made with Black Kale, Apple, Cucumber, Celery, Parsley, Ginger & Lemon. “Something good came out of something horrible,” says Toll, of her grandfather’s illness, and how her involvement in his well-being during his last months spurned the family’s successful business. 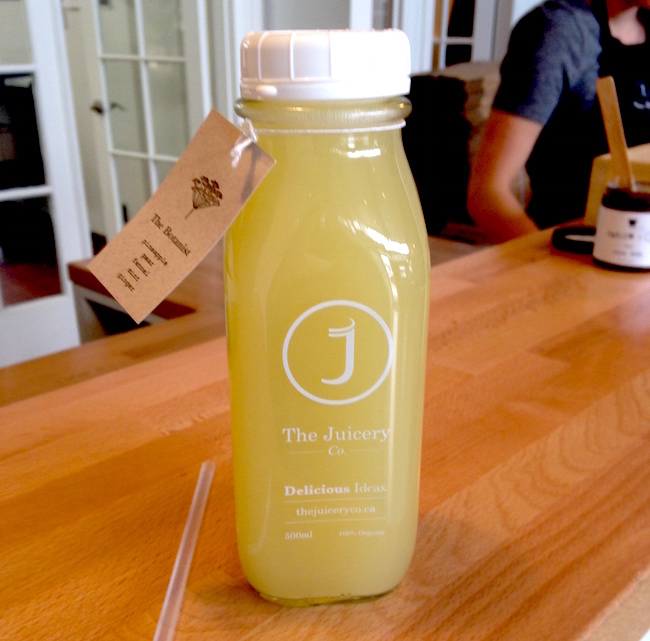 The Botanist by The Juicery Co. (Lindsay William-Ross/Vancity Buzz)

Cold pressed juicing, a rising trend in cities across the globe, has recently taken Vancouver by storm, and The Juicery Co. is among the trendsetters. Troll and Prevost head up what has quickly grown into a little juicing empire; there are three Juicery locations, as well as a robust home-delivery service largely centred on cleanses.

Using all organic produce, The Juicery Co.’s production kitchen makes about 400 bottles of cold pressed juice a day. The produce, sourced from Pro Organics, as well as local farms in season, comes in and doesn’t have any time to get comfy on the shelves; Troll and Production Manager Dusan Indic estimate that veggies and fruits come in whole and leave in juice bottles often within a scant 12-hour time period.

It takes a whopping amount of produce to become one bottle of juice, about two to three pounds per bottle. That giant tub of kale leaves that’s steadily being turned into juice will become just a dozen bottles of liquid.

What begins as boxes of fresh, organic fruits and veggies are prepped and sorted and put into machines, specifically the X-1 commercial juicer (geek out on specs and such here). On the morning I was there, two women were steadily feeding the beasts, and I interrupted one employee long enough to learn that she wasn’t particularly keen on juices or even vegetables when she started her job, but now loves juices, happily goes home smelling of fresh veggies, and is a believer in the Juicery’s philosophy about health. 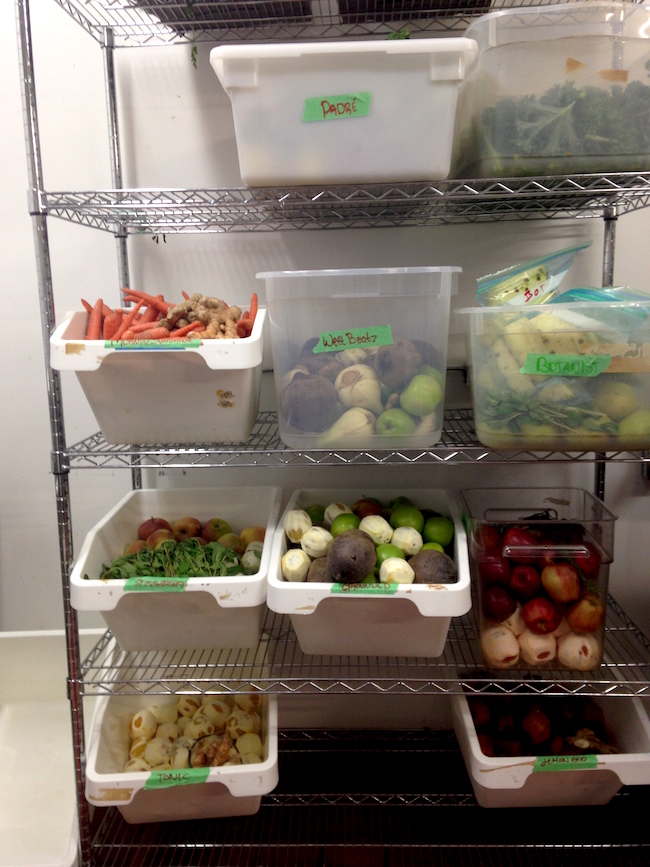 Troll and Indic smilingly toss around the notion that they’re changing the world with what they do, and both of them are quick to point to the radical affect including juicing in their diets has done to their health and well-being. Indic attests that he has freed himself from the grips of knee pain, despite a long workday on his feet, and that he has quit coffee and derives much of his natural energy from drinking juice. Troll also says that she similarly improved her health by turning to juice and healthier snacks, forever changing her appetite for junk food. Both Troll and Indic have ties to the food community; Troll’s family with restaurant operation, and Indic as a professional chef.

The Juicery is also contributing to the betterment of the planet’s health; the pulp and other organic waste generated at the shop (about one tonne every two days) is taken for composting by the city and/or local gardening groups, and the juice is served in re-usable glass bottles. Troll says about 30 per cent of the bottles come back (they have a bottle return loyalty program that lets customers earn juice), but many customers like to hold onto the bottles and reuse them in their own ways. Indic says he’s seen them as anything from water bottles at the gym to flower vases.

Additionally, The Juicery makes fantastic nut milks (or mylks), and takes the no-waste approach a further step with their almond mylk by turning the almond meal into a flour they sell for a mere $5 a bag. Anyone who has shopped for almond flour would recognize the bargain instantly, and as Troll boasts, their organic almond flour has the added bonus of the umami-sweetness of its flavour, since their almond mylk is made with honey, vanilla bean, and a pinch of sea salt. 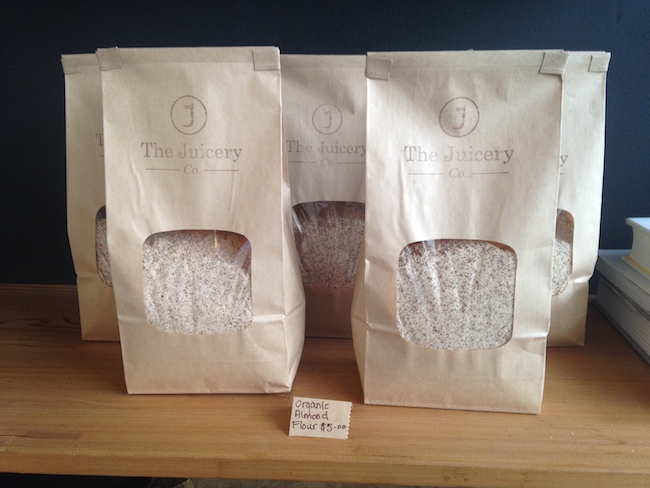 All the recipes are their own creation and were vetted by nutritionists, says Troll, who adds that each Juicery shop includes someone on staff with knowledge of nutrition. Customers interested in pursuing cleanses are welcome to consult Troll and The Juicery for advice on what cleanse would work well for their needs, as well as to address any concerns about the cleanse process.

Cleanses aren’t for anyone, agrees Troll, and juicing in general is ideal as a way to supplement nutrition and boost overall health. In that respect, Troll and Indic and the Juicery crew are optimistic that juicing is not a passing phase, but rather part of the kind of sustainable, healthy lifestyle more and more people are seeking to take part in.

The world of The Juicery Co. remains its epicentre, the North Vancouver storefront and production centre. Customers trickle in the front door to pick up their favourite juices, and the space is often used for events showcasing other local food or flower crafters and healthy practices. It’s a sunny, inviting space, well-suited for sitting and sipping one of their juices or trying one of their menu items, like their “bowls.” Indic assembled the current special for me, a riff on the flavours of a strawberry shortcake, using frozen strawberry shavings, granola, almond mylk, fresh mint, and a spoon of organic honey, and that alone was worth the SeaBus ride to the Lonsdale-area shop. 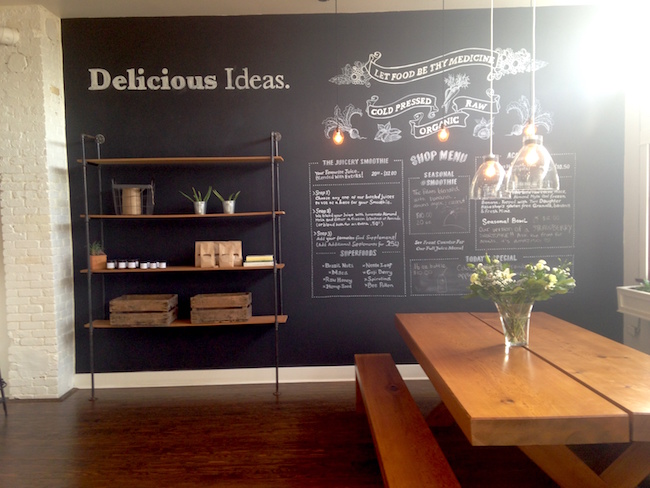 On the ride back to downtown Vancouver, with a cardboard tote of glass Juicery bottles in hand, a woman paused next to me. “Aren’t those just the best juices,” she said enthusiastically. “I’m always at their shop. They’re just so good.”

Not surprisingly, she was smiling, and so was I. 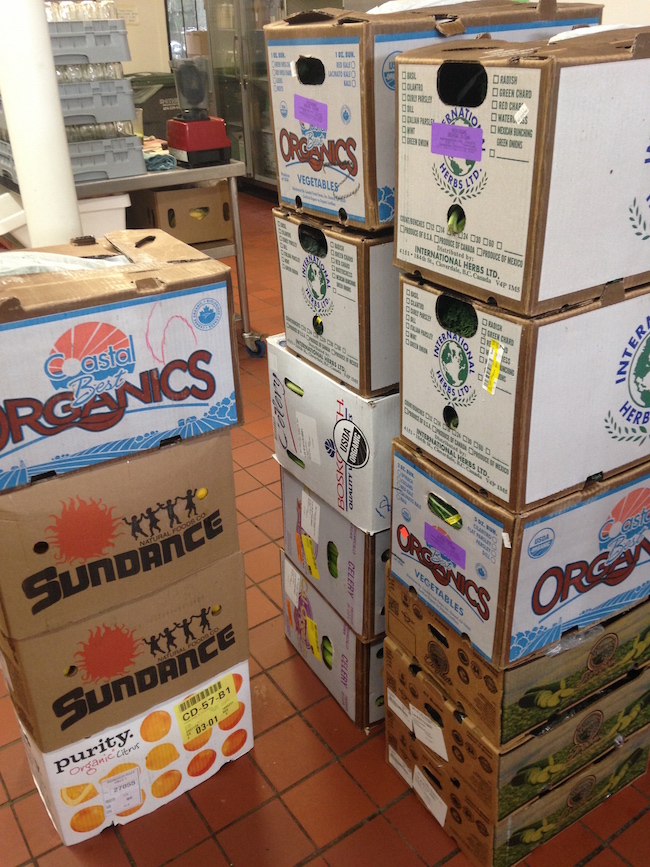 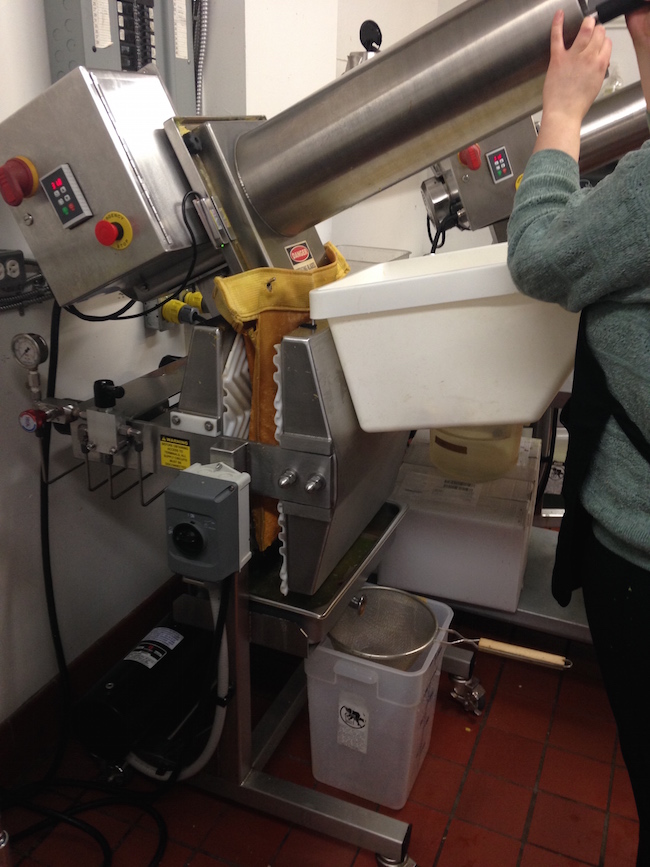 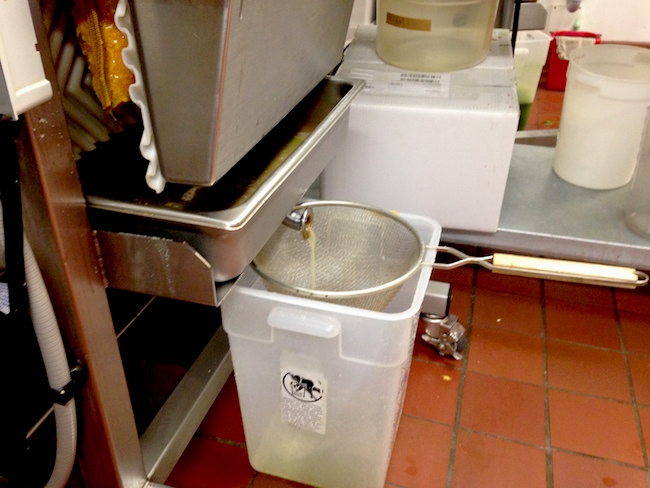 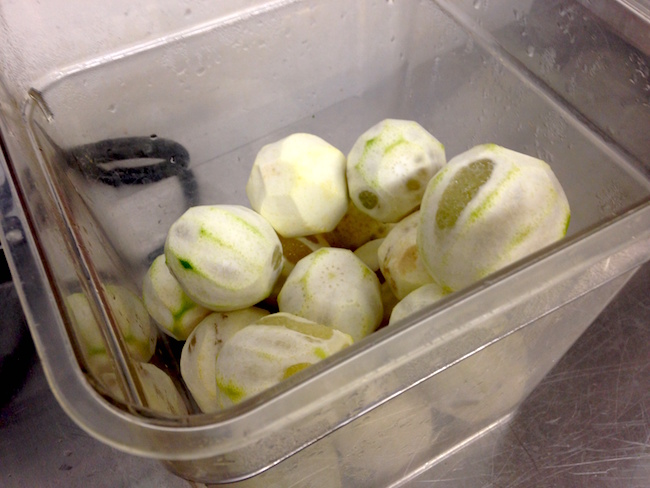 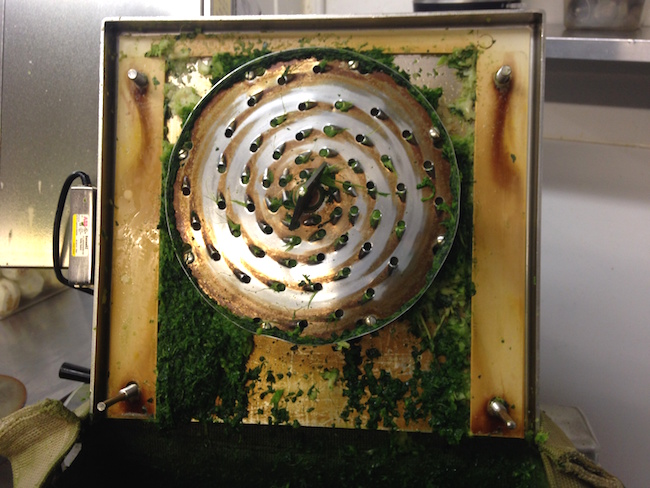 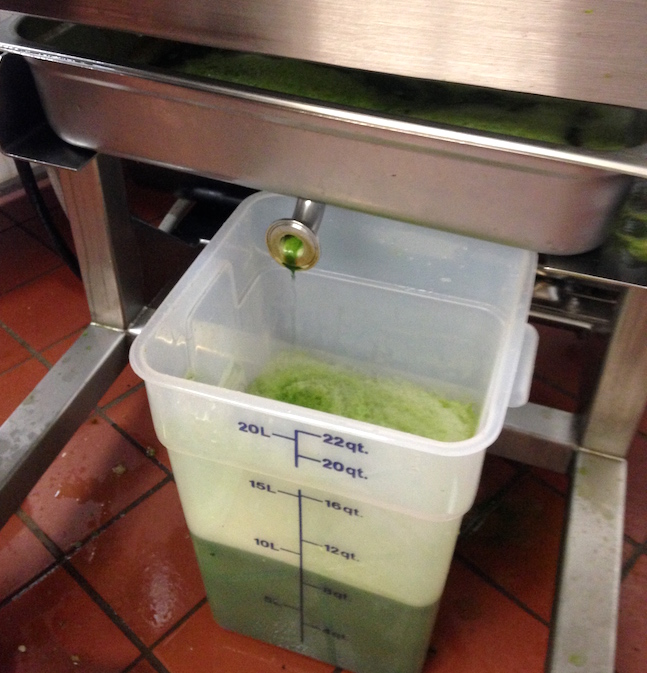 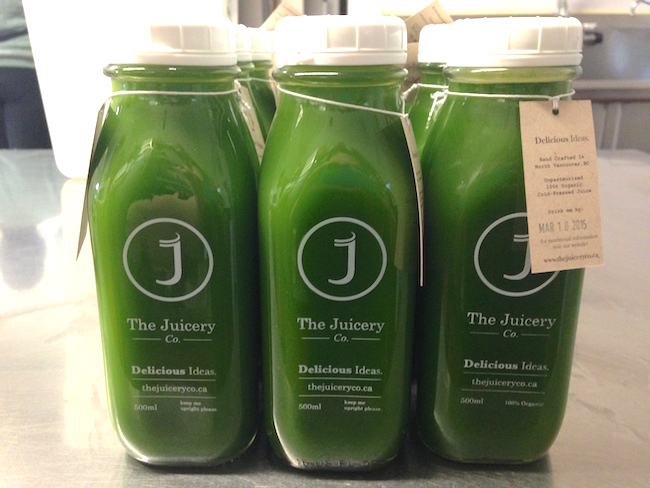 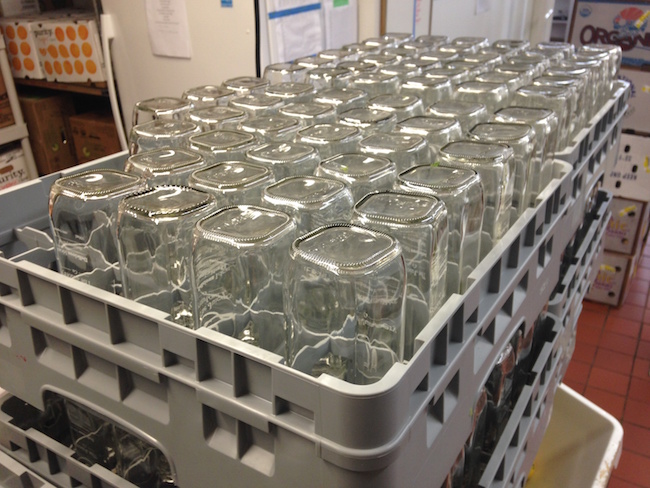 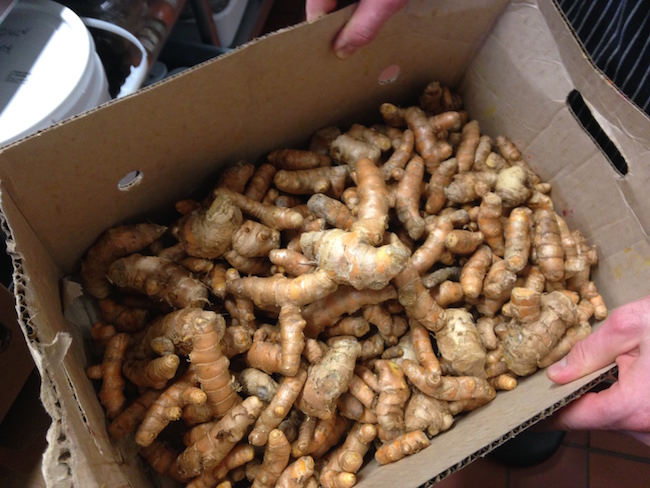 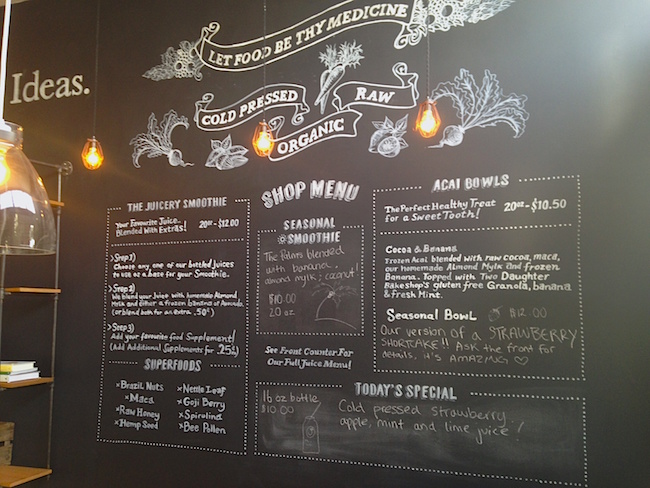 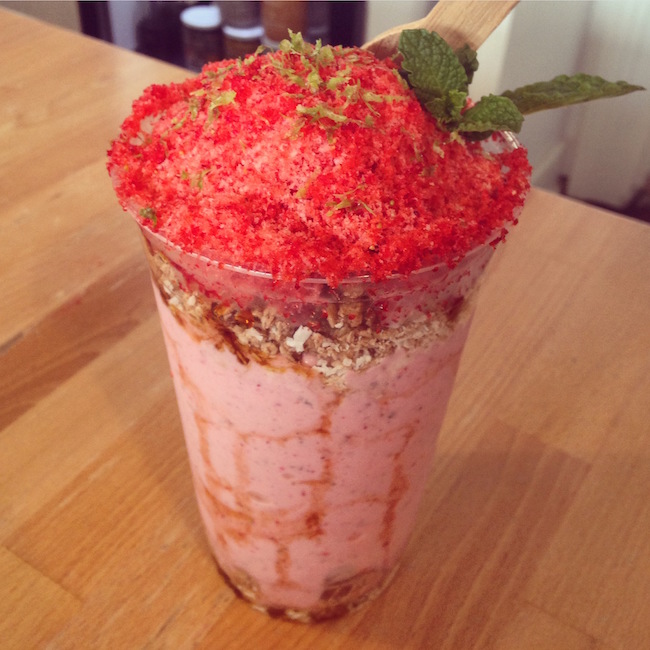 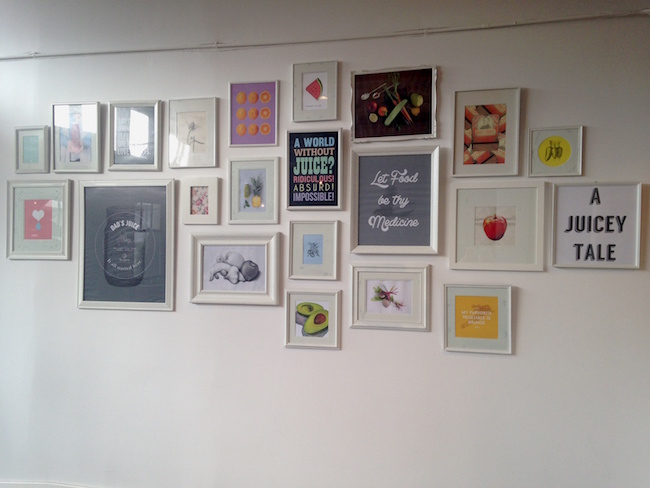 Inside the shop (Lindsay William-Ross/Vancity Buzz)