Starbucks wants you to be in their cafes during the evenings, so naturally the coffee chain giant is turning to new food offerings and – more importantly – alcohol sales.

It will be rolling out artisan bite-size food and alcoholic beverages to thousands of U.S. stores over the next few years as part of its new ‘Starbucks Evenings’ offerings.

The new program will begin after 4 p.m. and will include menu items such as bacon-wrapped dates, truffle mac and cheese, chicken and roasted tomato flatbread, chicken skewers, Chardonnay and chocolate fondue. However, items particularly alcohol will vary between store to store based on regional tastes.

No spirits/cocktails will be available, only beer and wine will be sold. ‘Daytime’ food and drink menu options will still be available during the evenings and the same calm, cafe atmosphere will be maintained. No full restaurant service will be provided either and all orders will still have to be placed through the barista.

According to Bloomberg News, the program was first unveiled in 2010 on a trial basis in select Seattle locations. It has since been expanded to 40 other locations in Chicago, Portland, Los Angeles, Atlanta, Washington D.C., which has led Starbucks to conclude that extensive testing shows the program works.

However, Starbucks Evenings offerings will only be available at select stores in some urban areas where there is close proximity to other restaurants, theatres, crowds and nightlife.

Starbucks currently has over 200 locations within the Metro Vancouver area. It remains to be seen whether the program will reach Vancouver locations in the near future, most likely at cafes located within the downtown peninsula and Central Broadway areas.

In the past, the Vancouver market has been one of Starbucks’ first test markets for new programs and menu items given the city’s close proximity to the company’s Seattle headquarters and Vancouverites’ renowned affinity with the coffee chain.

There will likely be an inevitable push to expand Starbucks Evenings to Vancouver, but strict municipal bylaws and provincial liquor laws could still pose as an major obstacle to Starbucks’ alcohol sales even with the recently confirmed reforms to B.C.’s liquor laws.

Starbucks Evenings is part of a long-term goal to increase the company’s market value to $100-billion. It recently purchased Teavana Holdings and has been expanding the newly acquired brand by opening more of its trademark tea bars, with at least 20 more locations during this fiscal year.

In 2013, it recorded earnings of $2.5-billion in net operating income – a 23 per cent increase over the previous fiscal year. 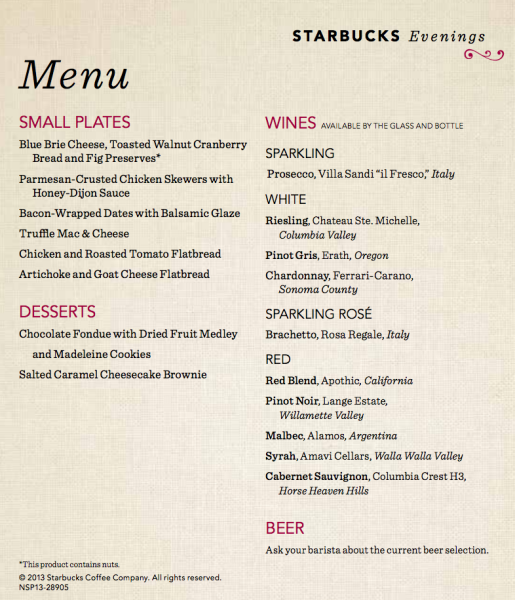