False Creek’s water quality has greatly improved over the last few decades, the central waterway has come a long way since being the hotspot of dirty industrial activity in Vancouver. In recent years, we have seen dolphins and whales in the waters, and as of over the last few days, we can now add the beaver to the list of returning species.

VIDEO: Watch this video of the beaver in Hinge Park at Southeast False Creek’s Olympic Village, by James Shearer.

According to CBC News, the beaver has taken residency in Southeast False Creek at the recently built Hinge Park next to the Vancouver Olympic Village. The park is also a partial science experiment in an attempt to improve water quality by artificially restoring the wetlands and ecosystem that once flourished in the area. Hinge Park includes an artificial waterway (a daylighted stream) that meanders through the park, a stream that feeds off from rain runoff and an old stream that once ran through the area.

The artificial wetlands in the stream consists of plants, critters, insects, and organisms that slowly clean the water before returning it to False Creek near Habitat Island – another artificial construct in an attempt to restore the natural ecosystem.

Given its pristine conditions, no wonder why the beaver chose this place as its new residence. It is not known whether City officials will make an effort to relocate the beaver given its potentially destructive impact on trees or if the area’s trees will be given “anti-knaw” protection.

Knowledge of where this flat-tailed critter came from is also not known at this time. Within the City of Vancouver and the University Endowment Lands, beavers can currently be found along the Fraser River, Stanley Park’s Beaver Lake, Jericho Park, and Pacific Spirit Regional Park (to the west of the University Golf Club’s driving range).

Photo of Hinge Park at the Olympic Village, where a beaver has taken residency. (Photo credits: Tybo Contracting Ltd.) 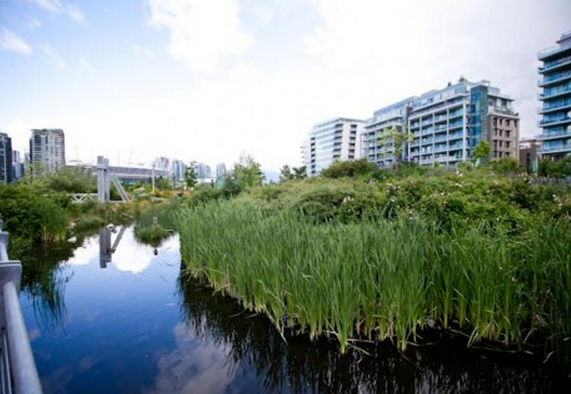