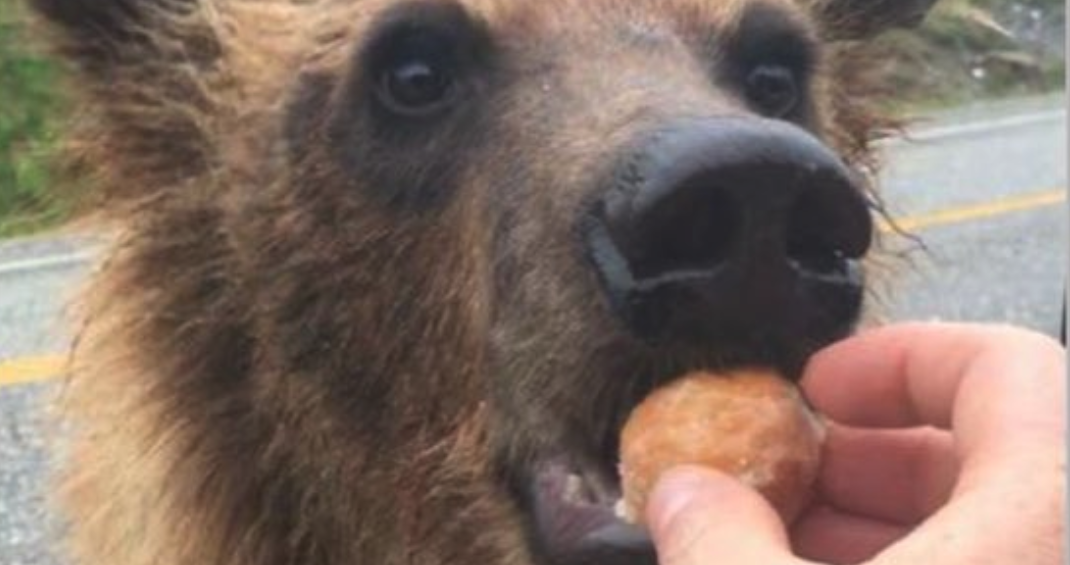 Courtesy BC Conservation Service (COS)

A couple accused of hand-feeding Tim Hortons donuts to bears along a BC highway last summer have been charged, but authorities say this isn’t their first time doling out unauthorized snacks.

The BC Conservation Service (COS) says it found out about the 2017 incident after photos were posted on one of the accused’s Facebook pages — and someone called their toll-free line to tip them off.

“We were sent photos from his Facebook page, and a few videos,” Conservation officer Sam Harris told Daily Hive.

A photo posted to the BC Conservation Service Twitter account announcing the charges shows someone popping a tiny donut into a bear’s mouth.

Unfortunately, authorities say it’s fairly common for tourists to feed bears along that stretch of rural highway. However, it does seem rather unique for people to document — and boast about — the experience.

A fed bear is a dead bear

As for the bears that are fed donuts and other junk food and get used to human contact, Cooper says the outlook is pretty grim.

“Once they become habituated to people, and they get food from people most of those bears do eventually have to be euthanized because they become a public danger,” he says.

“So once tourists start feeding them it’s pretty much ‘a fed bear is a dead bear.’”

Randy Scott and Megan Hiltz are scheduled to appear in a Fort Nelson, BC courtroom next month. They are charged with intentionally feeding dangerous wildlife, and could be hit with a $345 fine under the Wildlife Act.

Despite the charges, some people responding to the conservation service tweet on Twitter doubted the couple would learn from the incident:

“You will never fix stupid,” one person wrote.

The B.C. Conservation Service operates a free hotline for the public to anonymously report conservation offences, including wildlife-human interactions.

During the summer of 2017, the Peace BCCOS received complaints regarding individuals posting pictures on social media of bears being unlawfully fed. Today charges were laid concerning the matter and as a result two individuals are scheduled to appear in Ft Nelson Court on Nov 5. pic.twitter.com/MzZ0L0senX

You will never fix stupid.