By Jason Yamasaki for Vancity Buzz

The season has definitely turned. It’s fall and you need some new reds to keep you going for the next few months.

Two of the world’s most respected wine writers, Hugh Johnson and Ian d’Agata, recently called out British Columbian Syrah as outstanding and leading Canada’s breakout on the world wine map.

With the experts taking notice of the earthy, dark-fruit notes and subtle smokiness of B.C. Syrah, it’s time you did too. I’ve been following some of our best local Syrah for a number of vintages. These wines are produced in relatively small quantities and can sometimes be difficult to come across or find in stock, but your search will be rewarded. They are available direct from the winery or through a number of Vancouver’s private retail wine shops like Kitsilano Wine Cellars, Liberty Wines, and Legacy Liquor Store. 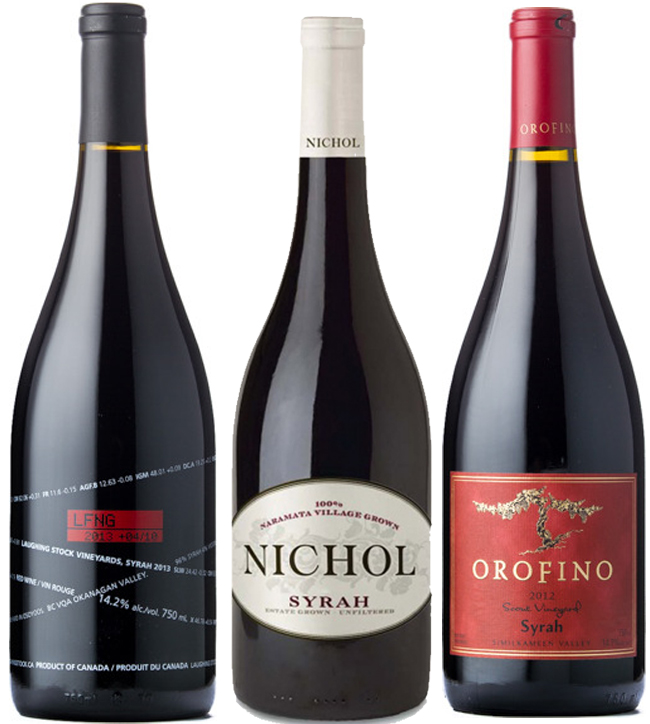 Nichol‘s Ross Hackworth and Matt Sherlock tend the oldest Syrah vines in Canada, planted on granite in 1990. The wine is made in the old-world, traditional manner and offers the immensely food-friendly feature of just 12.8% alcohol. $40 to $45

It may take a bit more effort, but it’s worth seeking out Nichol’s ‘Nate’s Vineyard’ Syrah. Made with the fruit of their younger vines, it showcases a sensationally savoury Syrah worth sipping all season long. $30 to $35.

John and Virginia Weber make a jaw-dropping range of wine at Orofino in the remote Similkameen valley. They offer two Syrahs: the classic ‘Scout Vineyard Syrah’ aged in oak barrels for 20 months is bolder, while the more vibrant and unique ‘Wild Ferment Syrah’ is aged in tanks made of local concrete — the first of its kind in BC. Both retail for $30 to $35.

Named “Best Canadian Red” by Decanter Magazine, Laughing Stock’s 2011 Syrah impressed the judges thanks in part to three separate fermentations in three different vessels. The result is a brooding, briny, dark-toned Syrah perfect for pairing with richer foods and game meats this fall. $38 to $45.

Jason Yamasaki is the Wine Director at Chambar and was awarded the title of Best Sommelier in B.C. by both the Canadian Association of Professional Sommeliers (CAPS) and the 2015 Vancouver International Wine Festival.