This time – a record number of home are expected to be sold in British Columbia this year, according to the BC Real Estate Association.

About 40% of those homes sales are in Metro Vancouver, with the bulk of the rest being made up of homes in the Fraser Valley and Victoria. 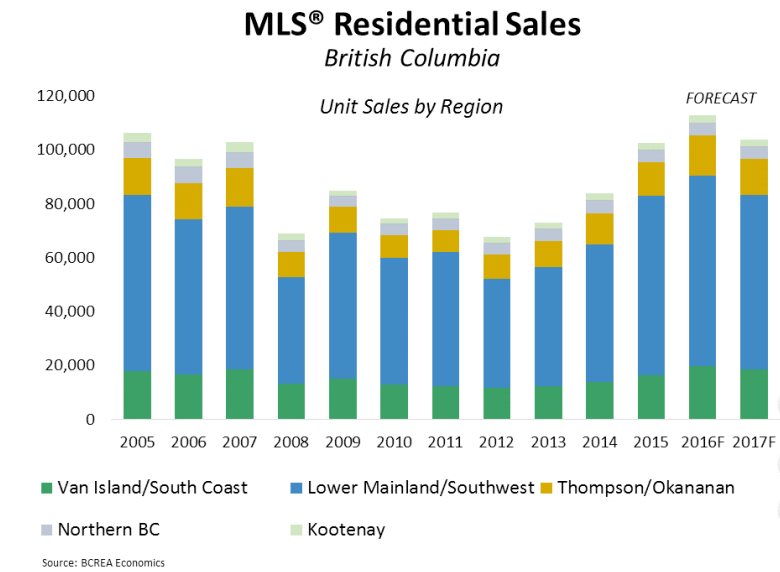 MLS BC home sales through the years (BCREA)

As ever, the red hot housing market is predicted to cool down, but we may have to wait until next year, says the BCREA.

“While the cyclical nature of housing markets can exact a harsh toll on affordability in the short term, there is some relief for beleaguered home buyers on the horizon,” said Chief Economist, Cameron Muir, in a release.

“In Metro Vancouver, a record number of homes are now under construction,” said Muir.

“A moderation in housing demand combined with a rising number of both new and resale homes on the market is expected to create more balance and less upward pressure on home prices.”

The association thus predicts home sales in the province will drop about 8% to 104,400. Still well above the 10-year average of 85,000, but I guess you can’t have everything.

But while the new foreign buyers tax in Metro Vancouver is also expected to dampen sales, things are booming elsewhere now too, says the BCREA.

“The introduction of a 15% tax on foreign national home buyers in Metro Vancouver is expected to accelerate a moderating trend in the market that began earlier in the year,” said Cameron Muir, BCREA Chief Economist.

“However, other regions of the province are performing above expectations and at the provincial level, largely offsetting Metro Vancouver’s deceleration.”

Those prices are backed up by a recent report from Central 1 Credit Union, which predicts the median home price in Metro Vancouver will increase to $765,000 by 2018.

Stuck between a rock and hard place anyone?