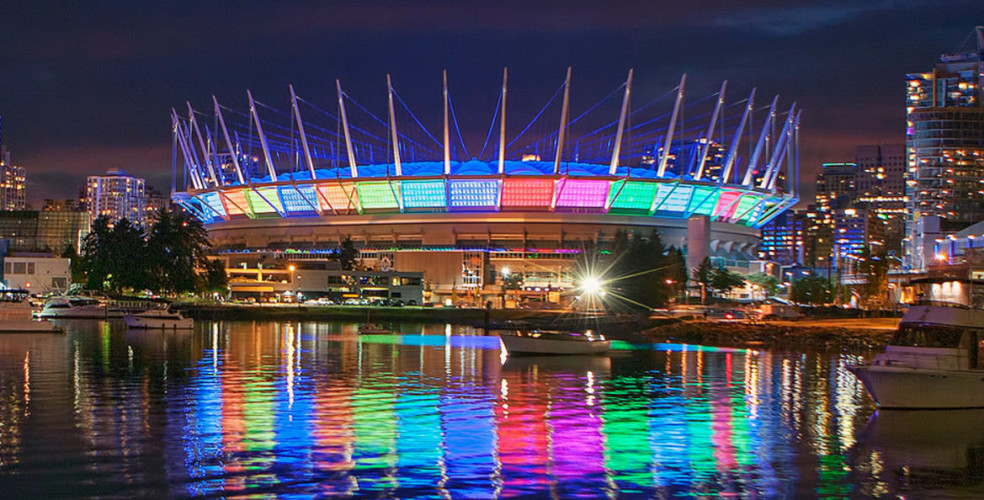 For more than 30 years, B.C. Place Stadium has been the most prominent landmark in downtown Vancouver’s skyline, but that will soon change with the development of the vacant lands between the stadium and False Creek.

Whether it be the stadium’s original air-supported fabric roof, nicknamed by some as the “marshmallow in bondage”, or the new cable-supported retractable roof, the stadium’s size and architecture provides a break in the monotony of the ‘cookie cutter’ condominium skyline and gave the city a much-needed unique sense of place – a source of civic pride.

Click on the image for an enlarged version of the Vancouver skyline panorama.

But the most visually impactful change the retrofit created was the architectural statement the new roof made.

The so-called Northern Lights display wrapped around the rim illuminates brightly during the dark hours of the day before sunrise and after sunset. It is made up of 1,700 ETFE panels and 6,800 linear feet of LED lights that enable programmable custom light displays.

“Good lighting can make a building iconic,” Konstantinos Mavromichalis, the Director of Design for Urban Visuals, told Vancity Buzz. “The expressive and informative lighting of buildings like B.C. Place show what thoughtful urban scale lighting can do to shape the way we experience and connect with our cities.”

“In a longer view, using architectural lighting to convey emotion and information is an important step in making our surroundings more informative and intelligent.”

The panels glow for the two sports teams that call B.C. Place home, with a blue colour for the Vancouver Whitecaps FC and orange for the B.C. Lions. It also lights up for concerts, charities, special events, and occasions, including a giant Union Jack for a Paul McCartney concert, a rainbow kaleidoscope for LGBTQ pride week, an orange jack o’lantern for Halloween, a giant poppy for Remembrance Day, a candy cane for Christmas, a solid pink colour for Pink Shirt Day, a solid green colour for St. Patrick’s Day, and many more. Following the terrorist attacks in Paris last November, stadium technicians lit up the Northern Lights in blue, white, and red – the colours of the French flag – in solidarity with the people of France.

Earlier this month, the flags of all 16 nations participating in the inaugural World Rugby Seven Series tournament in Vancouver were illuminated throughout the duration of the event. And a single flag, the flag of Canada, rippled across the display ahead of last Friday’s FIAF World Cup qualifier between Canada and Mexico. There are also 36 masts, each 14 storeys tall, spaced out around the circumference of the stadium to suspend the cable systems that support the retractable roof. Each mast is lit up at night by spotlights on the base to complement the illumination of the Northern Lights.

Consequently, the reincarnated B.C. Place has quickly become one of the city’s most photogenic and loved landmarks in the skyline from False Creek. But unobstructed views of the stadium will almost completely disappear over the next 10 to 15 years when the surrounding areas are fully developed.

“I love that the B.C. Place roof has the capability to change colours depending on the day of the year, or any special events happening around the city,” local photographer Jenn Chan told Vancity Buzz. “I think it would be a shame to have views of B.C. Place blocked, but I understand it’s inevitable to have more buildings come up as our population continues to grow. It’s also the reality of the product of a growing economy.”

As well, all of this begs the question of whether the stadium lights will be dimmed or even turned off when more residents move into the area.

The following future developments will completely block views of the stadium’s iconic roof:

Parq Vancouver, the casino-resort complex that will become the new home of Edgewater Casino, will closely hug B.C. Place’s southern end and block most of the roof views when traveling northbound on the Cambie Street Bridge.

The development consists of a podium containing entertainment and dining facilities and the 72,000-square-foot casino floor. Two hotels operated by Marriott will occupy three towers: two 15-storey towers and one 25-storey building. The complex is scheduled to open early next year. Preliminary concepts for the redevelopment of the old Plaza of Nations site, on the shore of False Creek immediately south of B.C. Place Stadium, call for buildings as high as 30 storeys. Canadian Metropolitan Properties wants to build as many as 2,000 residential units, 350,000 square feet of office space, and retail and restaurant spaces.

There will also be public spaces and amenities, such as a 4,000 person capacity outdoor plaza to replace the existing plaza space and an indoor ice rink that will double as the new practice arena for the Vancouver Canucks. The proposed developments within the remaining undeveloped parcel of Concord Pacific’s property on False Creek will hug the western end of the development site. Initially, the plan positioned the residential towers along Pacific Boulevard and placed the expanded Creekside Park space by the water.

However, the municipal government’s recently approved plan to demolish the Dunsmuir and Georgia viaducts shifts the development sites to the western end of the Concord Pacific’s property, towards B.C. Place.