Vancouver’s skyline is about to get a bit more colourful. The city’s landmark stadium will glow with the colours of the rainbow during Gay Pride weekend on Saturday, August 3 and Sunday, August 4.

Gay Pride weekend marks the peak of Vancouver’s LGBTQ Pride festivities, with the ever popular Vancouver Pride Parade and Pride Festival – both held this Sunday. BC Place Stadium’s “Northern Lights” roof lighting display will be animated with the colours of the rainbow in celebration from sunset to 11 p.m. on both days.

BC Place has used the roof lighting display to promote specific events (orange for CFL BC Lions games and blue for MLS Vancouver Whitecaps matches) as well as seasonal displays (e.g. orange for Halloween, candy cane colours for Christmas) and community and charitable organizations (e.g. pink for breast cancer awareness).

Last November, for several continuous days, BC Place’s lighting display animated a giant Union Jack to mark the arrival of Sir Paul McCartney for his concert at the stadium. 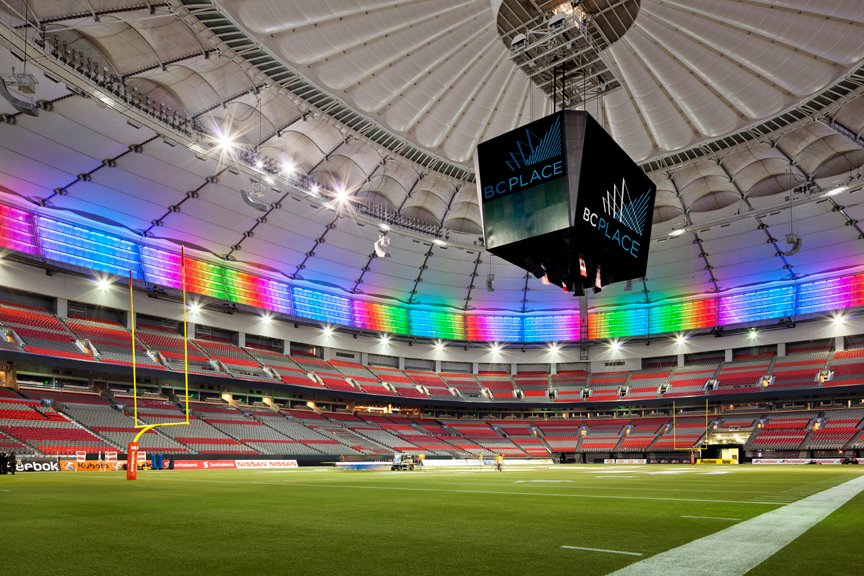