Recently the B.C. government announced their plan to crack down on the misuse of the term “organic” as applied to fresh foods and produce sold around the province. We take a look at what this could mean for local farmers and consumers.

Shoppers are often motivated by the term “organic” when making purchases, especially when it comes to produce and artisanal packaged foods. But sometimes the product isn’t organic at all, and the consumer is being misled. In order to protect shoppers, and promote participation in the province’s and country’s organic certification program, British Columbia recently announced new rules about labeling that they intend to enforce.

By doing what the B.C. government calls “taking charge of the term ‘organic,'” the province is hoping to deter false advertising of products, as well as encourage more farms to employ organic farming methods and become certified at either the national or provincial level.

For Roberta LaQuaglia, the operations manager of the Vancouver Farmers’ Market, the change is welcome, since it provides further opportunity to educate consumers.

“‘Organic’ holds such a strong draw for customers,” explains LaQuaglia. “People shop at the markets specifically looking for organic, and believe the whole market is organic, and that’s the point where we have to educate.” 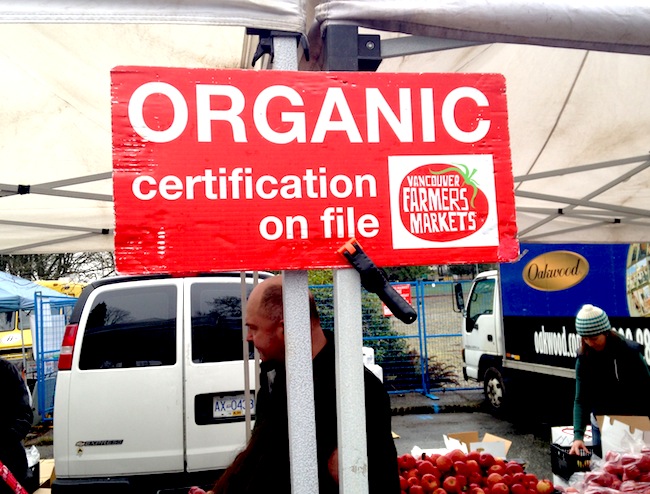 So much of the use of the term organic comes down to signage and marketing. While a vendor could previously say their eggs come from “organically fed” chickens, under these new rules, such wording is not allowed unless the producer and product are certified organic.

The VFM has always had their vendors display signage indicating their are certified organic (and not permitted other uses of the term “organic” otherwise), but LaQuaglia says there wasn’t much incentive for the vendors to change their ways until now.

Enforcement of what can, generally speaking, be seen as false advertising, on the part of vendors hoping to draw shoppers in with the word “organic,” was always consumer driven. Up until now if a vendor had false claims on a product the complaints would have to come from the customer through the Canadian Food Inspection Agency (CFIA).

While the B.C. government hasn’t specified how they’ll go about enforcing the use of the term, LaQuaglia still sees this as a step in the right direction.

From a farmer’s perspective, this shift in the government’s management of the word “organic” is also a positive. Kevin Klippenstein of Klippers Organics has been farming since 2001, and has been a VFM board member and chair of the Organic Farming Institute of B.C.

Klippenstein walked me through the steps a vendor would have to go through in order to become certified organic, at either or both the provincial and national level. Time and paperwork seem to be the largest constraints of the process, which is unified across each governing body, though a vendor has their choice of regional certifying bodies.

Producers looking to sell outside of B.C. would have to pursue national certification, which is the predominant reason a vendor might seek that level of certification. LaQuaglia adds that farmers who want to sell to wholesalers are typically using conventional methods, though she notes that there’s a growing demand in China for organics.

Overall, however, Klippenstein says it isn’t particularly hard or expensive to pursue organic certification in B.C. and Canada.

For a farmer to go organic, the largest cost consideration has nothing to do with soil or equipment, or even certification fees.

“The biggest thing with organic versus conventional [farming practices] is the labour involved,” explains Klippenstein. An organic farming operation will have to spend time and money on people to do the weeding by hand, whereas a conventional farmer could use machinery to do the same, or, more likely, spray the crops with a chemical to combat weeds and pests.

The higher labour cost is likely the reason why “organic” products sometimes are priced higher, though at times an organic product that’s locally-grown might cost less than its imported conventional counterpart at the local supermarket, points out Klippenstein.

Klippenstein shares with LaQuaglia the sense that there is a lack of savvy when it comes to the organic produce market, and that lack of information reaches both sides of the vendor stall.

“There are farmers who don’t even know what organic standards are,” says Klippenstein. LaQuaglia agrees, and points out that the knowledge gap can be frustrating for farmers who do have certification and operate in stalls adjacent to vendors who are using the term loosely in order to attract customers.

When it comes to the latter category of sellers, Klippenstein sees this next phase of organics in B.C. as an opportunity to “force those maybe riding on the coattails [of certified organic farmers] to certify and then pay into the system.”

At the VFM just over half their vendors in the farm category are certified organic, says LaQuaglia. Some of those vendors began as conventional, but over time made the switch to certified organic, after realizing what a powerful impact that can have on their consumer appeal.

According to the Ministry of Agriculture, the B.C. organic sector is diverse, and “includes livestock, dairy, vegetables, fruit and berries, and spice and herb producers, grains and seeds and many specialty value added products.” 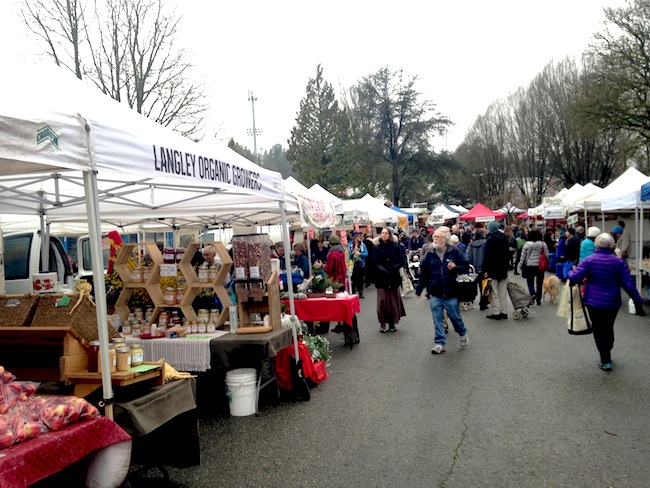 At the end of the day, though, for a consumer, they primarily head to the store or farmers’ market for the purpose of shopping. The learning experience is secondary.

“As much as we are an outlet for groceries, we’re also a resource for education,” points out LaQuaglia of the role the VFM plays in the community. Of particular value is having the farmers there in person.

“The heart of the issue with organics is that people should know more about where their food comes from and how it’s produced,” adds LaQuaglia.

Right now the B.C. government hasn’t gone into great detail about how they will monitor the usage of the word “organic” at points of sale, but they do propose to investigate consumer claims of misuse of the term, and develop an “enforcement system” to ensure the term is being used only by those with certification. They also plan to run a survey of certified organic producers to help glean information on their proposed plan.

But the goal is clear: The customer needs to know.

“Clarity in the marketplace will improve by requiring that everyone using the term organic is certified through an accredited certification body,” says Susan Snow, Certified Organic Association of BC (COABC) co-president, adding: “It will ensure that consumers have better information when making their purchasing decisions and it will also encourage continued growth of organics in B.C.”

This new chapter in B.C.’s organics has the potential to benefit many people. “I think this will be great for the consumer, and the farmer, and the whole province,” attests Klippenstein.