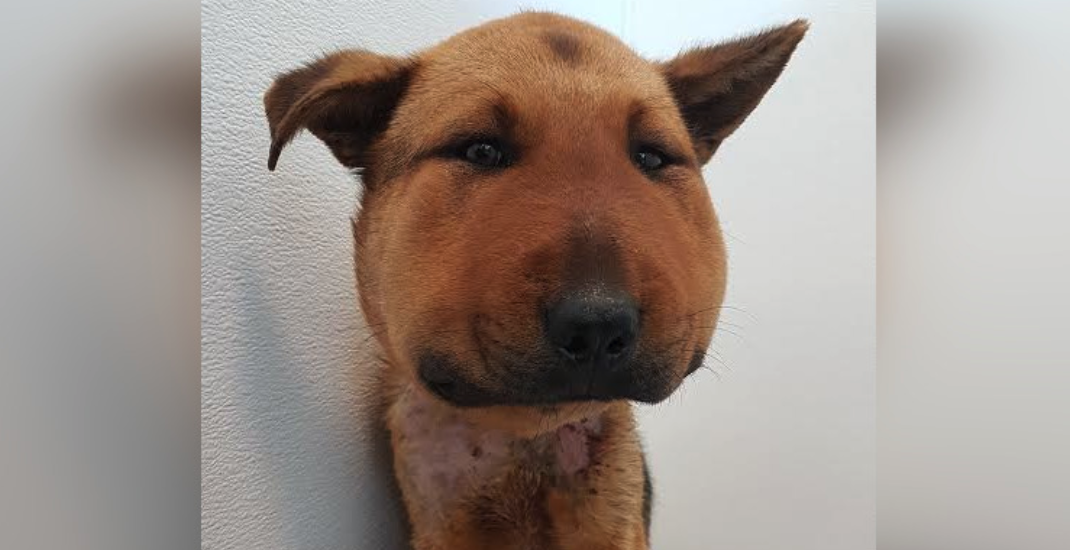 Hope after she was found/ BC SPCA

A BC man has been charged with animal cruelty after a German Shephard was found tied up in the woods with wounds so bad that “her jugular vein and trachea were exposed,” says the BC SPCA.

According to a release, the BC SPCA took custody of Hope in May 2019. The one-year-old dog was found suffering from emaciation, dehydration, extreme muscle wasting, and a deep, severe neck wound.

According to Marcie Moriarty, chief prevention and enforcement officer for the BC SPCA, the dog was abandoned in the woods, tied to a tree with a plastic cable wrapped tightly around her neck.

“The cable was tied so tightly that her face was pressed to the tree and she could not lay down or move. The wire was deeply embedded into her neck, causing such a massive wound that her jugular vein and trachea were exposed,” said Moriarty.

Hope’s injury caused her body to be so badly infected that her head was severely swollen and the wound was filled with maggots. Hope was too delirious and weak to walk when BC SPCA officials found her.

“She was rushed to a veterinary clinic in Duncan to be stabilized, then transferred to a specialized emergency clinic in Victoria, where she received around-the-clock life-saving treatment.”

Hope underwent multiple surgeries, and after months of care and medical treatment, she was adopted by a caregiver at the veterinary hospital.

She is now “happy and healthy” in her new loving home, notes the BC SPCA.

If convicted, Kevin Timothy of Chemainus faces up to two years in jail with a maximum $75,000 fine and up to a lifetime ban on owning animals.