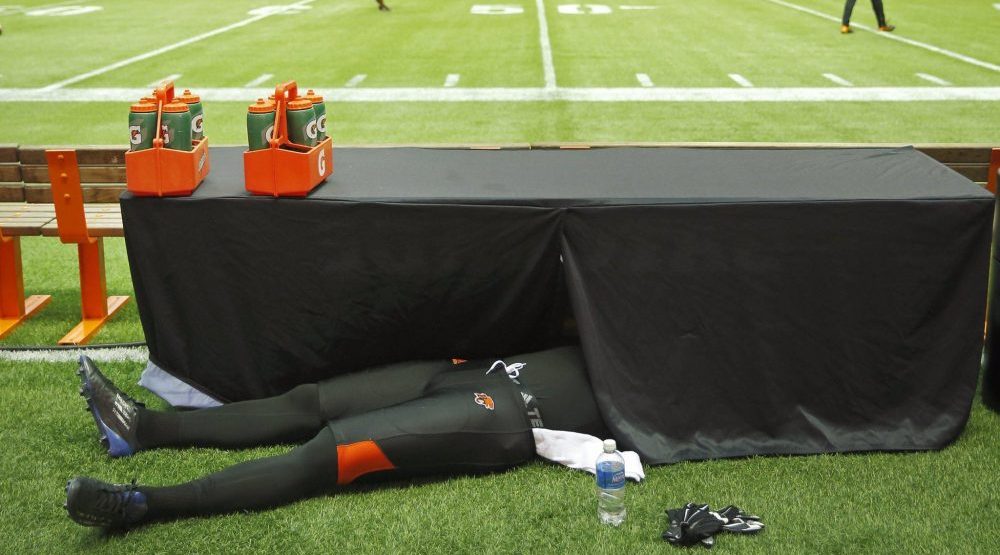 It’s one of my favourite sayings of all-time, “There’s always a grain of salt, you just have to look for it.” Right now, following their Thursday night 25-14 loss to Toronto, the BC Lions are combing the sweat-soaked turf of BC Place for that fragment of hope.

The defence played decent, the offence was decent, their special teams were decent. Tonight, though, this group learned that “decent” doesn’t win football games.

The Leos pounced right off the bat with a Jonathan Jennings QB keeper to get the team going. After a missed two-point conversion though, the tides shifted. Fumbles ensued, missed interceptions emerged, questionable calls arose and the Lions’ perfect record fell victim to an all-around rough night.

It was a losing effort, but wait Vancouverites, before you judge, we can blame the loss on other people. That’s kind of our favourite past time out here isn’t it? I’ve been a Vancouver born and raised sports fan all my life, and if you’re going to deny this, then you’re lying to yourself. Think about it…

Following the Lions’ lost challenge regarding a very interesting roughing the passer call, the 18,921 in attendance lost their lids. They were not happy. BC then handed the Argos a brand new shiny field position and a chance to put their stamp on the game. An opportunity that they capitalized on.

When asked about the effect of the Ricky Ray roughing call, linebacker Solomon Elimimian shrugged it off and implied that the lost challenge wasn’t the problem.

“The guys were down but that’s no excuse. We need to be able to respond better to adversity.”

Truer words were never spoken. On a side note, I gave one of the team’s defensive captains an out and he didn’t take the bait. That shows class and leadership. Major props to the big man!

2. Anthony Allen likes to move it move it

Anthony Allen checked into this game in a fill-in role. With Jeremiah Johnson on the sidelines this week, AA had a huge opportunity in front of him. He decided to take full advantage too.

The kid had already chalked up over 100 yards shortly after the start of the second half. He gave BC a pulse when they looked like they were about to enter rigor mortis. He brought the Lions back to life and then did this…

He pounded in his first touchdown as a Leo with two huge bone crushing breakthroughs. He trucked through the soul of the first Argo defender and then made Toronto DB Aaron Berry look like an amateur. He put his head down and didn’t let his legs quit. He rumbled his way into the end zone to get BC back in the game. Unfortunately though, his efforts were all for not.

Allen put up 107 rushing yards and 32 recieving with one major.

There is a ever so faint whisper in the air of a busy backfield for the Leos. Allen has the hot hand. Do you go back to Johnson next week? It’s a tough call.

As the worst cliche in broadcasting goes – only time will tell!

There are a lot of Travis Lulay fans in British Columbia. We know this.

Jonathan Jennings didn’t have a terrible first half, but his numbers weren’t insanely sexy. He also had an ugly pick in the mix as well. He wasn’t perfect, but these days, who is?

Well, if you checked out the local Twitter feed at halftime, you’d see an outcry for Travis Lulay. The man is a quality quarterback and has given BC a lot of great years. The Jennings leash though was yanked on quickly. Lulay checked in late in the third quarter and JJ’s night was over.

“I’ve said all along, we’re not going to have any hesitation to make a change if it’s necessary,” head coach Wally Buono said after the game.

“The game isn’t on Jonathon Jennings, it’s on the team,” Buono added, confirming that Jennings is still scheduled to start next week.

Travis had some success, but it was marred by the brutal mess he was left to clean up. The Lions never led after the 9:13 mark of the second quarter. In fact, after their initial touchdown just over five minutes into the game, it took them over three quarters to find the scoreboard again.

"We didn't finish and we hurt ourselves a lot early."@TravisLulay on Lions loss to Argos. 🏈 👊🏼https://t.co/rXn2x1qWcV

Now it could just be a pulled quarterback situation and that’s it. Or it could go deeper. The younger Jennings will likely get the start next week in Saskatchewan, but how comfortable will he feel? Losing by just a few scores with lots of time on the clock and he gets the yank in just the third game of the year. It’s a tad peculiar one might say.

Now, I’m not a gossip columnist. I’m not trying to start a rumour here. It’s an obvious head scratching situation though. It’s a question that every media outlet will ask and debate about on Friday. What was the motive behind the switch? Was it just a simple kick in the pants to the team or was it more?

Toronto Argonauts kicker Lirim Hajrullahu hit six field goals and one extra point in this game. This means that the PA announcer had to say “Hajrullahu” seven times (for those not using a calculator).

This isn’t extremely impressive but everybody I spoke to pronounced his name differently.

Daily Hive tips its hat to the public address team. You said it with excellent pronunciation, superb annunciation, and stupendous exclamation. Tens across the board!