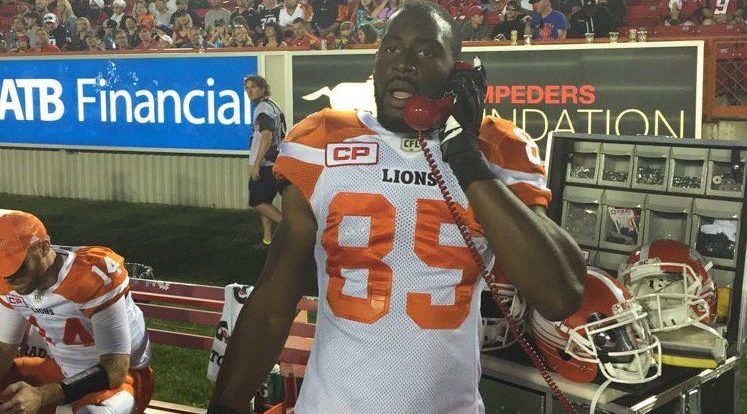 The BC Lions were oh so close to sending a clear message to the rest of the CFL on Friday night, within a few plays and stops here and there of beating the very reputable Calgary Stampeders in their own barn. This game had momentum shifts all night long, and with four minutes left in the fourth quarter, BC held a comfortable 15-point lead that the Lions ultimately coughed up, leading to their demise.

The Stampeders scored just as many points in those final minutes on their way to the comeback, led by quarterback Bo Levi Mitchell who threw for 364 yards, connecting on 29 of 44 passes and three touchdowns. Wide receiver Greg Wilson had two of those touchdowns, on just three receptions for 118 yards.

Here’s the best of went down in the CFL game of the year.

On a night that seemed like Jonathan Jennings’ true coming out party, the Saginaw State sophomore threw two questionably up-for-grabs balls late in the game that gave victory to the Stamps.

The first was with under two minutes to play in the game. With pressure coming, Jennings made a difficult throw that was picked off by Ciante Evans, giving the football right back to Calgary who eventually tied it all up, forcing overtime.

The second pick came in the OT frame was thrown into double coverage into the end zone that really had no chance of finding the intended receiver. Check it out for yourself.

The best thing to do was throw the ball away, keeping the game alive by settling for a field goal to extend OT.

Again, the two interceptions were both fundamentally the nail in the coffin for BC. It’s too bad it went down this way for Jennings, but there’s no doubt that he’ll learn from the mistakes.

“I let the team down.” – @JJ_Jennings10 feeling responsible despite big showing in Calgary. #CFLGameday #BCLionshttps://t.co/O1chQoG4DN

#BCLions Mic'hale Brooks, David Menard & Mike Edem are not expected to play next week vs #Alouettes. Stewart & Roh are day to day. @CFLonTSN

There’s only so much a roster can do when it’s been depleted after so few plays. As I listened to TSN 1040 at halftime, both B-Mac and Don Taylor expressed that Calgary should be able to wear out what’s left of the defence in the second half of the ballgame. Looking back, it’s quite the accomplishment how effective the D played the rest of the way, given the circumstances. That is, until the last four minutes of the fourth quarter.

With a season-ending injury to veteran slotback Nick Moore just two weeks ago, Brian Burnham got a lot more looks his way on Friday. The former Tulsa Golden Hurricane had nine receptions for 139 yards on the night, which included this catch that broke the plane for a touchdown in the 3rd quarter.

Emmanuel Arceneaux had the best game of the season for himself alongside Burnham, with six receptions for 128 yards. Manny has had a relatively slow start to the season by his standards, so it’s nice to see that he’s trending upwards.

This is not the last time the Lions will face Calgary, since they host their Western rivals in Week 9 at BC Place. The Stamps are always up there as a favourite to win the West, so it’s nice to know that BC will still have a shot to hold the tiebreaker if things get close with the standings nearing the end of the regular season.

BC heads off to Montreal next Thursday for a tilt against the Alouettes. Kevin Glenn and Duron Carter led the Als to a 41-3 rout over the Riders at home yesterday. Although Montreal currently sits last place in the East, they are not going to be a team that you can just roll over.

Jeff Paterson threw out a great tweet last night regarding the Lions and their social media following, which was so true.

great to see twitter so engaged for a Lions game on a sunny Friday night. Been a while. People seem into it.

Now let’s hope sports fans and the general public in BC will not use the loss to Calgary as a reason to not attend and fill the seats at BC Place going forward. The brand of football that the CFL has the capability of producing was on display yesterday evening, and hopefully it maintains the excitement that it drew in Week 6.