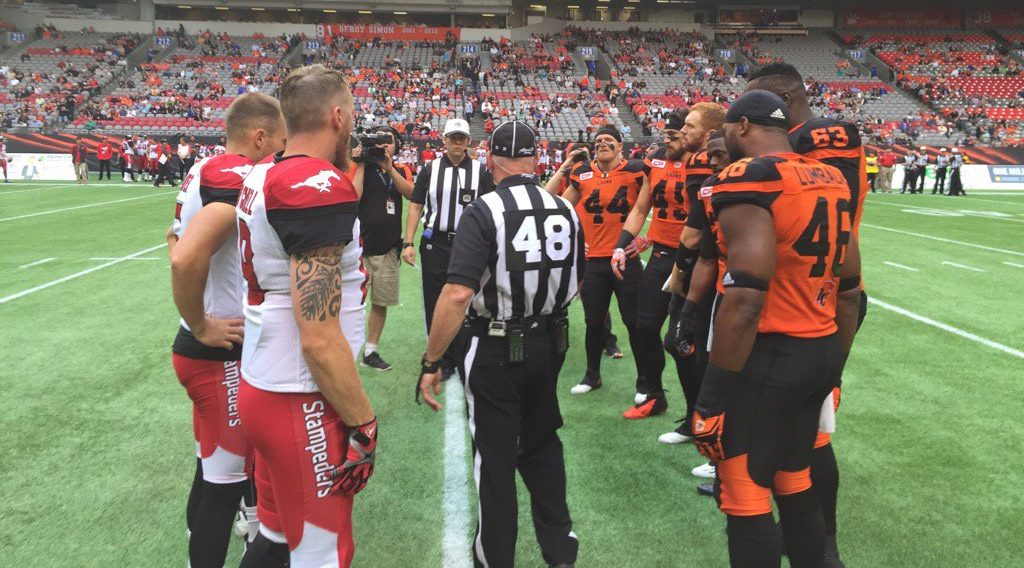 The Lions lost 31-21 to the Calgary Stampeders in their game of the preseason on Friday night. Aside from that…

It’s not an easy task to find unbelievable things to say about exhibition football. Nonetheless, this writer toughed it out in the most extreme conditions. Hot sunshine, dress socks, and black slacks.

Note to self, don’t listen to Sports Editor Rob Williams’ wardrobe tips when it’s 25 degrees out.

Free agent signing Nick Moore looked like he was in regular season form Friday night. His lanky 6’2″ frame was noticeable on a few drives and in perfect position on the majority of his five catches for a team-high 74 yards.

Another standout was Bryan Burnham. He had a big 2015 season with 35 receptions for 423 yards. He also looked scary in the early going with a beauty over-the-shoulder grab to open the scoring.

Aside from the touchdowns and the national anthem, the play that brought the crowd to their feet, belonged to rookie Devonn Brown. He cut in to make something out of nothing on a quick five-yard toss up the middle. He took the rock for a 64-yard trip before getting ripped down just before the Calgary goal line.

DJ Trouble was on the sidelines spinning tracks and getting the crowd riled up. He got off to a rough start. His first track was a remixed Bryan Adams tune. Now I’m sorry that I’m using this article to sound off, but it needs to be said – You can’t remix classics!

Bryan Adams and Michael Jackson remixes drive me up the wall!

In the second half, the young DJ truly came into his own though. He dropped some Luke Bryan and played multiple DMX tracks. You heard right… Multiple DMX tracks. Something like that hasn’t been done in Vancouver since Flesh of my Flesh went Bronze at A&B Sound in 1998.

Pretty sure Bronze means over 10 albums were sold. They almost had to restock.

Nice work DJ Trouble. You sincerely made a fan out of me and barring any more Adams, Jackson, or Phil Collins remixes, I promise to sing your praises for the rest of the season buddy.

This game was not a sellout by any means. In fact, if you stacked everyone up, you’d probably have three or four completely empty sections. Nonetheless, the crowd was pretty great for a preseason game.

Hardcore Lions fans came out in droves with some even dressing up to the nines with orange face paint, makeup and hair dye. This team truly has an opportunity here and it’s everyone’s (football fans) hope that they realize this and capitalize.

With the Vancouver Canucks in the tank, the Lions have a chance to take over. I know what you’re thinking too, “this is a hockey town”. Yes, that’s true and nobody’s arguing that.

Remember 2004 though? With the lockout in the NHL, the BC Lions filled the barn to watch Casey Printers dominate the CFL. I remember it well because I was a Lions ball boy at the time. Oh that’s right! 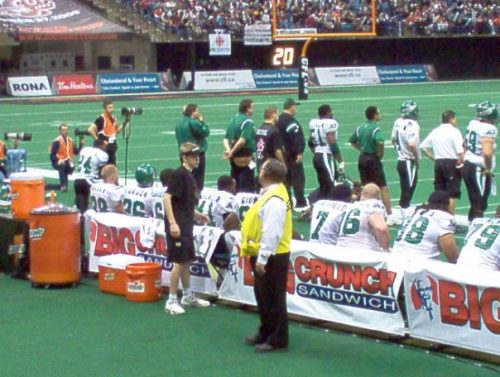 When there’s little to no hope for hockey, Vancouver goes from a hockey town to an anything town. The door is wide open for the next big thing.

The BC Lions looked sharp Friday night in a losing cause. I don’t mean literally (see below for uniform complaints). On another level though, the team was hard hitting, fast, and anxious to win. You can’t ask for much more than that.

The DJ did a solid job. The cheerleaders were on their game. The tickets were well priced. The beer was flowing (not in the press box – I swear!). The weather cooperated. And the first stringers were on their game. If the Lions can rely on all of these things night in and night out, they could put a lot of butts in the seats at BC Place this season.

Everyone has laundry day, but that’s two games in a row now that the BC Lions have worn these off-coloured helmets. I can only assume that the stickers or the chinstraps didn’t meet industry standards on their regular buckets, so they had to resort to these again.

They are supposed to be the team’s road lids, while some black and orange ones are supposed to grace the player’s heads at home. What’s interesting though is that it’s a different colour orange and every time you looked at the field it was nearly impossible not to notice.

Not sure why Adidas made their road orange different from the home orange, but if you think you’re crazy, you’re not. It’s also unclear why Adidas ditched the alternate gun metal black on black. It seemed like every third person in the stands had the old dark alternate on. It was a total fan favourite.

I left the stadium Friday night satisfied with the game, but very confused about the fashion. Expect the home helmets and a well prepared team on the field next week, as these two teams play again in the first game of the regular season on June 25.