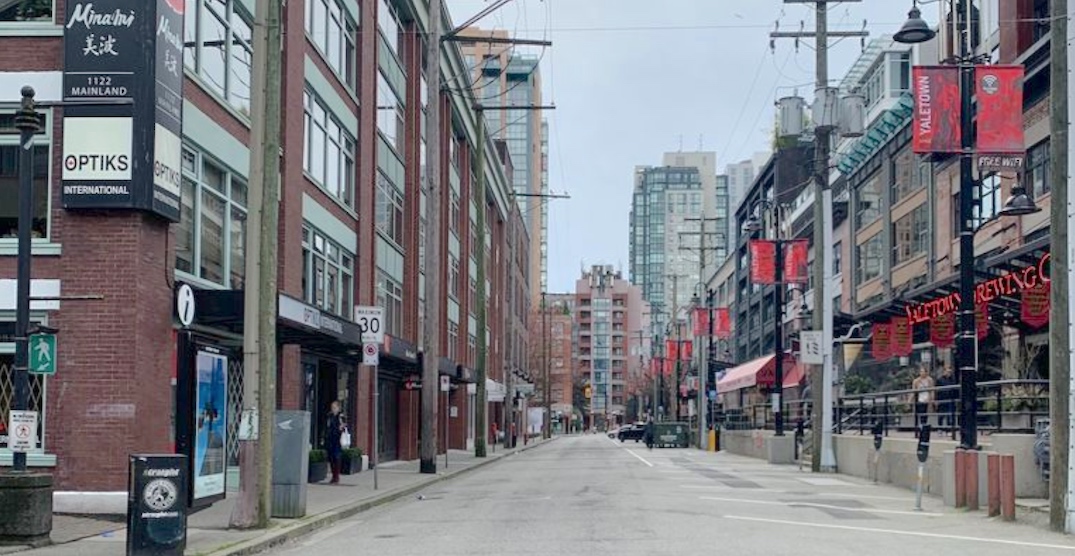 Empty streets in Yaletown in downtown Vancouver due to the coronavirus pandemic. (Karm Sumal / Daily Hive)

It is no secret COVID-19 is taking an unprecedented economic toll on British Columbia, but the findings of a new survey provide a glimpse into the scope of the impact on the provincial labour market and household finances.

According to Insights West, as of March 23 to 24, 17% of BC adults surveyed reported losing their job in the two week period prior to the survey, with the majority indicating this to be a temporary change at the time.

Another 30% stated they have been working with reduced hours, while 6% report they are now working more hours or are busier at work. As well, 11% indicate that their spouse has also lost their job.

Altogether, the pandemic has affected the employment and household incomes of about half of BC adults, and this translates to increasing concerns from these households over their ability to pay their bills.

The survey found that 49% are concerned about their ability to cover rent or their mortgage, including 24% who are “very concerned.”

Over half, 54%, are concerned with their capacity to pay household expenses, with 27% stating they are “very concerned” over these basic necessities.

When it comes to food, 49% indicate they are concerned about their ability to pay for household meals. This includes 23% expressing “very concerned.”

Moreover, three quarters — 76% — report they are concerned with the negative impact on their savings, RRSPs, and investments, with 68% believing this will have a years-long impact on their financial position.

With all that said, most respondents have given both provincial and federal officials a good rating for their pandemic response measures.

BC Public Health Officer Bonnie Henry tops the list, with 79% thinking she has done a good job with handling the crisis, followed by 72% for BC Health Minister Adrian Dix and 65% for Premier John Horgan.

Prime Minister Justin Trudeau, who has been working from home in isolation after his wife tested positive for the coronavirus, also received top marks of 67%.

It is important to note that this survey was conducted prior to March 25‘s announcement of the bulk of the federal and provincial emergency financial relief packages for both struggling residents and businesses.

Even with the announcement of the smaller federal relief packages on March 18, 79% of BC residents believe the aid will be effective, although only 16% think it will be “very effective.”

But mayors in BC saw a lower rating, with only 49% believing they are doing a good job. However, given that the federal and provincial authorities have the necessary powers and resources to respond to the crisis, 28% are not sure how to rate the job their mayors are doing.

Earlier this week, the provincial government also rescinded all local states of emergencies declared by municipal governments to help ensure a more coordinated and cohesive response under its provincial state of emergency.

Canada’s ability to manage the crisis also depends on the United States’ measures with tackling the crisis. Unsurprisingly, only 23% of BC residents believe President Donald Trump has done a good job so far.