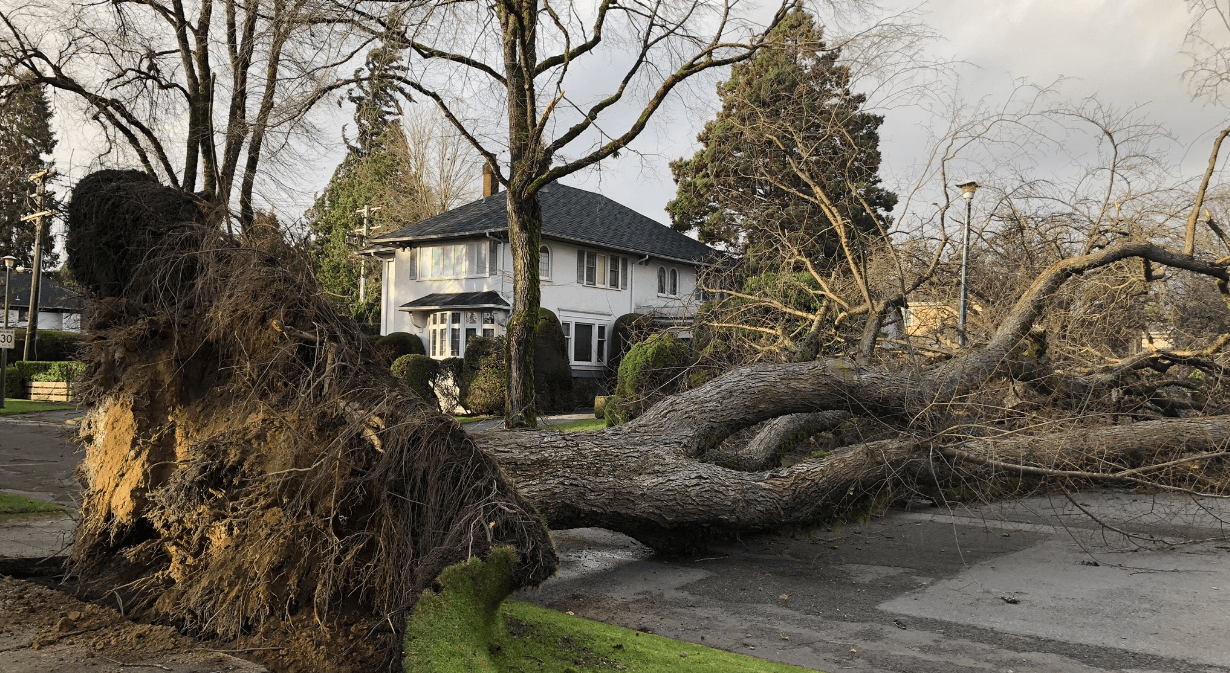 A downed tree in Vancouver during the windstorm (@4Echo13/Twitter)

After high winds pummelled BC’s South Coast just days before Christmas and left many without power over the holidays, BC Hydro now says the storm was the most destructive in the utility company’s history.

In a new report, entitled “Storm Report: The Most Damaging Storm in BC Hydro’s History,”  BC Hydro found that the storm on December 20 resulted in over 750,000 customers losing power, including over 400,000 customers in the Lower Mainland, and almost 350,000 – or about 80% of all customers – on Vancouver Island and the Gulf Islands.

These number make the storm bigger than the the August 2015 windstorm that affected the Lower Mainland and Fraser Valley, as well as the 2006 windstorm that hit Vancouver Island and devastated Stanley Park, the company said.

What made the storm so unique, according to BC Hydro, is the fact that the winds came from multiple directions, over 400 millimetres of rain fell in some areas leading up to the storm, and wind speeds in some areas topped 100 km/h, resulting in trees and branches crashing down on to BC Hydro’s electrical equipment.

“Responding to this storm involved our biggest mobilization of crews, equipment and materials ever,” said Chris O’Riley, BC Hydro President and Chief Operating Officer. “We had more than 900 field personnel working to repair damage to more than 1,900 spans of wire, 390 power poles, 700 cross-arms and 230 transformers.”

While BC Hydro said it is proud of the response by its crews and the timeframe in which power was restored, it noted there “are always opportunities for improvement in the future.”

For example, the company said, “some customers encountered challenges when trying to report downed lines because 911 operators in certain areas were overwhelmed with calls, while others expressed frustration when they could not find the status of their outage.”

The company said it is looking at ways to improve in both of these areas, and will be tallying the cost of the storm in the coming weeks.

“On behalf of BC Hydro, I want to sincerely thank our customers for their patience, and the kind words of support and encouragement,” said O’Riley. “We also want to thank the many businesses – small and large – that supported our crews while they worked to restore the power.”

He added that BC Hydro will “continue to work on improving how we respond to storms so we will be ready for the next event Mother Nature throws at us.”